Police in Germany have rejected body scanners at Hamburg airport for being too sensitive. The scanners were found to have set off an alarm in seven out of 10 cases after they were confused by clothing and even postures. 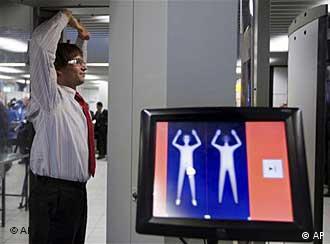 Body scanners are already in use in several EU countries

Body scanners at Hamburg airport have failed trial tests, police said, frequently triggering alarms even when they weren't supposed to.

The scanners, which have been an a ten-month at Hamburg airport, triggered an unnecessary alarm in seven out of ten cases, the German weekly newspaper Welt am Sonntag reported on Saturday.

They were said to have been confused by layers of clothing, boots, zip fasteners and even pleats. In 10 percent of cases the passenger's posture set them off.

According to a police report, the scanners set off alarms more than once in 35 percent of 730,000 cases where they should not have.

The scanners have been rejected by federal police until the software is improved and more effective models are made available.

Several EU countries, including Britain, France, the Netherlands, Italy and Finland, as well as Germany, have conducted body scanner tests after the machines were approved for use by the European parliament on July 6 on the condition that passengers could refuse to walk through them and go through traditional security checks instead.

Body scanners are controversial, particularly in the United States where people expressed outrage at the thought of their producing a graphic image of the body. The devices were often dubbed "naked" scanners.

In spite of the public wariness, the US stepped up their use after a Nigerian man was caught trying to ignite explosives concealed in his underwear during a Christmas day flight from Amsterdam to Detroit in 2009.

The US soon encouraged the EU to introduce the scanners, but it was decided that their impact on health and privacy would first have to be tested.

Within weeks, German air passengers in Hamburg will pass through full-body scanners before catching their flights. The scanners have raised fears about risks to health and personal privacy. (08.08.2010)

US Secretary of State for Homeland Security Janet Napolitano is meeting with EU officials in Spain on Thursday for talks on boosting security at European airports, including installing full-body scanners. (21.01.2010)