Airbus, the European maker of the new A380 "superjumbo," says it has agreed a deal to sell a record number of the new planes to Dubai-based airline Emirates in a deal worth an estimated $11.5 billion. 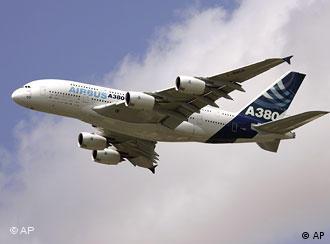 European airplane manufacturer Airbus has secured the largest order in its history, with the Dubai-based airline Emirates agreeing to buy 32 new A380 "superjumbos" for $11.5 billion (9.6 billion euros). The record deal was signed on the first day of the Berlin Air Show.

German Chancellor Angela Merkel, who opened the event, praised the A380 deal as exemplary for the entire industry.

The latest procurement for Emirates brings total orders for the A380 to 234, following significant delays and cost overruns caused by the fitting of each plane's 500 kilometers (300 miles) of wiring.

The deal brings Emirates' total A380 orders to 90 planes. The airline's chief executive, Sheikh Ahmed Bin Saeed, said he expected all 90 planes to be delivered by 2017.

"Our latest commitment signals Emirates' confidence in growth to come," he said at a press conference.

The sheer size and scope of the order stunned Emirates' global competitors. It has come as a surprise particularly in light of the sharp downturn in the aviation industry following the global financial crisis and the troublesome Icelandic volcano.

"It is already to many of us a miracle that Emirates now already has more seats on intercontinental routes than Air France and BA together with a relatively small home market," Lufthansa CEO Wolfgang Mayrhuber said in a briefing at the International Air Transport Association's annual meeting.

The Emirates airline is one of Dubai's largest companies and a significant contributor to the economy of the United Arab Emirates territory.

Lufthansa finally gets its first superjumbo

Airbus has delivered the first of Lufthansa's new giant passenger jets, three years behind schedule. The A380 superjumbo can carry over 520 passengers and cost 300 million euros. (19.05.2010)

EU seeks talks with US over aid for air giants

The European Union is seeking talks with the United States regarding a long-standing dispute over financial support for European aircraft maker Airbus and US firm Boeing, an EU trade official has said. (12.05.2010)

A German loan for the Airbus A350 jet project has attracted criticism from rival manufacturer Boeing. Germany said it would make more than a billion euros available, a day ahead of an international ruling on subsidies. (23.03.2010)