Airbus Crisis Deepens as France, Germany Fight Over Job Cuts | Europe | News and current affairs from around the continent | DW | 20.02.2007 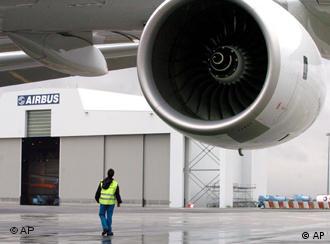 A day after Airbus delayed a key plan for a radical shake-up, the troubled European plane maker was plunged into paralysis by national tensions and bickering between French and German politicians.

France and Germany jointly control Airbus through ownership of its parent company EADS.

French Prime Minister Dominique de Villepin said Tuesday he had talked with German Chancellor Angela Merkel about Airbus's difficulties and confirmed that the company is seeking to slash 10,000 jobs as part of its restructuring plan. 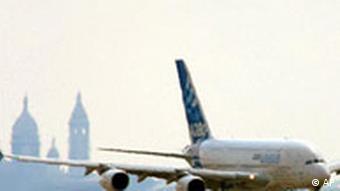 Airbus may be in for a hard landing

Though a German government spokesman dismissed de Villepin's statement as "only speculation," both French and German politicians are at loggerheads over how those 10,000 jobs are to be divided between French and German Airbus factories. Airbus employs 20,000 people in each country.

"The French are fighting for their jobs and their future role, and we as Germans cannot and should not settle for playing second fiddle," Ditmar Staffelt, SPD member in parliament and former government coordinator for aerospace issues told Reuters.

Analysts point out that Airbus is no stranger to conflicting national interests and political intereference.

The airplane maker is owned by EADS, a defence and aerospace company which is 58-percent controlled by French, German and Spanish interests which are either state-owned companies or companies with close ties to the state.

"With Airbus, it's always a double-edged sword: political interests on the one hand, economics on the other," said Horst Frey, a finance expert specializing in the automotive and aviation industries.

De Villepin said the issue of Airbus cutbacks would be discussed at a meeting between German Chancellor Angela Merkel and French President Jacques Chirac on Friday, raising hopes of a prompt political settlement.

Germany however has denied that the planned meeting between Chirac and Merkel will turn into "an Airbus summit."

The Franco-German deadlock comes on the heels of a delay of Airbus's radical turnaround strategy -- known as "Power 8" -- that was supposed to be announced Tuesday. 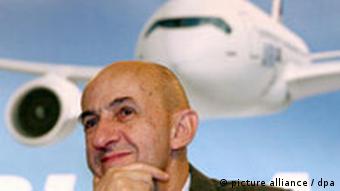 Louis Gallois is hemmed in by conflicting political pressures

EADS co-chief Thomas Enders -- a German -- rejected Airbus chief executive and Frenchman Louis Gallois's scheme for Germany and France sharing the work on the company's A350 plane, the Süddeutsche Zeitung newspaper suggested in its Tuesday edition, because he believed that Germany would be at a disadvantage.

Horst Frey said the postponement "shows that the German side succeeded in developing a common strategy."

"This means that recommendations from the French side must now be reworked and the cards reshuffled at Airbus," he added.

Frey said the delay is certainly to Germany's advantage to renegotiate its position.

The Tuesday edition of Germany's Frankfurter Allgemeine Zeitung paper called the delay in publishing details of re-organizing plans a "disgrace," with one editorial claiming that "it shows once again how big the danger is that Airbus will collapse under the pressure of national interests."

The paper said it was "understandable" that politicians were rowing over job cuts in view of the billions of euros of public money that had been invested in the company since the 1970s. "But it's not intelligent to get too fixed on one thing," it added.

French media too took a dim view of the political interference in Airbus's restructuring.

The French Le Figaro newspaper spoke of a "Franco-German divorce" of the Airbus marriage. The influential French newspaper Le Monde ran a headline "Airbus paralysed by egoism in Paris and Berlin" on Tuesday, saying that disagreements between the two countries were, if anything, worsening.

At the heart of the feuding lies the sensitive issue of jobs. Airbus employs around 56,000 people, around 23,000 in Germany and France each. 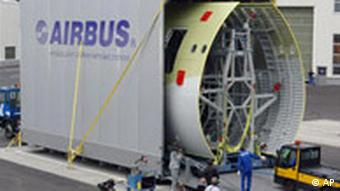 Both France and Germany are battling to avoid massive job cuts

Trade unions in both countries have said they plan to dig in their heels and defend all the jobs. Employment also remains a key issue in upcoming French elections.

One major bone of contention among French and German shareholders of parent company EADS is where Airbus' new mid-sized, long-haul A350 XWB jet is to be assembled. The plane is intended to be a rival to US aircraft manufacturer Boeing's mid-sized 787 and help Airbus out of its financial quandary.

Boeing, for its part, seized first place in the global aircraft market in 2006 for the first time in five years.

German workers are particularly fearful since their employer's cost-cutting plans were triggered by embarrassing delays in Airbus' A380 superjumbo jet. A plant in Hamburg has been blamed for much of Airbus's operating loss for 2006 due to the delays, which cost parent company EADS some five billion euros ($6.5 billion) in profits.

Unconfirmed reports have said some of the A380 production could be transferred to Airbus plants in Toulouse, France, which could also be the assembly site for the new A350.

Arne von Maydell, spokesperson for the department of economics and employment of the City of Hamburg, said that Hamburg "expected painful losses with regard to Airbus jobs," but said the city did not want to speculate how many could be at stake.

"We will await Airbus's decision about restructuring, but I'm optimistic that the company will distribute things fairly between Germany and France," he said.

European aircraft manufacturer Airbus delayed announcing details of its long-awaited rescue plan on Monday, pointing to renewed strains between Germany and France over where cuts will fall. (19.02.2007)

Airbus may be looking for companies to take over production sites threatened with closure under a major restructuring plan, said German state leader Christian Wulff, after talks with execs from Airbus parent firm EADS. (13.02.2007)