Germany's ailing car industry faces the prospect of slashing jobs as the global slump hits home. Dwindling demand and problems with liquidity have some of the biggest names in the business eyeing a bleak future. 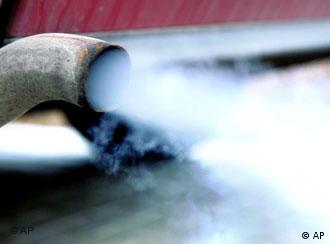 Germany's car industry has coughed up some serious problems

There's a saying in Germany that when Daimler coughs, the state of Baden-Wuerttemberg catches pneumonia.

Things are not yet quite as bad as that in the home of Mercedes-Benz, or in Germany in general. But strong medicine is needed to get Germany's ailing car industry back on its feet amid a slump in profits and sales.

The first dose was requested by Opel, once the nation's biggest carmaker, which has been brought to its knees by the massive losses suffered by its US parent General Motors (GM).

Opel has asked the German government for 1 billion euros ($1.27 billion) in credit guarantees to tide it over through a potential liquidity crisis that could arise if GM runs out of cash.

Chancellor Angela Merkel has promised a decision by the end of December, but insists that any funding would have to stay in Germany and not be transferred back to GM.

Opel, which employees 27,500 workers at four plants across the country, has already reduced production and sent workers home because not enough people are buying its cars.

Similarly, Daimler has extended the winter holiday for production staff. It recently announced that sales in October had slumped 18.1 percent over the year, to 93,900 vehicles. 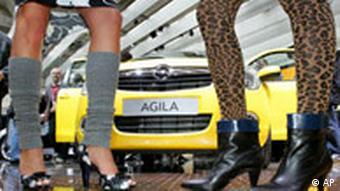 The global financial crisis has badly hit demand for new cars, triggering alarm in Germany, where an estimated one in six jobs is related to the sector, either directly or indirectly.

In the Stuttgart region of Baden-Wuerttemberg, where Daimler has its headquarters, 300,000 people depend on the car industry for a living. Porsche and auto supplier Bosch also have factories there.

Some 100,000 jobs in the industry could disappear by the end of 2009 unless concrete action is taken to shore up the sector, says Ferdinand Dudenhoeffer, a leading automotive expert at the University of Duisburg-Essen.

Willi Diez, a professor at Geislingen University's automobile economics department, believes car manufacturers could slash 25,000 jobs by the middle of next year, with the same number disappearing from companies that supply auto parts.

Workers at faltering Opel have much to lose 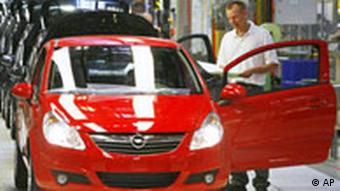 The Opel plant in Eisenach is currently on life-support

Car workers are concerned about their future in the 60,000-population city of Ruesselsheim, south-west of Frankfurt, where Opel is by far the biggest employer.

"It has all happened so quickly. And if our parent company collapses, then it is all over for us," said one of the 18,300 workers as he clocked off at the end of shift on Monday.

"Without Opel, we might as well as pack up," said Adnan Dayankac, chairman of a local association that includes many foreigners who work for the carmaker. "The whole city and the surrounding region depend on Opel."

The mood is not much better in the eastern German city of Eisenach, where 1,900 workers are employed at a plant that assembles the popular compact model Corsa.

Production was halted in Eisenach for three weeks in October. Many workers are worried that soon there might not be any cars at all coming off the production lines.

"We are afraid General Motors will pull us down with it into the abyss," said Harald Lieske, who has been with Opel since it began production in the east 18 years ago and now heads its workers' council. 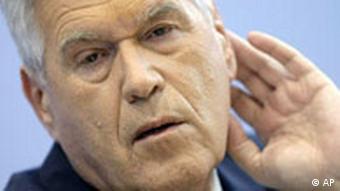 Those are alarm bells you're hearing, Herr Glos

German Economics Minister Michael Glos said he was optimistic that Opel would weather the crisis. He said Opel would have been better off had it remained a German-owned company and not become a subsidiary of GM.

Glos singled out the Opel's successful array of models, including the new family car Insignia. The Insignia was just voted 2009 Car of the Year by an international panel of auto journalists.

Whether this alone will help boost sales remains to be seen.

"It will take until 2010 before the market gets back to normal," Dudenhoeffer said. "By then, those manufacturers who present new models with fuel-saving technology will be in the driving seat."

The government is set to decide whether to grant ailing German carmaker Opel 1 billion euros in credit guarantees. DW's Karl Zawadzky asks whether state support is really the way to go. (18.11.2008)

Governments should let failing companies like GM and its European subsidiary Opel go under if they suffer from weak management that can't master a declining economic environment, a Fortune 500 CEO told DW-WORLD.DE. (18.11.2008)

German Foreign Minister Frank-Walter Steinmeier joined the debate over whether the ailing European car industry should be saved by individual countries by calling on the EU to consider a Europe-wide rescue package. (18.11.2008)