The 99-year-old who became famous for his charity walk, has now achieved the remarkable feat of being the oldest to have a number one song in the UK. He reached top spot with a rendition of "You'll Never Walk Alone." 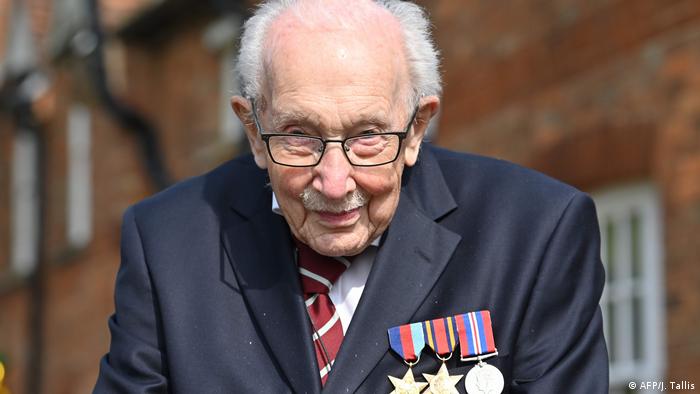 Tom Moore, the 99-year-old who shot to fame raising millions for Britain's National Health Service (NHS), has become the oldest person ever to get to No. 1 in the UK singles charts.

Moore reached the lofty position after releasing a version of "You'll Never Walk Alone," the song made famous by Gerry and the Pacemakers, as well as being the anthem for Liverpool Football Club.

The cover version, which includes singer Michael Ball, was set to be beaten to top spot by The Weeknd with his song "Blinding Lights" until the Canadian star asked his fans on Twitter to support Moore's single instead. Moore thanked his pop rival for the gesture.

"What wonderful news to receive today, a No. 1 single and a record breaker too. My grandchildren can't believe I am a chart-topper," the 99-year-old told BBC Radio 1's Scott Mills.

Moore wanted to express his gratitude to both the people who donated and the health care workers he raised millions for by walking 100 laps of his garden last week.

"My charity walk has raised more money than I could have possibly imagined and I am so thankful to those who have donated money ... for our incredible NHS during these difficult times," he said. "They've done so well for me over the years. I think they are doing such a magnificent job at the moment under very difficult circumstances."

"These really are Guinness World Records titles for all of us," the World War II veteran said in reference to those who donated and the NHS workers fighting to contain the coronavirus outbreak.

The records just keep tumbling for Moore and he is on the verge of another milestone as he turns 100 on April 30.

From the European Commission's Ursula von der Leyen to the more musical performers such as Elton John, public figures have joined the event against climate change, COVID vaccine inequality and famine around the world.