A bouncing space cube from Germany has left on a first-of-its-kind mission: to land on an asteroid and examine the surface at multiple spots on the cosmic rock. 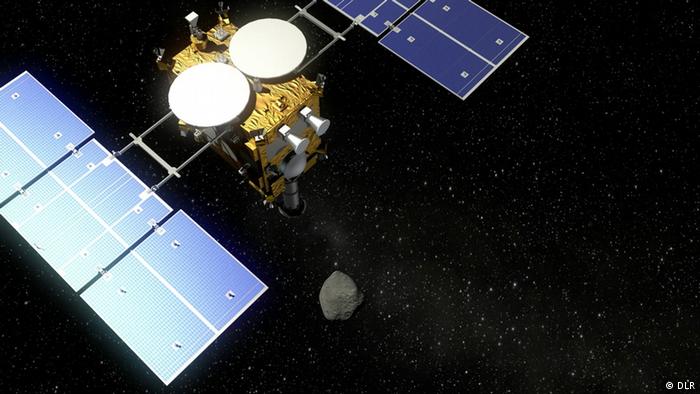 MASCOT stands for Mobile Asteroid Surface Scout. The bouncing space cube from Germany has left on its mission on Wednesday on board the Japanese space probe, Hayabusa 2.

The probe and lander will be on their way for four years before they reach their goal: asteroid 1999 JU3.

Asteroids offer researchers the hope of looking back in time to the early phase of our solar system and the development of our planet.

The cosmic rocks were created more than four-and-a-half-billion years ago from a huge cloud of dust and gas, as all celestial bodies in our solar system.

During an early phase in their development, some got stuck in Jupiter's orbit and formed an asteroid belt between Jupiter and Mars.

Some of these rocks were pushed into further orbit. They now circle the Earth. Asteroid 1999 JU3 is one of them.

"Our destination asteroid 1999 JU3 belongs to a group of asteroids close to Earth," says Ralf Jauman, professor at the German Aerospace Center (DLR) for planet research in Berlin. "Telescope measurements from Earth indicate it may hold water."

It's an interesting thought, leading to the question: did asteroids bring water to Earth?

After reaching the asteroid, Hayabusa 2 will travel around the cosmic rock to map it. 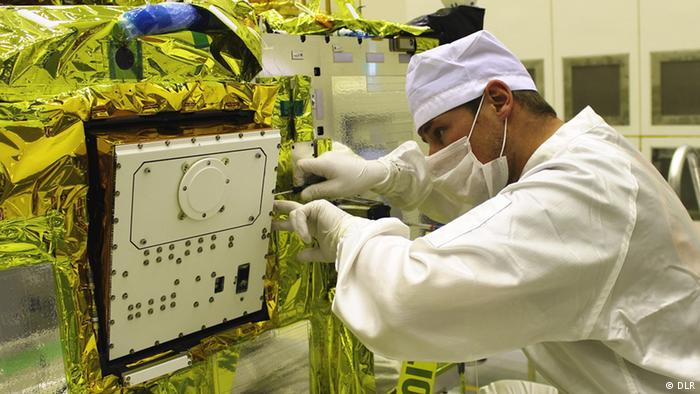 MASCOT has been thoroughly prepared for its mission

After that, it will be MASCOT's big moment.

The ten kilogram space cube will fall 100 meters (328 feet) to the asteroid. For the free fall, MASCOT is protected by a sturdy and light shell.

"It's important to calculate the exact right moment before we separate the lander from the space probe," says Tra-Mi Ho, project director at the DLR's Institute of Space Systems in Bremen.

Asteroid 1999 JU3 has a diameter of only one kilometer (0.62 miles) and only a tiny fraction of the Earth's gravity. This will call for the utmost precision during the landing attempt.

In November, the European Space Agency managed to put a lander on a comet for the first time.

Touch-down was the most critical phase for Philae, the lander on the space probe, Rosetta.

The mini-robot bounced twice before it came to rest. Its position made it difficult to collect samples.

By comparison, Philae's destination comet, 67P/Churyumov–Gerasimenko, has a diameter of four kilometers - which means higher levels of gravity than await MASCOT on asteroid 1999 JU3.

The space cube MASCOT will use sensors to know what is up and what is down.

It should be able to orient itself after landing and turn itself right-side-up if necessary.

Once the lander has collected all the data it can at one location, it will jump to the next and continue to take samples there.

MASCOT can bounce up to 70 meters from one spot to the next. 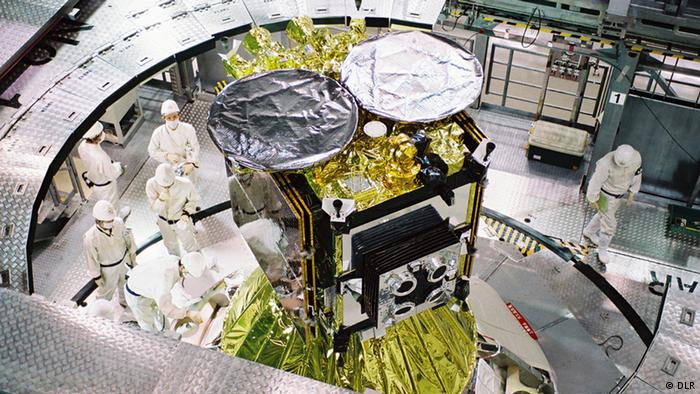 Ready to go: the lander in its transport capsule

A special camera will take pictures of the surface during MASCOT's descend and once it has landed it will start sending back data, for instance, the shapes and sizes of the things it finds.

Using this data, researchers hope to be able to reconstruct the history of the asteroid's development.

Space probe Hayabusa 2 will also collect soil samples. To do this, it will extend a nozzle and vacuum up dust particles that are swirled up by projectiles fired onto the ground. The probe should deliver these samples to Earth by dropping them in a capsule.

"MASCOT is the puzzle piece in the center of all our measurements," says Tra-Mi Ho. "It's basically the link between the data that the probe gathers and the lab analysis we do of the samples."

The lander will work on the cosmic rock for two asteroid days, a total of 16 hours. It is also carrying names and messages from Earth on little pieces of foil that are attached to MASCOT. They will remain on the asteroid together with the bouncing space cube.

The European Space Agency comet probe Philae has successfully transmitted data back to earth after drilling into the comet's body. Before entering enforced hibernation, the probe delivered "science from an alien world." (15.11.2014)