Africa and World War I

A million people died in East Africa alone during World War I. Many Africans also fought in Europe, defending the interests of their colonial masters. Today, their sacrifice has been largely forgotten. 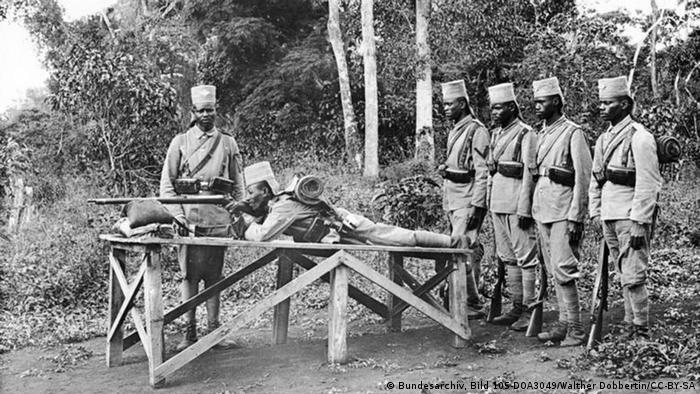 The most impressive monument for African victims of the World War I (1914-1918) is not to be found in Africa but in France. At the battle of Delville, one of the engagements of the Battle of the Somme in 1916, the South African 1st Infantry Brigade sustained heavy casualties. John Del Monde knows the site well. He is a member of the board of the South African Legion veterans' association. Together with partner associations from other Commonwealth member states, he has made it his life's work to keep alive the memory of all those who fought for the British monarchy. To mark the 100th anniversary of the start of World War I, ceremonies are being held in South Africa and Namibia and a new monument unveiled in Flanders, Del Monde told DW. 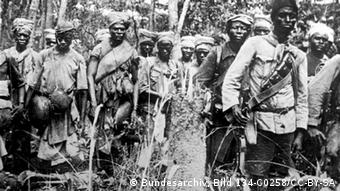 Some 10,000 South African soldiers died in Belgium, France, Pakistan, North Africa and former German colonies in Africa. The South African Legion is one of the few bodies in Africa which honors their sacrifice. There is limited knowledge about WWI among the black African population, Del Monde says. During the conflict, some 2 million people from across Africa were actively involved in the military confrontations, as soldiers or bearers, in Europe and in Africa. At the start of the war, some Africans volunteered to take part, encouraged by the prospect of a modest income. From 1915, the Europeans began conscripting thousands of African men. The French alone sent 450,000 African soldiers from their colonies in West and North Africa to fight against Germany on the frontline in Europe.

One million killed in East Africa

When war broke out in Europe in 1914, English and French troops prepared to seize the four German colonies in Africa (German East Africa, German South-West Africa, Togoland and Cameroon). Fighting was particularly brutal in German East Africa where German General Lettow-Vorbeck adopted a guerilla strategy, drawing more and more areas into the war. More than 200,000 bearers transported weapons, ammunition and food for the troops. The myth of the "faithful Askari" (the Swahili word for 'soldier') still exists today in German history books.

In reality these men had been torn from their roots and were looked down on by local populations. Back home, they were missed in the fields. Harvests suffered or were plundered and destroyed by troops passing through to ensure there would be no food left for their pursuers. 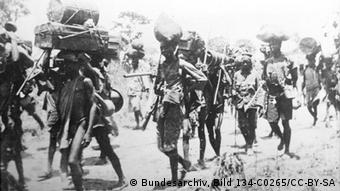 African bearers were looked down on by soldiers and local populations

There are no accurate figures saying how many people died of hunger. The fact that the colonial administrative area of Dodoma in what is now Tanzania lost 20 percent of its population in 1917/18 gives some indication of the deprivation and misery. Historians estimate that a million people died in East Africa as a direct result of the war. The outbreak of Spanish flu, which spread rapidly among the weakened population shortly after the war ended, accounted for a further 50,000 to 80,000 deaths. "The war changed some regions to such an extent that they needed decades to recover, if indeed they did recover," sums up Jürgen Zimmerer, history professor at Hamburg University.

In today's Tanzania, which made up a large part of the former colony of German East Africa, the 1914-1918 war is largely absent from public consciousness. The country's National Museum told DW that no memorial ceremonies were planned. It's no different in Cameroon, also a former German colony, where several thousand black soldiers and bearers died. Jean-Emmanual Pondi, head of the Institute for International Relations in the capital Yaounde, told DW that WWI features less and less in school curricula. "It is a memory that is steadily disappearing," he said. "The protagonists are long dead. They were our great grandparents!"

For Germany, defeat also meant the loss of all its African colonies. They did not, however, become independent but simply acquired new masters: Britain and France. When the victorious powers signed the Treaty of Versailles to seal the end of the war, they laid down peoples' right to self-determination. But this did not apply to Africa. The delegation of the South African National Congress which had travelled specially to Versailles was not received. Change came to Africa much later. According to historian Zimmerer, "the real collapse of the colonial empires is linked to the end of the Second World War." It was the gradual spread of independence through Africa that began in the early 1950s that represented real change and which is now marked with anniversary celebrations and national holidays. 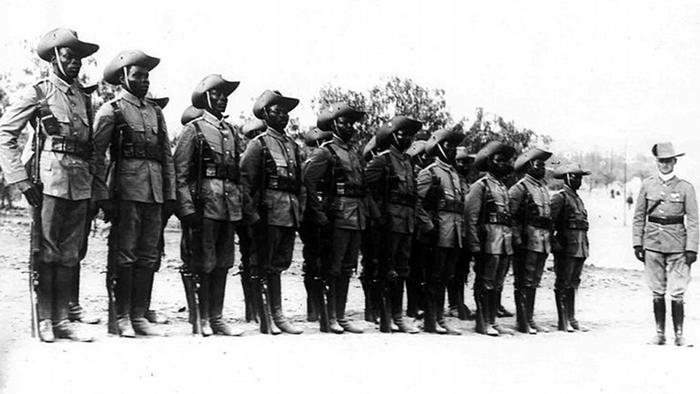 A Cameroon unit on parade in German South-West Africa

Another reason why WWI plays little or no role in the African view of history is the fact that it is generally seen as just one episode in the long history of colonial conquests and acts of brutality inflicted on the people of Africa. During the 75 years that Belgium ruled the Congo, up to ten million people died. "It is just one war among many," Zimmerer says. "Colonialism was so brutal that a number as large as one million does not attract the attention that it should - or would in a European context."

Europe also takes this view and generally ignores the suffering of millions of Africans in the World War I. In Zimmerer's words, the war in Africa " is generally treated as just a minor skirmish in which hardly anyone was hurt."