Afghanistan's former President Burhanuddin Rabbani was to be buried on Wednesday as fears mounted that his assassination could push the country towards civil war. 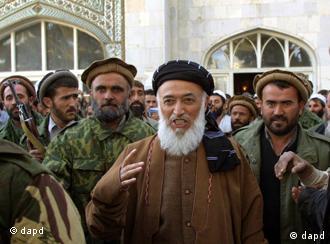 Burhanuddin Rabbani was president from 1992 to 2002

Security was stepped up in the Afghan capital on Wednesday, as hundreds of people carrying banners and pictures gathered on the street where Burhanuddin Rabbani lived to mourn the former president, who was due to be buried later the same day. Students from Kabul University also protested against the government.

Rabbani, who was officially president of Afghanistan from 1992 to 2002, is perhaps the most prominent Afghan to be killed since the fall of the Taliban in 2001, and is the latest victim in a string of high-profile assassinations. Observers said his killing was a strong statement of Taliban opposition to peace talks.

As head of the High Council for Peace, Rabbani was at the front of government attempts to broker peace with the Taliban.

According to the police, he was killed by a man purporting to be carrying a special message from the Taliban leadership who hid the explosives under his turban. An anonymous source told Reuters Rabbani had come back from Dubai to meet two apparently senior Taliban leaders.

Peace Council member Fazel Karim Aymaq said that the two visitors, who claimed to have "special messages" from the Taliban and were thought to be "very trusted," were escorted through layers of security without checks.

Minutes after the assassination, President Hamid Karzai broke off his trip to the US where he was attending the UN General Assembly in New York. He insisted that the peace process would not be derailed by the killing.

However, observers warned that the assassination underscored the sharp deterioration in security in Afghanistan. The fact that Rabbani was a Tajik could also upset relations between Afghanistan's different minority groups and the dominant Pashtun community.

"Karzai has lost one of his most important colleagues," said Ahmad Zia Rafat a journalist and professor at Kabul University. "Thanks to him, Karzai was able to win the trust of part of those parts of the population who do not belong to the Pashtun majority."

From academic to mujahedeen

Rabbani started his career at university, teaching Islamic Studies for four years in Kabul before going to Cairo. He returned to Afghanistan in 1968 and entered politics, joining the fundamentalist Jamiat-i-Islami party, whose head he later became. In 1974, he was able to escape arrest by fleeing over the border to Pakistan with the help of his students. He then took up arms against the communists after the Red Army invaded Afghanistan in 1979. His group became one of the most successful resistance groups in the battle against the Soviets.

After the resignation of Mohammad Najibullah Ahmadzai and the setting up of the Islamic State of Afghanistan, Rabbani came back to Kabul as president of Afghanistan in April 1992. However, he was not supported by all the mujahedeen who had also fought against the Soviets and civil war broke out in the country. According to certain estimates, 80,000 people fell victim to the clashes in Kabul alone. Rabbani was driven out of Kabul by the Taliban in the mid-1990s but he refused to step down as president.

He was eventually forced to do this at the end of 2001 after US troops ousted the Taliban and Hamid Karzai was brought in to head the new interim government. Aware of Rabbani's influence, Karzai gave him various roles in his government; his final task as head of the High Council for Peace was to find a path towards serious peace talks with the Taliban. Initially, Rabbani praised the Taliban, saying they were open to "reasonable suggestions."

His attempts to bring the Taliban back into the fold of politics in Kabul were by no means disinterested - Rabbani was no great supporter of democracy. He despised the free media and rejected all forms of criticism. As a fundamentalist, he was somewhat closer to the Taliban than to the democrats in Kabul. Insiders say that he had called for the democratic constitution to be altered and for an Islamic state with an "Islamic press" to be established. Recently, he warned against the "destructive power of youth" in a public speech about the Arab revolutions, saying that young people should be denied access to the Internet and social networks.

He had even set up his own television channel "Noor TV" that advocated the peaceful return of the Taliban. However, more recently he had become despondent, disappointed by the Taliban’s constant rejections of his advances. He even said that the Taliban, who denounced him as a US lackey, seemed to have given up all aspirations for peace. His assassination highlights this fact very clearly.