AfD candidate in hot water over Breivik statements | Germany | News and in-depth reporting from Berlin and beyond | DW | 21.04.2017

Right-wing populist Jens Maier is accused of having expressed understanding for Norwegian mass murderer Anders Breivik. His remarks could spell the end of his political career. 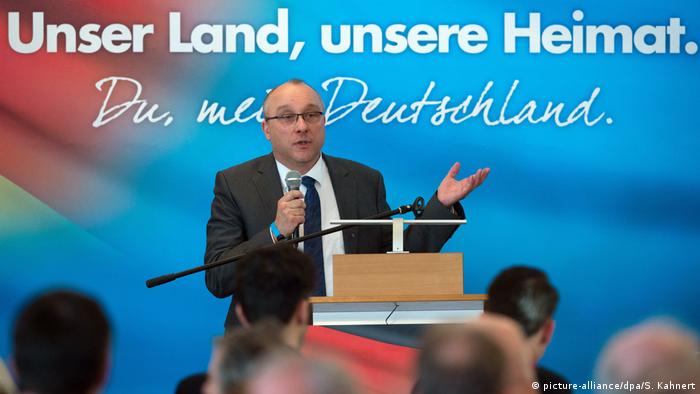 Journalists from two German newspapers said that they observed right-wing populist Alternative for Germany (AfD) candidate Jens Maier making the controversial statements on a livecast of an event hosted by the far-right magazine "Compact" on April 20.

"Breivik became a mass murderer out of pure desperation," Maier, who works as a judge in a Saxony state court, was cited as saying by the newspaper "Vorwärts," which is associated with the Social Democratic Party (SPD).

With the mass migration of "people foreign to our culture," Maier was further quoted as saying, "isn't all of that enough to drive someone crazy?"

The magazine has since erased the video. In 2011, Anders Breivik killed 77 people in what he later claimed was an attempt to defend Norway against "Islam and cultural Marxism."

Maier told "Spiegel" magazine that he didn't excuse or downplay the seriousness of Breivik's crimes. But Spiegel cites another radical ring-wing speaker who took to the podium after Maier criticizing his "very awkward choice of words."

The result could be negative consequences for Maier's political future, as the AfD gets ready to hold its party conference.

Maier is one of the more prominent figures within the hardliner wing of AfD. He was one of the other politicians who spoke at the Dresden event in early January that saw the head of the AfD in Thuringia, Björn Höcke, accused of Nazi sympathies.

The executive board of the AfD in Saxony, where Maier is from, subsequently took initial steps to ban him from the party. Nonetheless, he was recently elected to the second position on the party's list of candidates in Saxony for Bundestag seats - giving him a good chance of becoming a member of the German parliament in September.

That could now be in jeopardy.

"The video of the event definitely has to be evaluated," AfD board member Carsten Hütter told Spiegel. "If these quotes are true, there will have to be consequences. A ban from the party would be the only proper reaction."