A country polarized by recent elections has been brought together by the progress of its footballers. The Scorpions flew the flag for a generation that believes in its ability to propel its country to greatness. The Gambia's progress is inspiring and uniting the fans back home

Everyone agrees that The Gambia would never have made it to the Africa Cup of Nations if the tournament had not become a 24-team event. But their run so far has shown why that expansion was needed.

The Scorpions, ranked 150 in the FIFA standings, arrived at their first AFCON tournament as the lowest-ranked team. On Saturday, it took a 2-0 loss against Cameroon to finally bring an end to their fairytale run.

How did a team from a country of less than two million people get that far? The Gambia defeated Mauritania 1-0 in their opening game, drew 1-1 with Mali and sneaked a late 1-0 win against Tunisia in the final game of Group F to finish second.

Bologna's Musa Barrow then sent them through to the quarterfinal with a beautiful goal against Guinea in the last-16.

"We went back to basics to make sure that we developed football from the grassroots," Baboucarr Camara, director of marketing and communications of The Gambia Football Federation (GFF) tells DW.

The hunger of a generation

Scenes of celebration have flooded social media since the Scorpions began their campaign.

Young Gambians have been running into the streets to celebrate their team's impressive showings. Videos of fans streaming onto the central Westfield Junction in the capital city, Banjul, have gone viral as they honk from their cars and toot their whistles waving the country's flag in the nightly celebrations.

Tom Saintfiet's team has given voice to a generation of young Gambians who have shown a hunger for success despite the tough conditions that they face. 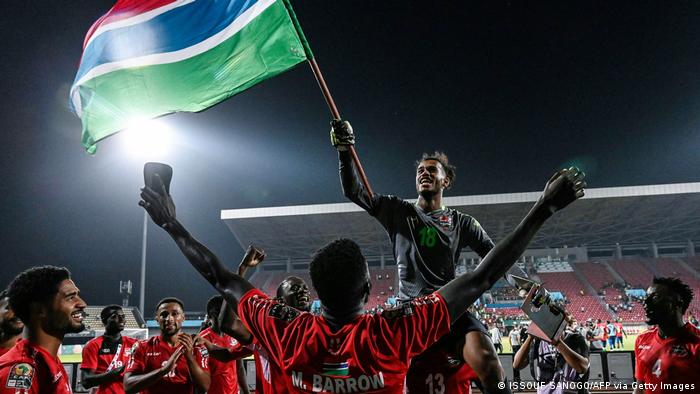 The Scorpions are inspiring a generation of young Gambians

Until six years ago, Gambia was under the iron rule of Yahya Jammeh, the dictator that ruled the country for more than two decades. His reign left Gambia as a caricature for homemade HIV/AIDS remedies instead of herbal remedies, as Jammeh paraded himself as a faith-healer leader with a long string of self-proclaimed titles.

As his rule deepened, so did the misery. Young Gambians took to their heels, migrating in thousands across the Sahara to Europe in search of better lives.

A handful of the Scorpions' players fled to Italy where they now play in Serie A - Ebrima Darboe at Roma, Musa Barrow at Bologna, Ebrima Colley at Spezia Calcio. The talent is shining through and showing that The Gambia can compete internationally.

"We have produced a group of talented footballers who are playing in some of the best leagues in Europe," explains Momodu Jallow, a sports expert with the Gambian national broadcaster. "This has helped the team to compete against the big guns of African football,"

Jammeh's election defeat by Adama Barrow brought a change of government. But recent elections in December threatened to open old ethnic wounds as Barrow won a second term in office with the poll results contested by his opponents. Those animosities have been put aside as the Scorpions progressed in Cameroon.

"The team has united our country," says Omar Jarju, editor of Banjul's The Chronicle newspaper. "Politicians have put aside their strife and got behind the team. Everyone is happy to see the boys doing well."

This unprecedented footballing success has provided many young Gambians with new role models of their own.

The national team is leading a resurgence of pride for Gambians who have had to live in the shadow of larger neighbours Senegal for many years. They watched the Teranga Lions reach the quarter finals of the 2002 World Cup and dominate the continent with the stars of their golden era.

"Growing up, as young boys, we looked up to Senegal's El Hadji Diouf and Khalilou Fadiga as well as Nigeria's Austin Okocha as role models. But now young boys proudly call themselves Musa Barrow or Ebrima not Abdulie Colley on the football field," Jarju says. 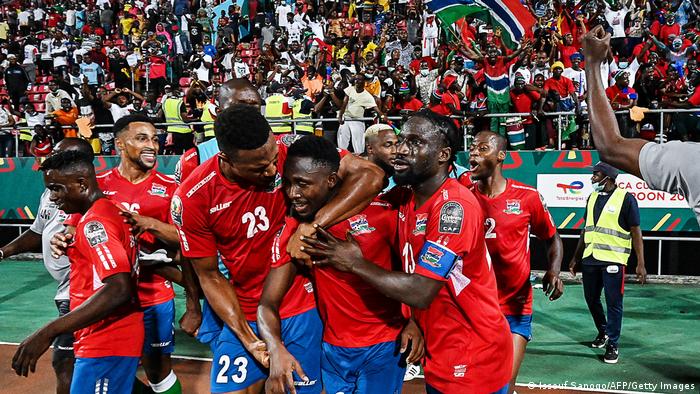 Young Gambians want to be like their national team heroes

Now Gambians are dreaming of one day winning the AFCON and also qualifying to play at the World Cup. Despite falling short against the host nation, their impressive performance in Cameroon has given them the confidence that they can compete with the big boys of world football.

With proper planning, The Gambia could take its place among the biggest teams on the continent. When Saintfiet took over in 2018, he was tasked with making the country a competitive force in football. The Belgian has done just that.

"We are here to reach our limits, to build the team of the future," coach Saintfiet told media. "I want The Gambia not only to be in this quartefinal, but again in 2023 and 2025, and at the World Cup in 2026 when nine African countries will be able to participate."

To make that happen, The Gambia will need to put a lot of things in place. The country has just one stadium and runs an amateur league.

"We need to invest in infrastructure," says Jallow. "We need better financial investment in football, a professional league, capacity building for referees, coaches and medics.

"We hope that investors will come to invest in football at the grassroots level to help us grow," says Camara of the GFF.

But despite the current euphoria, Jarju sounds a note of warning:

"We need to make our presence felt on the continental scene. We must establish ourselves as a powerhouse. We shouldn't be carried away by our first appearance, we need to build from here."