Abdullah Yameen has been elected president of the Maldives, with opponent Mohamed Nasheed conceding defeat. Yameen defeated the pre-poll favorite in an election runoff. 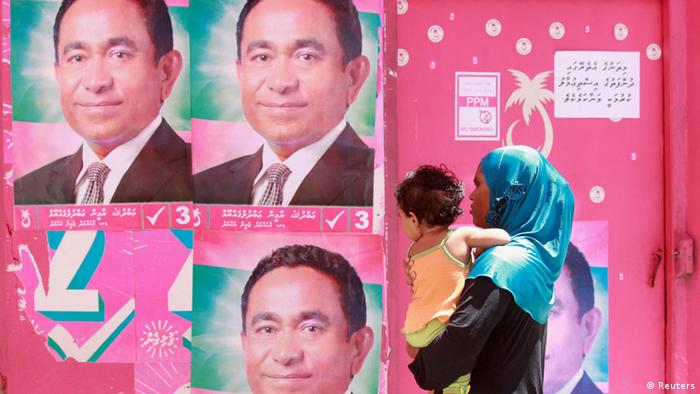 Initial results pointed to a Yameen victory, with the elections commissioner confirming Sunday morning that Yameen had claimed just over 51 percent of the vote in the head-to-head race.

The runoff had been necessary after Nasheed won the first-round vote last Saturday by a wide margin but failed to secure the 50 percent needed.

Voter turnout for the runoff was 91.4 percent of the 239,165 Maldives citizens eligible.

Nasheed conceded hours after reports of his defeat began to surface, and told his supporters that the result would not be contested: "This is a happy day for Maldives. We've always been calling for an elected government. That call ... has been answered. We won't look to challenge this in court."

At his first press conference as president, Yameen thanked Nasheed and spoke of the need for stability in the Maldives.

"The election went very smoothly and peacefully. The Maldivian citizens have stated their decision clearly."

The result brings to an end a period of uncertainty over the leadership of the island nation. Mohamed Waheed's term as president official ended on November 11, but three prior attempts to elect a new leader - the first in September - had failed to reach conclusion.

International scrutiny had turned on Maldives as a failure to find a democratic resolution to the country's standoff continued. Waheed stayed on past the end of his term, ostensibly to fill the constitutional void.

One poll attempt had been declared void and the following two elections canceled by the Supreme Court. The country's Supreme Court consists of several judges appointed during the autocratic 30-year rule of former rule Maumoon Abdul Gayoom - the half-brother of Yameen.

Nasheed, a former human rights campaigner, was attempting to regain the presidency he won in 2008 before his resignation in February 2012. Nasheed still maintains he was forced to resign at gunpoint, while Waheed claims the transfer of power was voluntary and constitutional.