Abandoning Christianity: The young adults who are moving on | World| Breaking news and perspectives from around the globe | DW | 23.12.2014

Young Christians are turning their backs on religion and finding different ways to practice values that they consider unchained from faith. But what is it that’s making them decide to move on? 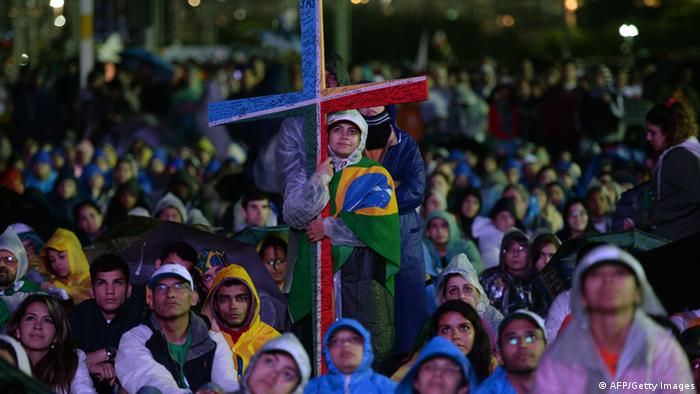 Young people attend the welcoming ceremony for Pope Francis on World Youth Day in Rio de Janeiro 2013. Unlike young believers in South America, young people in other regions are not as convinced of the Christian religion anymore.

“It’s touching when I see my own grandmother, who is strictly religious, in church - she sings and really embraces the spirit of ‘love thy neighbor as thyself’,” she says. “But as soon as she steps out of the church, her intolerance in regard to homosexuals, girls who are not wearing enough, my ex-boyfriend and his different religion or people with another skin color, it knows no limits.”

Julia was baptized and grew up in a Roman Catholic family. But eight years ago, after moving away from home to study, she finally chose to make the jump away from her faith.

The 28-year-old is not alone. She is one of an increasing number of young adults, who are turning away from religion. Those in their early adult years are “less likely to affiliate with any religious tradition or to identify themselves as part of a Christian denomination”, according the US-based Pew Research Center.

Despite Christianity being the largest faith with 2.2 billion believers worldwide, a study published by the center in 2010 as part of a #link:http://www.pewforum.org/2010/02/17/religion-among-the-millennials:series on Millennials# found that a quarter of adults under 30 consider themselves to be unaffiliated with a religion and describe themselves as atheist.

“It is relatively easy to give up the commitment to Christianity, to say, ‘yes, I see myself as Christian, but I don’t go to church anymore’,” says Detlef Pollack, professor of religious sociology at the University of Münster. “For Muslims in Europe it’s different, because they belong to a minority that needs to stand its ground against a Christian majority.”

Christianity is still accepted - as part of the European culture

And although many people don’t regard themselves as Christian anymore, they accept Christianity, like other socio-philosophical concepts such as the Enlightenment, as part of European culture. “Over all, one can say that people still appreciate it when children have a Christian upbringing,” says Pollack.

“However, families are passing down their beliefs and religious practices less and less,” he says. “As a consequence, most people are not familiar with what kinds of religious practices there are and what is said during mass. And this means, people don’t get involved in religion, that they are more skeptical of the Church and that people are operating on a basis of misunderstanding.”

Much of this skepticism lies with the institutions and rules surrounding many religions - rules that many, like Julia have begun to question. As well as being fed up with the intolerance, she says it was the authoritative nature of the Church that also influenced her decision to leave - a choice she says she does not regret.

“Christianity is nothing more than an association, of which you can be a member,” Julia says.

And it’s similar for Sonya, a US citizen who lives in Germany and also decided to leave her faith behind. Even though her mother was Catholic and she was unofficially baptized, she isn’t religious at all. At a young age, her mother married a Jewish man and converted to Judaism, but this hasn’t influenced her either. “I am rather agnostic. I don't really believe in god,” she says.

Instead, she believes religion to be one of the major reasons for some of the world’s problems. “I don't care if someone is religious themselves, but I have a real problem with missionizing and jihad or holy wars,” she adds.

Still, despite her doubts about religion, Sonya still considers herself a spiritual person. She believes in values like charity and forgiveness - all considered also Christian values.

Within his research Pollack found out that such values are more likely to be accepted when they are generalized and not specifically tied to Christianity - something with which Julia says she agrees.

“I think every religion touches on universal feelings that all humankind has - I would also agree with values from other religions as well,” says Julia. “The values have a good intentions, they’re helping people who need a structure in life and give them hope in times of hardship.”

In such modern times, as young people consider giving up their faith, it is such universal values that may remain the link between non-believers and Christianity - but only if the institutions driving religion start to liberalize the conditions of being a member to be more inclusive.

“The power of Christianity has not been extinguished,” says Pollack. “But it would find more acceptance if the rules were not so contentious.”