The future of the A400M military transporter plane hangs in the balance after the seven European nations that have ordered the plane insist there will be no funding beyond what has already been agreed. 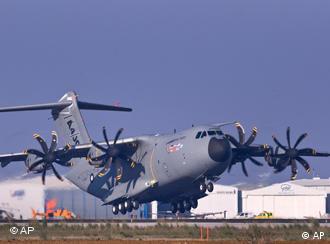 The seven European NATO countries that are due to buy the A400M military plane from Airbus parent EADS have refused to engage in any further negotiations on the funding of the plane.

A spokesman for the buyer nations said on Friday that they would stick by a cost increase of two billion euros ($2.7 billion) and export guarantees of 1.5 billion euros, both of which had been agreed on Monday.

Sources familiar with the talks said on Thursday that EADS had agreed the core package of 3.5 billion euros of support with buyers, but that it wanted to renegotiate a price-inflation clause and defer installation of some complex military equipment.

There are also question marks over how the export guarantees of 1.5 billion euros would be structured, which is could hold up EADS' earnings report, scheduled for March 9.

EADS has been trying for months to secure the future of the A400M. The total costs were initially set at 20 billion euros, but have now risen to an estimated 27.6 billion euros. That makes it Europe's biggest arms project.

Most of the planes are slated for delivery to Germany, the other buyer nations are Britain, France, Belgium, Spain, Luxembourg and Turkey.

EADS chief executive Louis Gallois and Airbus CEO Thomas Enders had threatened to scrap the project altogether if the buyer nations did not agree to take on some of the extra costs.

Almost two years behind schedule, the military transport aircraft has finally completed its first test flight. Parent company EADS now says the delays will lead to further billions for the buyers to cover. (11.12.2009)

Thousands of Europeans are employed building the 180 A400M military transport planes ordered by seven countries. But the project is billions of euros over budget, years behind schedule and in urgent need of funding. (12.02.2010)

European airplane manufacturer Airbus has announced that it has beaten rival Boeing in terms of aircraft production for the past year. However, the company needs some help with its problematic military plane project. (12.01.2010)