A Prison Hosts Germany's Library of the Year

It may sound odd, but it's true: a small, closed-to-the-public library at a prison in Münster, in west-central Germany, has received the national Library of the Year award. 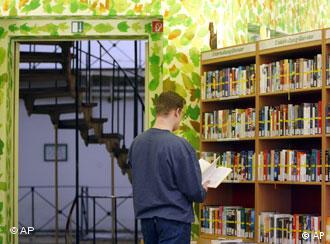 The library opens up a whole new world to prisoners

It's like a bookworm's paradise in prison. The large room is filled with bookcases which reach nearly to the ceiling; the rest of the space is lined with mirrors. The ceiling itself is painted with green leaves, to allude to the vines of ivy that rope themselves along the prison walls outside.

One could almost forget that one is in a prison if it weren't for the bars on the windows and the grates over the lights.

Three men -- a librarian and two prisoners in blue uniforms -- sit at the desk where readers can borrow books. The prisoners help the librarian with checking out, sorting and even repairing books.

Behind them is a shelf lined with literature on law. 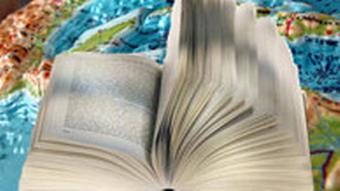 The library is divided into different sections. In one of them, users can look at a catalog list and order books. In another area, they can pull out actual books they want to borrow.

That is what was so convincing to the jury, which decided on the national "Library of the Year" prize awarded by the German Library Association and the Zeit-Foundation Ebelin and Gerd Bucerius.

"The jury was interested in the service offered to users and what is made possible in a detention facility," said Barbara Schleihagen, managing director of the German Library Association.

The JVA-Münster prison library even beat out heavyweights, Munich Municipal Library and the university library in Karlsruhe, in the competition for the 30,000-euro ($43,000) "Library of the Year" prize.

"Also important were the comprehensive presentation of the collection and the attempt to provide literature for the prisoners from 50 different countries," Schleihagen said. "A collection of works in 30 languages is unusual."

Limited selection in other prisons

A prisoner named Oliver O. cherishes the library. Before he was moved to the drug treatment center at the JVA-Münster prison, Oliver spent time in jail in Bochum.

"It wasn't like this there. There, you would get a catalog delivered to your cell, from which you could choose to order from 30 different books," Oliver said.

Whatever books were available were delivered.

"You didn't go to the books, they came to you in your cell," he said.

The prison library was praised for its comprehensive collection

Librarian Gerhard Peschers and the director of the JVA-Münster prison, Maria Look, did not like the system.

"I think it's important that the prisoners can leave their cells, which are quite small since JVA-Münster is one of the oldest prisons in the country," said Look.

Cells at JVA-Münster were built at about eight square meters (86 sq. feet) in size in 1849 and remain that way even today.

"So when prisoners can walk through the hallways and then enter the friendly atmosphere of the library, it has a positive effect on them," said Look.

The popularity of the library is reflected in the numbers who visit it. Of around 530 prisoners, about 80 percent use the library. But no one can say what kind of prisoner becomes a library user, said librarian Gerhard Peschers.

"I've found that some prisoners have very little experience in reading, but when they are in detention, become great readers," he said.

"The others -- intellectuals -- use the library to expand their knowledge," said Peschers. 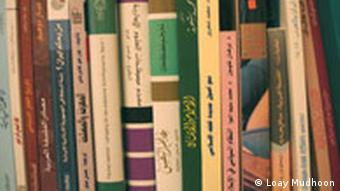 Books in the library are available in 30 languages

One of the inmates, Paul P. never used to be a reader.

"It's a new world for me," he said. "I've been here for a year and half and I was formerly a carpenter and builder. I like being able to use the computer here. I don't really read novels here, but I like browsing through the technical literature."

Prison literature around the world

The library at JVA-Münster is actually not so cutting-edge on an international scale. The Netherlands and Scandinavian countries are the leaders when it comes to making literature available in detention facilities. Nonetheless, Germany has made significant progress in the last few decades.

When libraries were first set up in prisons in the 19th century, generally only texts for religious study were available. Literature wasn't supposed to entertain, but instruct.

Nowadays, nearly everything to be had (or not) in libraries "outside" can be obtained "inside."

"We do not permit books on scientology, and of course we do not want any texts on weapons or other objects which could endanger security," said Peschers.

Pornography and neo-Nazi texts are forbidden.

"But the prisoners love the detective stories in our collection," he said.

The restoration of Germany's Dutchess Anna Amalia Library in Weimar has been completed three years after it was damaged by fire. The library, a UNESCO World Heritage site, reopens to the public on Wednesday, Oct. 24. (19.10.2007)

Do you think libraries in prisons should avoid stocking books on weapons or pornography? Please include your name and country in your reply.