A Chocolate Santa for Every Taste | News and current affairs from Germany and around the world | DW | 24.11.2004

When it comes to edible treats at Christmas, no-one can dispute the claim that the chocolate Santa Claus reigns supreme -- whatever form the festive confectionary may take. 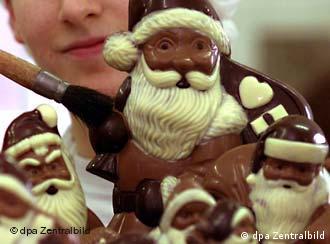 They are one of the most popular edible aspects of German Christmas. They weigh, on average, around 100 grams each but their weight in the festive market is much more than that. In fact, they are in such demand year-in, year-out that an estimated 96.6 million of them are expected to be purchased before 2004’s big day. The invasion of the chocolate Santa Claus has begun. 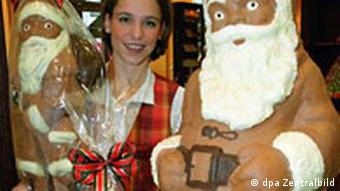 They come in all sizes

With the candy market one of the most fertile during the yuletide spell, the designers of chocolate Santas have let their imaginations run wild in a bid to reach every corner of the sweet-toothed populace.

A temptation for every persuasion

From the enticing and sultry Snow Queen, targeted at the heterosexual male with hungry eyes and stomach to match, to the anatomically blessed Saint Nick for the ladies and the finely toned same-sex Santa for those looking forward to a gay holiday, chocolate manufacturers are catering to everyone. 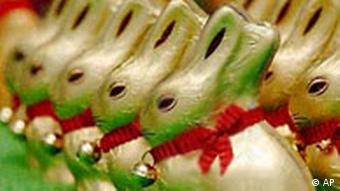 Despite the huge demands, Santa still continues to lose out to his buck-toothed rival, the Easter Bunny, when it comes to the battle of the so-called hollow chocolate figures.

Of all the empty treats sold throughout the year, 56 percent of those are rabbit shaped. According to Torben Erbrath from the German Sweet Industry Association, Santas suffer from the fact that Christmas offers a wider range of treats and presents while the bunny has only chocolate eggs for competition.

No recycling into rabbits 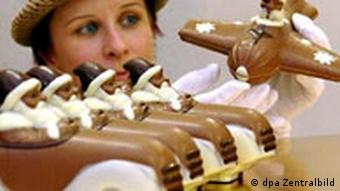 Santa likes to fly as well

Erbrath moved quickly to quell persistent rumors that unsold Santas meet an ironic fate. Many believe that chocolate Santas which are not gobbled up by New Year are remolded into the image of their fluffy-tailed nemesis ready for the shops in April.

Erbrath revealed that manufacturers only make as many as they believe can be sold and that Santas that are still left on the shelf after the festivities are over are then sold off at cut-price and not turned into rabbits. 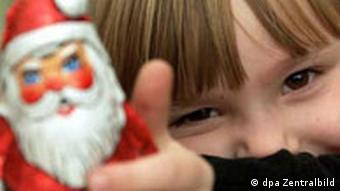 But with such exciting diversity in the range of Santas available, it would be a surprise if any were left come the chiming of midnight on Dec. 31.

Each year, tourists from around the globe flock to Germany's traditional Christmas markets. But a new kind of market lets visitors experience the holiday as it was celebrated hundreds of years ago. (December 1, 2003)

Chocolate Every Day Keeps the Doctor Away

It makes you fat, it's loaded with caffeine, high in cholesterol, and bad for your skin. But chocoholics can take comfort from the good news that their guilty pleasure also has some health benefits. (November 4, 2004)