A black Jesus against exploitation: Milo Rau's 'The New Gospel'

Jesus is a social revolutionary striking against the exploitation of refugees in the film project "The New Gospel," by Swiss director Milo Rau. Here's what the political activist's "Revolt of Dignity" looks like. 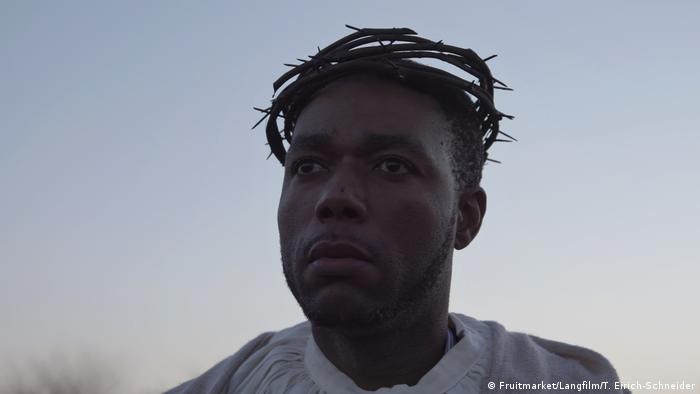 Tourists who come to the southern Italian city of Matera, one of the two 2019 European Capitals of Culture along with Bulgaria's Plovdiv, all head to the Sassi, a UNESCO World Heritage Site renowned for its ancient cave dwellings.

Up until the 1950s, these cave homes were "the shame" of Italy, as people lived there as they did a century before, without electricity or running water.

Now, everything has been modernized, with new restaurants, trendy bars and Airbnb apartments.

Against this backdrop, a black Jesus struggles to drag his cross up the steps of an alley. His shirt is bloodied; he was beaten by soldiers in historical uniforms.

The reenactment of the Passion of Christ is part of a feature film Swiss director Milo Rau is currently shooting in Matera and in other locations in southern Italy. 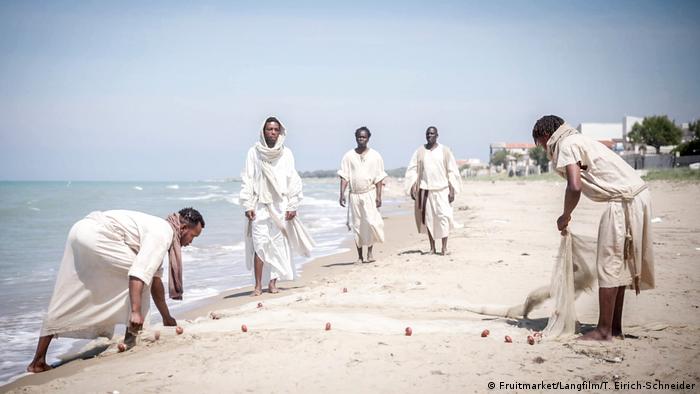 Jesus (political activist Yvan Sagnet) and his disciples on the beach

Not the Savior, a political activist

"I'm not a believer," Milo Rau told DW. His take on the story does not so much address its religious aspects, but rather, focuses on the message of the New Testament. "Jesus was a social revolutionary. He led landless people, refugees, against the Roman Empire. And that's what we're doing here, too," he said.

For the director, it's still very topical: "We're not just shooting a Jesus film. We are gathering refugees from the camps, prostitutes, small farmers who've lost everything because of the multinational agricultural industry."

Rau's Jesus figure is not a savior, but a political activist. In the documentary part of the film, he goes to a refugee camp where he gives rousing speeches, thereby increasing his flock of disciples. They then follow him to a larger public rally in Matera. 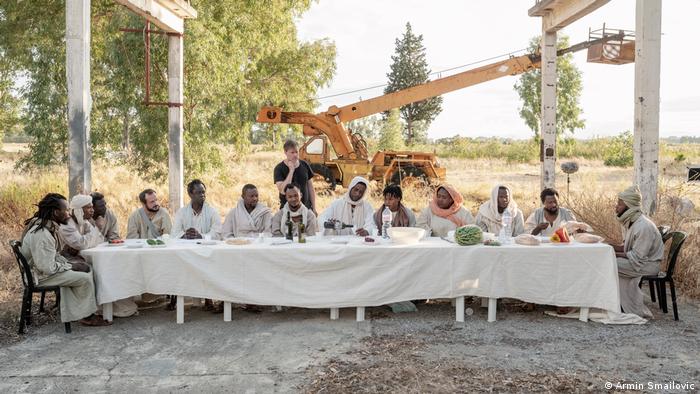 Milo Rau (standing) rehearses with Jesus (Yvan Sagnet, center with bottle) and his Apostles the film scene of the Last Supper

Jesus becomes the instigator of the "Revolt of Dignity," a campaign calling for the right of residence and better working conditions for plantation workers — which is basically what Jesus always did, pointed out Yvan Sagnet, who portrays Jesus in the film.

Sagnet came to Turin 12 years ago to pursue engineering studies. When his scholarship expired, he started working as a tomato picker. He experienced first-hand what it means to work as a completely disenfranchised modern wage slave.

He worked for 14 hours a day for a pittance. Within the system organized by the mafia, middlemen took a part of workers' wages to pay for transport and daily meals. Sometimes Sagnet came back with a pay of only €4, he said.

Yvan Sagnet organized the first strike in agriculture in Italy. That led to increased labor protection laws. But many of the refugees are illegally in the country, and therefore still exposed to the arbitrariness of their employers and the mafia structures in the refugee camps.

Director Milo Rau also faced backlash. A refugee camp was emptied shortly after he visited it to cast his film, and the mafia spread the rumor that it happened because of the film project — even though the eviction had previously been planned. 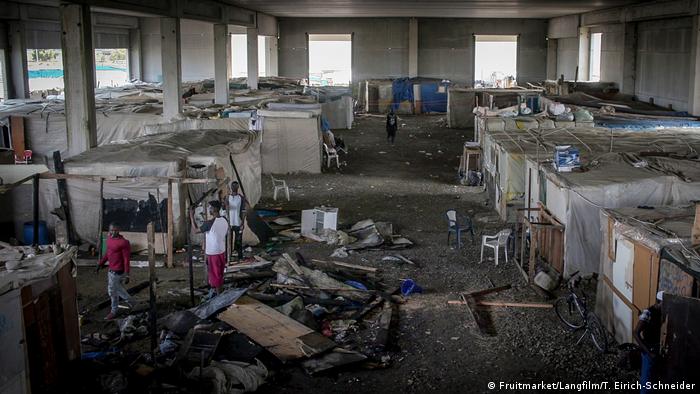 A project to protect refugees

The living conditions in illegal refugee camps are catastrophic. But without these places, the refugees would all be on the streets. "They shouldn't evict the camps without offering an alternative solution to the people, otherwise they don't have anything at all," said Papa Latyr Faye. Herve, as everyone calls him, plays the role of Apostle Peter in Milo Rau's new film.

He comes from Senegal. Together with Mbaye Ndaye, who is also Senegalese and cast in the role of another apostle, he built the Casa Sankara, a self-organized refugee center — the only one in the region. Up to 300 people can live in the settlement's permanent houses. Herve finds proper work for those who have papers, and organizes lawyers for those who don't have a right of residence. The exemplary project appears in the film.

Herve, a Muslim, told DW that he's comfortable portraying a Christian character and that he's learned a lot through the role of Peter, and that it's a good thing to finally have blacks playing the lead roles in this major religious narrative. 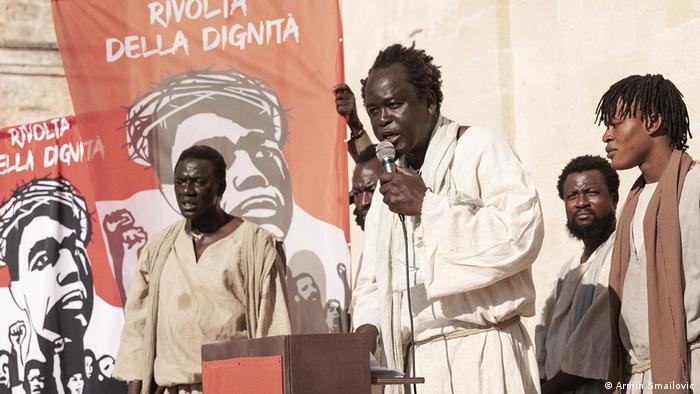 The activists are leading a 'Rivolta della dignita,' or 'Revolt of Dignity'

Milo Rau's cinematic revolt is already having an impact.

The network of supporters and organizations joining the campaign for a fairer world is growing by the hour. Supermarkets are suddenly interested in Yvan Sagnet's fair trade products. Small farmers and Casa Sankara are developing agricultural and sales concepts together. Italian local politicians and even the Catholic Church are aware of the project.

The closing grand public rally, which concluded with a symbolic reenactment of the Descent From the Cross and Resurrection in Rome, attracted Church representatives and other authorities. For political activist Milo Rau, that's a sign that the message of his cinematic Jesus is being heard and is spreading. It's also his interpretation of resurrection, he said.

The industrious artist's networking campaign is also being heard in Africa and even reaching the Landless Workers' Movement in Brazil. 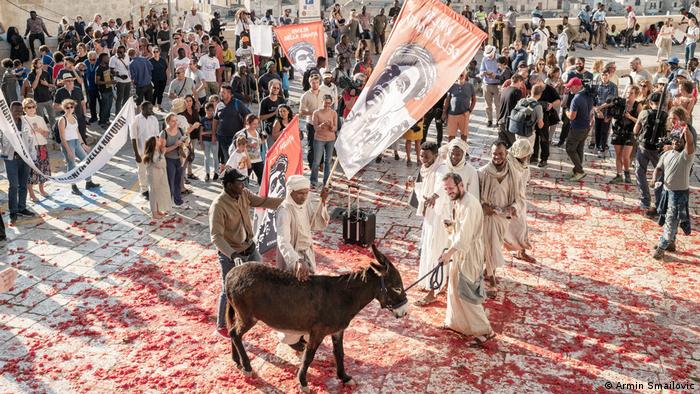 Whether against coltan mines in the Congo, gold refineries in Switzerland or exploitation on tomato plantations in southern Italy, the 42-year-old Swiss director's theater and film projects always deal with economic relations of power and violence.

When Jesus and his disciples trample kilos of tomatoes on a church forecourt in Matera for the film The New Gospel, they symbolically turn against exploitative corporations and retail chains, against those who make profits at the expense of the disenfranchised. So that we, as Central European consumers, can buy cheap produce.

Beyond the prostitute redeemed by Christ: 'Mary Magdalene' and other Bible characters in film

The film is the first to tell the story of Jesus through the eyes of a female protagonist: Mary Magdalene, his companion and disciple. But does it really break with the past and transcend cinematic Bible kitsch? (15.03.2018)

Activists are calling for a radical change to one of Germany's traditional spectacles, which recreates the last five days of Jesus. They want the actor playing Jesus to enter on an e-scooter, not on a donkey. (06.09.2019)

The business world is not impressed with Poland's ruling PiS party's plans to boost social spending. But, whisper it softly, the project's mix of social conservatism and social democratic redistribution could be working. (29.05.2019)