As many as 100 trekkers remain missing in deep snow in central Nepal after Tuesday's rogue storm, according to police. At least 26 people were killed. Victims include Poles, Israelis and Vietnamese. 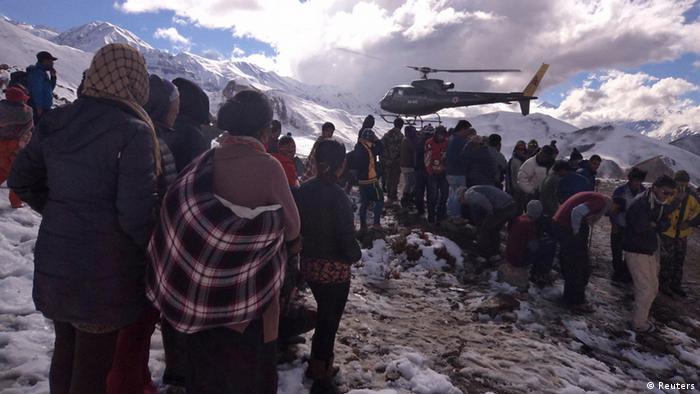 But, more than 100 other trekkers remained out of contact, Rai said. Some 168 foreign tourists had been registered to hike in the popular Annapurna region. Its trekking route rises to elevations of up to about 5,400 meters.

Rai said "several Nepalese" could still be among those missing in the new snowfalls as deep as two meters.

So far, the bodies of four Canadians, two Israelis, one Pole, one Vietnamese, one Indian, one German and 11 Nepalese had been found, he said. The nationalities of three others were unknown.

The Trekking Agencies' Association of Nepal said it had counted at least 85 trekkers who were still unaccounted for.

Association treasurer Gopal Babu Schrestha described Tuesday's weather event as "one of the worst mountaineering accidents I can remember."

Local officials said most bodies were found on the Annapurna circuit, which draws thousands every October, when conditions are usually favorable.

Rescuers on Thursday were also searching higher on Mount Dhaulagiri for two Slovakian mountaineers and three Nepalese guides, missing since an avalanche struck their camp on Tuesday night.

In western Nepal, a search is under way for a 67-year-old Frenchman who fell into a river swollen by downpours also brought by the cyclone.

He was among a 10-member group of tourists heading up a scenic route near Mount Manaslu that was developed as an alternative to the crowded Annapurna circuit.

This week's fatal weather follows the deaths of 16 Nepalese sherpa guides in an avalanche on Mount Everest in April. That disaster prompted an unprecedented shutdown of the world's highest peak.

More than a tenth of the nearly 800,000 tourists who visited Nepal in 2013 went hiking or mountain climbing.

Most Nepalese Sherpa guides on Mount Everest are planning to leave the mountain after a meeting at which they voted to abandon this year’s climbing season after an avalanche killed at least 13 of their comrades. (22.04.2014)