Özdemir: 'Price for deal with Turkey too high'

Co-leader of the German Green Party Cem Özdemir was the guest on this week's edition of "Conflict Zone." He told host Tim Sebastian that he thought Angela Merkel's policy on Turkey was one of her biggest defeats. 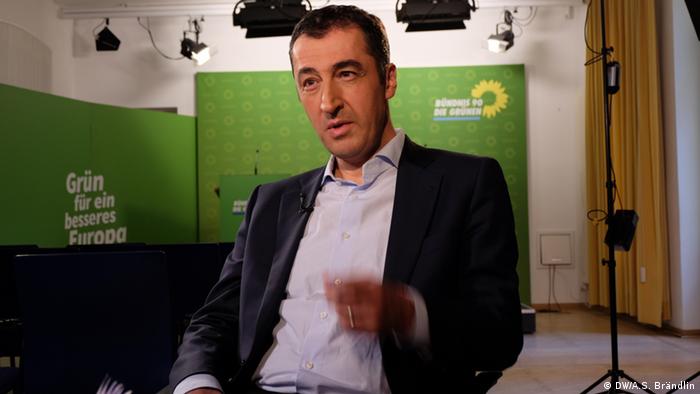 Özdemir defended Merkel's decision to open Germany's borders for Syrian refugees in 2015: "I think there was no other choice at that time, to open the border, to welcome the refugees. But a lot of things would have been a lot easier if the European Union had agreed on a system to distribute the refugees. This is a European challenge and there needs to be a European answer."

The member of the Green party added: "Some countries have been willing to share the refugees, some Eastern European countries obviously refuse. I think at least they have to pay for it, because there cannot be a kind of a job sharing that you take all the benefits from the European Union, but when it comes to responsibilities to refuse that."

"The deal with Turkey I criticized heavily," Özdemir said. "The price is too high if we do not talk about human rights abuses in Turkey."

The politician stated he blamed the government years ago for not helping Italy and Greece when they asked for help. "The German government said: 'This is a national problem and it's not a European problem.' So obviously we were not always the most welcoming country for European solutions," Özdemir said.

Özdemir warned that "as long as we don't talk about root causes and why people leave their countries, nothing will change. We're half a billion people in the EU. If we unite and fight against root causes, if we make something like a Marshall Plan for Northern Africa, we can make a difference."

The politician, who once described himself as a 'secular Muslim', said: "The Islam that I was taught by my parents is an Islam of tolerance. The generation of my parents was successfully integrated and now it's another challenge. At the end of the day this country will manage and become stronger."

"Integrating and assimilating people is more than language and work space," Özdemir said. "There's also a cultural dimension to it. Some people are coming from states were the police is corrupt. Some people are coming from states where there are no equal rights between men and women. To expect those people to immediately adapt to the society is very naïve. We have to train these people, prepare these people."

At a scheduled June 2 debate, the members of the Bundestag, the German parliament, will decide whether to officially recognize the killings of hundreds of thousands of Armenians in 1915 by Ottoman rulers as a genocide. Özdemir: "I made a deal with the Christian Democrats that we put it as a joint motion to the floor, to the Bundestag. On June 2, for the first time in German history, the Bundestag will make a decision that it was a genocide. Germany has a responsibility because we were an ally of the Ottoman Empire."

Cem Özdemir, born in Germany 1965, is chairman of the Bündnis 90/Die Grünen (German Green Party). A trained educator, he was elected to the German parliament in 1994 and was a member of the European Parliament (The Greens/European Free Alliance) from 2004 to 2009. Özdemir's Turkish parents moved to Germany in the early 1960s as so-called guest workers.

British journalist Tim Sebastian, who has been the host of DW's "Conflict Zone" since September 2015, and Michel Friedman take turns in presenting the talk show with German and international decision-makers. "Conflict Zone" airs every Wednesday at 17.30 UTC and is available online on demand.