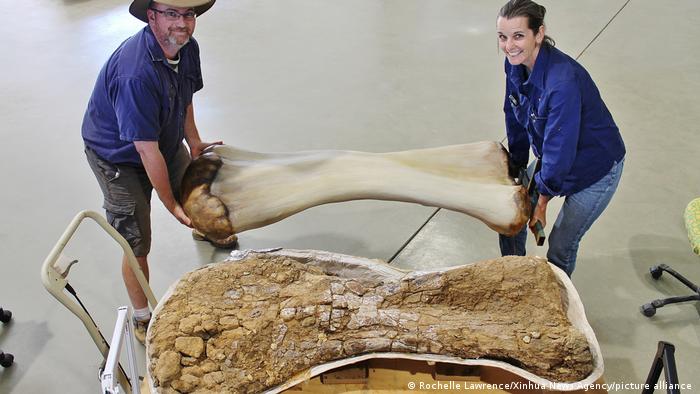 Paleontologists in Australia have confirmed the discovery a new species of sauropod dinosaur, which could be one of the largest to have ever existed.

Confirmation of the Australotitan cooperensis species is a significant step in a 15-year odyssey since the first bones of the species were discovered in 2006 about 1,000 kilometers (620 miles) west of Brisbane on a family farm in the Eromanga Basin.

What do we know about the new species of dinosaur?

The dinosaur is known informally as "Cooper" for the creek near where the bones were discovered. It is believed the animal was 5 to 6.5 meters (16 to 21 feet) tall and 20 to 30 meters (65 to 98 feet) in length. This means the dinosaur species would have been a basketball court long, and two stories tall. 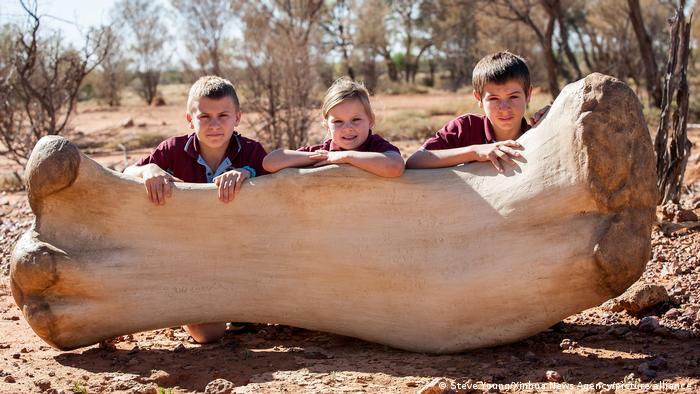 Students pose for photos with a replica of femur from the Australotitan cooperensis in Eromanga, Queensland, Australia

Only in South America have bones belonging to such a large dinosaur previously been found. "Cooper" is among the top five largest types of dinosaurs ever discovered.

"Discoveries like this are just the tip of the iceberg," said Paleontologist Scott Hocknull, a Queensland museum curator and the lead author on a research paper about the dinosaur published this week.

He noted that larger specimens are waiting to be discovered because the plant-eating sauropods were understood to be preyed upon by huge theropods, which were even larger.

It is believed the new Australotitan species lived during the Cretaceous period, from 92 million to 96 million years ago, at a time when the Australian continent was still attached to Antarctica.

How was the discovery made?

Rancher Robyn Mackenzie was herding cattle with her husband on her family's farm 15 years ago when they made the discovery. She has since become a field paleontologist and founded the Eromanga Natural History Museum, which is home to the dinosaur.

Working together with the Queensland Museum, new digital technology enabled a 3D scan of each bone for the first time. The scans made comparing the bones to other species, allowing researchers to pinpoint specific characteristics.

Hocknull said it had been "very long and painstaking task" to confirm that A. cooperensis was a new species.

Mackenzie hopes the discovery will draw tourists to her native region. The bones first went on display in 2007.