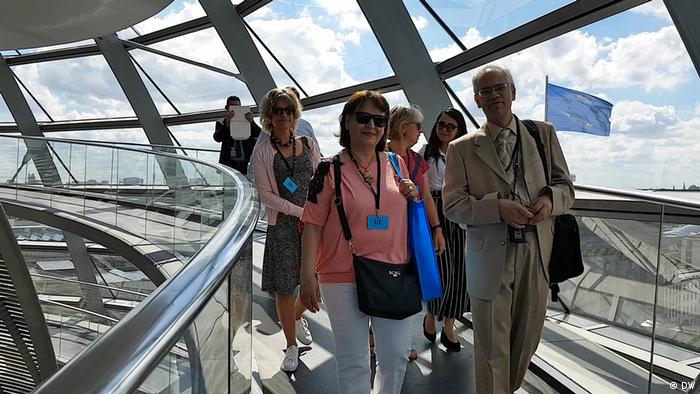 Communication experts in Berlin get a look behind the scenes

Tunisian government press officers were in Berlin to discuss experiences with their German counterparts. The Tunisian guests said that their parliament was active on social media and wanted to know whether this applied to the German Bundestag as well. They were also curious to know why WhatsApp was so appealing for political communication. Both sides spent an afternoon responding to each other's questions.

During their five-day visit, the press officers also met with the Tunisian ambassador to Germany and attended the German Federal Press Conference.

Twelve Tunisian press officers visited Germany to explore how the Interior Ministry communicates, how the Federal Foreign Office approaches crises, and the unique role of the Federal Press Conference. (14.10.2015)

DW Akademie's activities in Tunisia focus on the country's rural population, with the aim of increasing their access to information and providing a public forum for a debate on their needs and problems. (12.06.2018)

Music and journalism: The Deutsche Kammerphilharmonie Bremen 'harmonizes' in Tunisia

In a project by the Deutsche Kammerphilharmonie Bremen Tunisian students rehearsed with professional musicians. DW Akademie joined with a mobile reporting workshop. (22.06.2018)