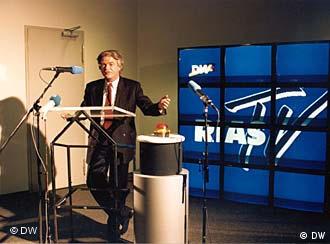 The author and journalist, Vladimir Ostrogorski, long-time chief commentator and director of the German Service at Radio Moscow publishes his story "German Lessons - Views and Insights" as part of a DW documentary series. At the time he is working as a free-lance journalist in Berlin for DW. His report is a first-rate "turning point" story. Just a few years earlier, in 1985, Ostrogorski had published a book entitled "Caution: Deutsche Welle - Origins and History of the West German Foreign Broadcasting Service". The book caused an uproar, but was considered the most comprehensive study of the Deutsche Welle from the Soviet point of view.

The "Law for Establishing Broadcast Institutions under Federal Law" of November, 29, 1960, is amended. The Broadcasting Board is enlarged to 17 members instead of the previous 11 and specifically includes more representatives from relevant social groups and organizations.

In the wake of this broadcast reorganization DW absorbs some of the staff members, frequencies and transmission equipment of Radio Berlin 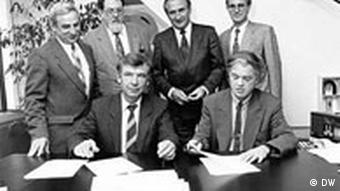 DW takes over the former Soviet radio jamming posts near the cities of Kuibychev, Novosibirsk and Irkutsk. They are re-fitted to serve as transponders for strengthening radio signals to Asia. A cooperation agreement was signed with Radio Moscow in August of 1990.

At the Frankfurt Book Fair, the DW Literature Prize is awarded to Eva Lisina and Olga Kovbasyuk. The competition this time had been aimed at Russian writers and had been announced in August, 1990.

DW-TV is launched on April 1st in Berlin. DW's worldwide television program is transmitted by satellite. In the beginning, three two-hour blocks are broadcast in German and English. From November, the daily broadcast time of DW-TV is extended to 14 hours. From July 1, 1993, it is expanded to 16 hours. Spanish is added as a third language. DW-TV was the result of a prior agreement to take over RIAS-TV in Berlin.

The Serbo-Croatian Service at DW-RADIO is split up because of the Balkan conflict. As a consequence, two separate programs are formed, each with 50 minutes of broadcast time.

The Albanian Service begins its operations at DW-RADIO.

The winners of the 4th DW Literature Prize are honored at the Frankfurt Book Fair. This time authors from the Arab world were asked to contribute. The awards went to the Syrian journalist Riad Ismat and the Egyptian writer Salwa Bakr.

Civil war is raging in Rwanda. DW employees at the relay station in Kigali are trapped in their building. In April, 11 German staff members are rescued by a special unit of the Belgian armed forces. The fate of local Rwandan employees is unknown. It must be assumed that many of them were killed. In Cologne, those rescued face the press along with director-general Weirich (Photo).

DW launches its Internet web site under www.dwelle.de, making it the first public broadcaster in Germany to have a presence on the World Wide Web.