A petition to restrict access to firearms in Germany comes after a shooting spree in Winnenden in 2009. Many readers are convinced that stringent gun controls lead to more crime. 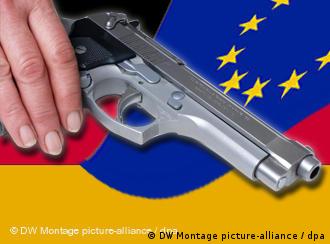 In the aftermath of a couple of instances of shooting sprees in Germany with multiple deaths, the question being asked is whether guns should be allowed in private homes. The idea of preventing such tragedies by banning guns is understandable, but it's neither wise nor effective, because people really intent on committing murder will find the means, legal or illegal, to do so. On the other hand, by banning guns from the hundreds of thousands of decent and responsible German gun-owners, the government makes it easier for the criminals to ply their trade, because the criminals will not comply with any laws you pass while the law-abiding would be disarmed. This is the limitation of laws – only the law-abiding comply. Also, while no one trivializes the deaths of those people being commemorated, the fact is that such tragedies in Germany are rare and infrequent aberrations. Laws passed due to rare aberrations are seldom good for the multitude of decent folks. Plus, no rational and objective laws can be passed with all this emotional and shrill propaganda (e.g., "Mordwaffen.") I think that 99.9999 percent of guns in Germany haven't killed anyone today. And so this anti-gun political activity is not sensible endeavor – it is mass-hysteria leveraged for political gain. -- James, US

You'd be hard pressed to find anyone in the UK who would agree that the handgun ban was a good piece of public policy since the shootings in Cumbria a few weeks ago. Clearly it didn't work and the gunman used a double-barrel shotgun and a .22 rifle, which this group hasn't said a word about, they're not even calling for a ban on .22 pistols. It would be utterly pointless to pass a selective gun ban in Germany now, demonstrably it would achieve nothing. -- Steve, Great Britain

It is time that anti-gun groups stop spreading lies with the help of the media to push for their utopian world. Praising the UK for its gun laws is insane. The UK has seen its murder rate and overall criminality increasing after it passed stringent laws. Those stringent laws were not able to prevent the massacre in Cumbria by a cab driver a few weeks ago. The more stringent the gun laws, the more murders and more mass murders you have. The media always portrays the US as a violent country but since 1986 when Florida allowed its citizens to carry firearms, the murder rate and crime rate overall is at its lowest. Only in states and cities like Chicago, where tough gun laws are applied, are very high murder and crime rates. If you look at recent history where the worst school shooting have occurred? Out of the five most deadly shootings, four happened in Europe, three of which were in Germany which is one of the European countries with the most stringent gun laws. And every time there is a shooting it happens where citizens are not allowed to be armed. -- Vittorio, Belgium

Every person should be allowed to have firearms in the home! Countries that eliminated private ownership still have mass shootings. -- Stu, US

I live in the state of Florida. We are one of the states in our union that has concealed carry. In a word, it works. Our violent crime rate has declined dramatically since this was enacted in 1987. I'm not suggesting that Germany enact our kind of law, but for the most part, private possession of firearms and proper training works. You will always have people that will misuse all kinds of implements to kill and injure people. This is a sad fact of human nature. But to blame an inanimate object for its misuse is patently ludicrous. Most of the thinking people in my country have found that firearm ownership tends to keep criminals and other miscreants in awe. They don't like the thought of getting injured while on the job. You see, criminals are by their very nature stupid and lazy. The second amendment to our constitution re-affirms our inherent God-given right to self protection and our Supreme Court will soon totally decide the case for all of our citizens. Our country isn't perfect, but your country and your government should consider how we have handled our problem. -- Steven, US

A smart man learns from his mistakes but a wise man learns from other peoples mistakes. See the results of crime in the UK and Australia before voting on what works and what doesn't. -- James, US

Your report has a section titled "British comparison" about the total ban on private ownership of handguns in Great Britain, yet you fail to report that firearms violence there has risen since the ban, and murder rates have increased more rapidly there than in any western nation. This is either sloppy reporting or deliberately misleading. Germany, like many western countries, is suffering as the younger generations are more disconnected from what were traditional values and become focused on themselves instead of society and family; the trend towards individualism above everything has led young people to disregard social norms. -- Phillip, US

Law-abiding people of good character should be allowed to own firearms. Statistics show that mass murder occurs more frequently in countries where private citizens have restrictive access to firearms. Individuals prohibited from owning firearms are unable to protect themselves, their families and their property and are easy targets of criminals. I would certainly think that Germany should have learned from history that restrictive access or confiscation of firearms by tyrannical governments could have devastating consequences. -- John, US

I say yes. I am from Ireland living in the USA. People need to be able to protect themselves but also secure their firearms. -- Marcie, US

The funny thing with all these gun bans is that bad guys don't follow the law as it is. That's why they're bad guys. I followed all the laws when I was in Germany with my weapons. I follow all laws in the USA with my guns. I would never hurt anyone, and judging by my luck as ein Jaeger (a hunter), I don't seem to hurt any game or fowl either. Criminal gangs don't even use civilian guns; they have military style weapons. They rarely ever use guns that the public can go and purchase. -- Aaron, US

As an American and a firm believer in the US Constitution and the Bill of Rights, I believe that guns "should be allowed" in private homes. First of all, it's not a matter of "allowed," the Second Amendment protects the citizens' God-given right to self-defense ... against criminal aggressors and/or a tyrannical government. Second, private homes are just that ... private. This is a question that, in a sane society, should not even be asked. -- Peter, US

Yes, you should be able to have guns and ammo in your home. And not only in your home, but also on your person. It is your right to protect yourself from criminals who obviously don't respect or obey any laws and are going to have their guns. What gives anyone the right to take my life or someone in my family's life because I can't arm myself by law but he can illegally? Firearm laws only affect law abiding citizens not criminals. Laws are not broken by law abiding citizens they are broken by criminals! Stiffer sentences and penalties to criminals and those who arm them is the answer. -- Will, US

An anti-weapons action group protested to the German parliament Friday, a year after Germany's gun laws were strengthened in response to a high-school massacre. The group insists that the changes are too weak. (18.06.2010)