Russia and Iran rebuke US for missile threat against Syria amid standoff over attack | News | DW | 11.04.2018

A spokesman for Russian President Vladimir Putin has dismissed Donald Trump's "Twitter diplomacy." The White House insists that "all options are on the table" when it comes to Syria. 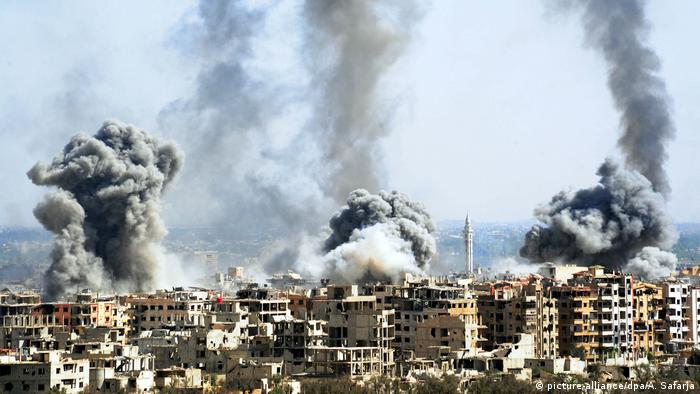 Russia and Iran hit back against Donald Trump on Wednesday, after the president said the US would launch missile strikes against the Syrian government in response to a suspected chemical weapons attack.

"We do not take part in Twitter diplomacy," Russian presidential spokesman Dmitry Peskov said. "We support serious approaches. ... We believe it is important not to take steps that could damage an already fragile situation."

In a Twitter post, Trump had written: "Russia vows to shoot down any and all missiles fired at Syria. Get ready Russia, because they will be coming, nice and new and 'smart!' You shouldn't be partners with a Gas Killing Animal who kills his people and enjoys it!"

White House spokeswoman Sarah Huckabee Sanders said the US held Russia and Syria responsible for the attack. But she added that military action had not been decided upon, with "all options on the table."

Read more: 'America will not engage in a huge military entanglement'

Trump later attempted to backtrack, tweeting that he "never said when an attack on Syria would take place."

Russia's Defense Ministry criticized Trump for the threat: "Instead of talking about the [US-led] coalition's readiness to fire missiles at Syria, the United States would do better to rebuild the destroyed [Syrian] city [of Raqqa] and provide wide-ranging help to its suffering population."

The ministry added that it was closely watching a US naval strike force currently on its way to the sea off Syria's western coastline.

German Chancellor Angela Merkel stopped short of pointing any blame at Russia directly and refused to be drawn into a potential military strike on Syrian government troops, saying: "I do not want to speculate."

"We will stand by Syria's government against any foreign aggression" Velayati said. "Iran backs Syria in its fight against America and the Zionist Regime," he added, referring to Israel.

The prime minister of Turkey, which has occupied parts of northern Syria and is a US NATO ally, called for calm in response to Trump's Twitter post.

"They are fighting like street bullies. ... The time is not one for competing," Binali Yildirim said. "It is time to heal the wounds of the region," he added. 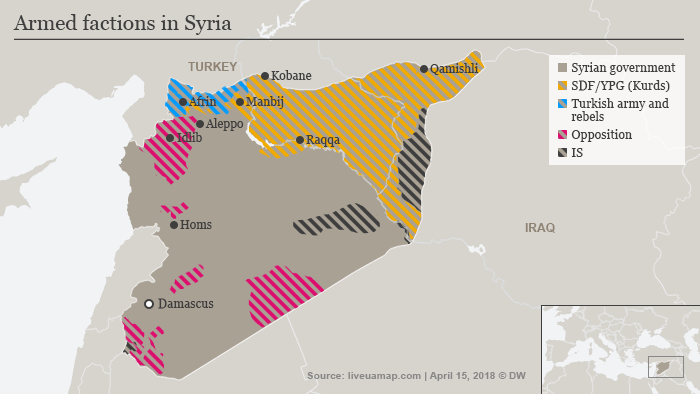 The US has been consulting with France and Britain on a military response to Saturday's attack.

On Wednesday, British Prime Minister Theresa May said "all the indications" pointed to the Syrian government's responsibility for the attack in Douma, which killed more than 40 people. The "continued use of chemical weapons cannot go unchallenged," she added.

Defense Secretary James Mattis said Washington was "still assessing the intelligence" on the attack, but added that the US stood "ready to provide military options" if needed.

UN Secretary-General Antonio Guterres emphasized the need to prevent the situation in Syria from "spiraling out of control."

Russia and Syria have denied that any chemical attack took place. Moscow has invited investigators from the Organization for the Prohibition of Chemical Weapons (OPCW) to investigate the scene.

Assad's government has also accused the US of using the attack as a pretext for another military strike. The US launched a missile strike against a Syrian air base in April 2017 after a previous chemical weapons attack.

The OPCW is set to hold an emergency meeting on Monday to discuss the incident.

Europe's air traffic control agency, Eurocontrol, has warned airlines of the heightened risk to aircraft in the eastern Mediterranean, with airstrikes possible in the next three days.