More than 600 attacks on refugee shelters, the booming AfD and PEGIDA, and hate speech on the Internet show that Germany is not only a welcoming nation: a new xenophobic sentiment is also on the rise. 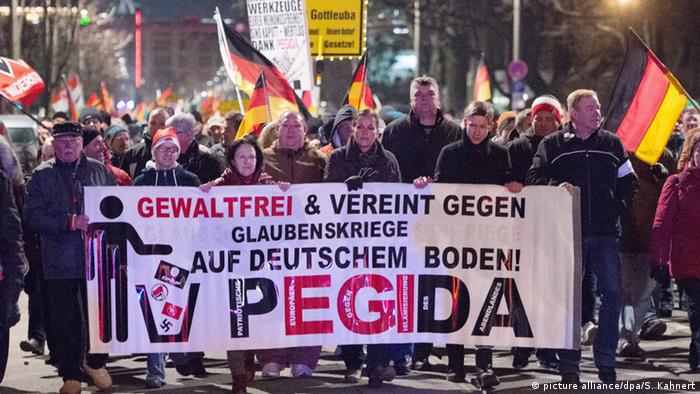 On August 28, a three-story building was set on fire in a small town near the western German city of Hamelin. A family from Zimbabwe had just moved there. Firefighters soon found the cause of the blaze under the eleven-year-old son Alvin's bed: a Molotov cocktail. It had been tossed into the ground floor of the building. Hundreds of cases of such homicidal violence have occurred in Germany this year. To give a comparison: in 2011, 18 attacks on refugee accommodation were recorded and now, four years later, the number has gone up to more than 600.

But Germany also showed its positive side in 2015. Thousands of volunteers, from school-age children to pensioners, took care of Syrians, Afghans and Iraqis arriving in Germany. Children were given teddy bears and chocolates, and parents got help with bureaucracy. Active support was dubbed a "culture of welcome." Outside of Germany, people were astonished at the "crazy Germans," and even the Germans themselves were a little moved by their own big-heartedness. Germany and the refugees was the predominant topic of the year. Even the practically unassailable Chancellor Angela Merkel seems to be foundering a bit after opening borders to those seeking protection.

The ethical idea of helping is now no longer the main force shaping public opinion on refugee policy. On December 8, refugee number 1,000,000 was registered. But Merkel's open-door policy actually met with resistance long before that: in her party, in her own cabinet, in German municipalities and on the street. German society has shown its deep division. 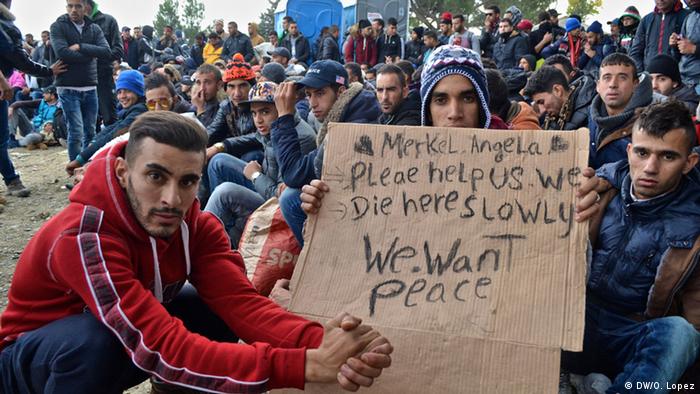 Heading north: still in Greece, but the final destination is called Germany

Germany's ethical stance on asylum, which originated in the historical lessons learned from the Nazi dictatorship and World War II, is now encountering the open disapproval of people who feel that the state and society are overwhelmed by the influx of people. Public opinion researchers have confirmed that xenophobia is on the rise. Criticism of Germany's refugee and asylum policies has turned into fear of people from foreign countries: it is the most obvious phenomenon related to right-wing extremist ideas. The refugee and asylum policy of the German government has become the main focus for people afflicted by the new phobia about foreigners, which is channeled above all by the racist movement Patriotic Europeans Against the Islamization of the West (PEGIDA), the populist party Alternative for Germany (AfD) and the right-wing extremist National Democratic Party (NDP).

PEGIDA, a phenomenon from Saxony

A noteworthy characteristic of these groups is that their members view themselves as victims and seek "protection" from foreigners - this is especially true of PEGIDA supporters. David Begrich, a theologian and sociologist from Magdeburg, emphasizes that it is a regional problem that is mainly limited to the eastern German state of Saxony, though all of eastern Germany is prone to such thinking. He asserts that political concepts based on promises of a return to a homogenous society are particularly popular in the region.

On Facebook, the anti-immigration organization receives almost twice as many "likes" as all the parties represented in German parliament combined. Its supporters are mainly middle-aged men who, as a rule, have steady jobs. In their Monday demonstration marches, they regularly refer to the "power of the people" and the Christian culture of the Western world, even though eastern Germany is one of the least religious places in Europe, according to David Begrich.

Representative democracy as a bogeyman

Interestingly enough, findings also show that PEGIDA sympathizers are well-educated. Many of them have gone to university. They feel that democracy is a good thing in principle, says Lars Geiges from the Institute for Democracy Studies at the German University of Göttingen. But they feel that representative democracy is flawed. They suspect political parties, politicians, businesses and media of being one big clique. They demand more direct democracy and regular plebiscites, like in Switzerland. 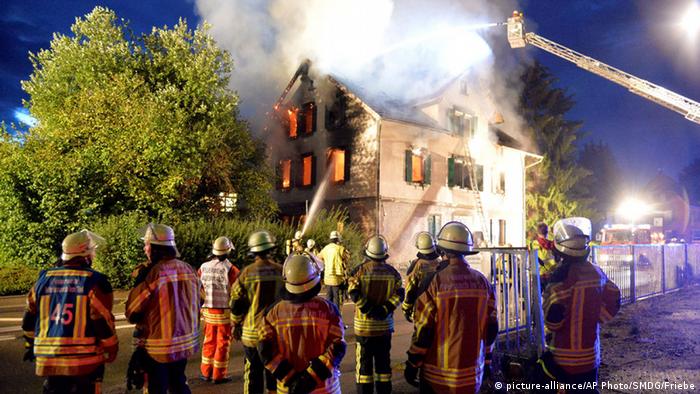 Attacks on refugee shelters are increasing all over Germany

The new thing is that they are now expressing their resentment out loud. The cause for their insecurity goes back further in the past: the social shortcomings of neoliberalism. From 2003 onward, Social Democrat Chancellor Gerhard Schröder's administration initiated a series of drastic cuts in the welfare state, which meant the loss of accustomed social services. Millions of people now receive less financial support while unemployed or end up working at poorly-paid jobs. The potential for protest clearly comes from lesser paid or badly paid workers in the service sector. The package deliverer with a university degree has long been considered the prototype of a socially frustrated citizen. Such people use hostility against refugees as a way of venting their deep grievances.

The AfD, a forum for 'outraged citizens'

Originally founded as a eurosceptic movement a few years ago, the party Alternative for Germany (AfD) came close to its demise - until it split in two. Now, it has experienced a surge in public opinion. Euroscepticism is barely mentioned any more; the new party is acting as an anti-refugee party. If elections were to take place today, the AfD would probably enter parliament with a double-digit election result. This would mean that a party representing ethnic-nationalist extremism would enter the Bundestag, says the renowned researcher on right-wing extremism, Hajo Funke, a political scientist at Berlin's Freie Universität. The AfD is clearly in the process of right-wing radicalization, Funke says. 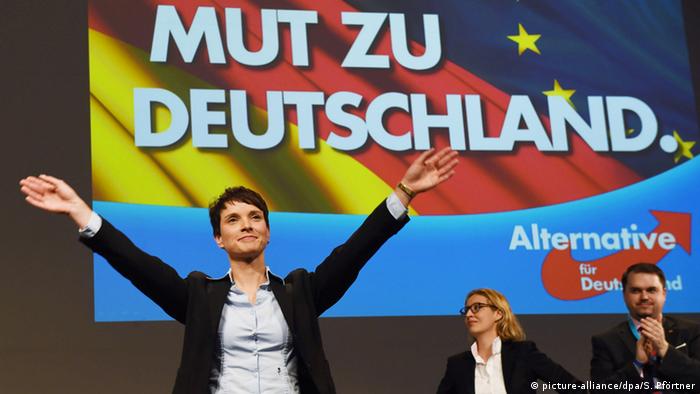 "Courageously standing up for Germany": the AfD under Frauke Petry is enjoying rising support

The AfD sees itself as a natural partner of the Saxony-based PEGIDA. According to the German news magazine "Der Spiegel," the million refugees in the country seemed to serve as a "catalyst for the new right-wing movement." It mostly takes in conservative citizens who have become politically homeless in recent years. The increasingly centrist course taken by Angela Merkel's Christian Democrats in particular has meant it has lost support on the right-wing edge of mainstream politics.

The NPD, an exceptional case

When it comes to xenophobic agitation, you can always find the NPD in the midst of it. The National Democratic Party of Germany was recently in steady decline, but the refugee issue has now slightly reversed its fortunes. Without the AfD and PEGIDA, the party could probably capitalize on dissatisfaction with the German government's refugee policies even more, according to security sources. The party currently plays no role in parliament, but come spring, when the Constitutional Court reviews a petition to ban the party, it could draw media attention again - just when the number of refugees is expected to increase once more.

According to statistics, fewer than 25,000 people in Germany belong to the right-wing extremist end of the political spectrum, and just 2,500 of them belong to organizations. There is obviously no nationwide master plan behind the regular attacks on refugee shelters, because more than two-thirds of all perpetrators turn out to be locals - mostly relatively young men with no police record. This indicates that a part of the previously silent mainstream has been radicalized. Analysts are already speaking of the "uninhibited republic."

This loss of inhibitions also means that more people are taking part in counter-demonstrations as a response to xenophobic marches. Hajo Funke, the expert on right-wing extremism, is convinced that the xenophobic potential in Germany will diminish if politicians succeed in clearly structuring asylum policies and accommodating refugees. Angela Merkel says it can be done.

But all the same, 2015 clearly proves one thing: although right-wing extremists do not represent "the people" as they claim, they do constitute a part. And that part is growing.