Why are condoms unpopular in India?

Condoms are among the least popular contraceptive methods in India. The government has now introduced an unprecedented online condom distribution service to improve their utility. Murali Krishnan reports from New Delhi. 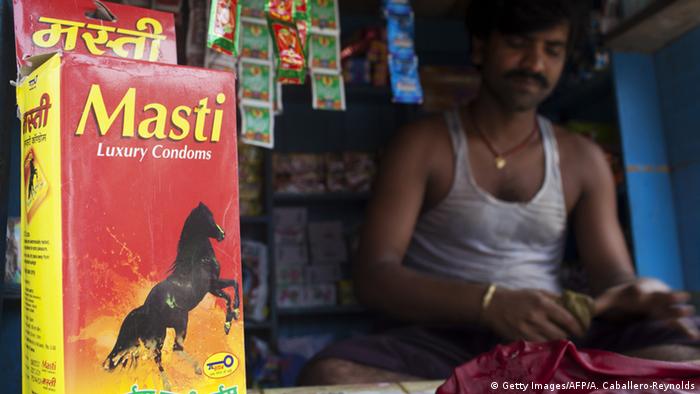 In most parts of India, the awareness about birth control is not very high. The use of contraceptives has declined across the South Asian country despite several government-run campaigns and programs. It is a worrying situation for the government as the country's 1.32 billion-strong population is projected to surpass China's 1.37 billion in the next six years and could reach 1.7 billion by 2050.

While European countries have an overall 30 percent condom usage, India has less than six percent, even when it ranks third in the number of HIV cases worldwide.

Government statistics show the use of condoms has declined 52 percent in the past eight years, whereas vasectomies have also fallen 73 percent in the same period. The use of oral birth-control pills has also decreased in this period, according to IndiaSpend, the country's first data journalism initiative.

"It is certainly a worrying trend. Public awareness campaigns should be ramped up not only for safe-sex practices but also for the sake of family planning," Srinath Reddy, president of the Public Health Foundation of India, told DW.

Experts cite social stigma and a lack of privacy at condom-selling stores as reasons for a decline in the contraceptive use. Also, in rural areas, sexual health and issues related to intercourse are not discussed openly and pre-marital sex is frowned upon by elders despite young people engaging in it frequently.

A research carried out by the Indian Journal of Medical Research said many Indian men experienced sexual dissatisfaction while using condoms during intercourse. Alcoholism, depression and anxiety among men are other reasons cited for the aversion.

The government recently launched an online service to distribute condoms. The initiative has elicited a good response, with nearly one million condoms ordered so far. Experts say the high number of people ordering condoms online is proof that most Indians feel embarrassed to buy contraceptives from a store.

Preeti Kumar, a doctor who has been involved in HIV/AIDS national programs, concurs.

"To increase the acceptability of condom – for both men and women – there is a need to create a positive image for their use. It will definitely prevent unwanted pregnancies and sexually transmitted diseases," Kumar noted.

According to the latest National Family Health Survey, the use of modern family planning methods among women has seen a six percent decline in the past few years despite a greater awareness for birth-control methods and improved family planning services.

On the other hand, female sterilization is the preferred family planning method among Indian couples. The survey says that couples are not motivated to use condoms if either husband or wife has been sterilized.

"What we are seeing is the inability of the health ministry to communicate with its target audience. It has to make new strategies to convince people of the effectiveness and benefits of condoms," Probal Dasgupta, a social scientist, told DW.