Republican presidential hopeful Trump has used the Florida debate to stand by his recent claim that "Islam hates us." However, the atmosphere of the debate was more civil than the previous ones. 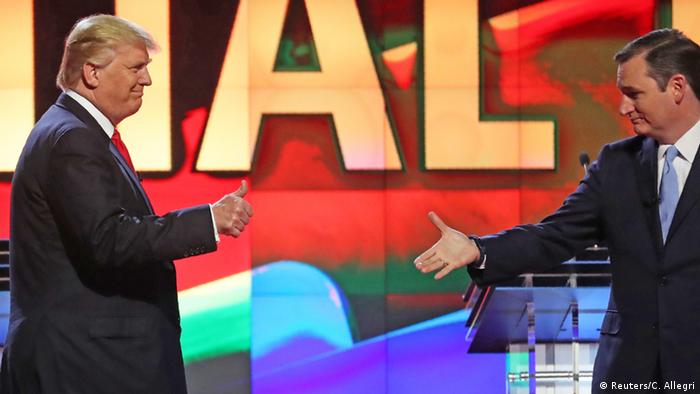 In a televised debate in Miami on Thursday, US Republican presidential front-runner Donald Trump defended his earlier statement that Islam hates the US.

"I will stick with exactly what I said," he added, referring to his comments during an interview with the CNN on the debate eve.

"We have a serious problem of hate. There is tremendous hate," argued Trump, who had previously proposed a temporary ban on Muslims entering the United States.

"We are going to have to work with people in the Muslim faith even as Islam faces a serious crisis within it," Rubio said. "Presidents can't just say whatever they want. It has consequences," he said, referring to Trump's usual unorthodox and outrageous statements.

Five US states go to the polls on Tuesday to vote for their preferred presidential candidate in both the Republican and the Democratic parties. Ohio Governor John Kasich and the Florida senator Rubio are under immense pressure to win their home states.

US presidential hopefuls Ted Cruz and Bernie Sanders make gains in the latest round of contests. Cruz is chipping away at Republican rival Donald Trump's lead. (06.03.2016)

US primaries: gains for Trump, Clinton and Sanders

Despite the controversy over Trump's Islam comments, the CNN-hosted debate, which was the twelfth of the campaign, largely focused on key issues facing the US. The Republican candidates discussed a range of topics in an unusually congenial tone, including trade, foreign policy, immigration, climate change, and the threat of terrorism.

"We're all in this together. We are going to come up with solutions. We're going to find the answers to things," said Trump

"And so far I cannot believe how civil it's been here," marveled Trump, who tried to appear more presidential-looking in the Miami debate.

The billionaire front-runner has already won 15 of 24 states, including victories in Michigan, Mississippi and Hawaii on Tuesday.

Ted Cruz, a senator from Texas, is running second to Trump. Rubio and Kasich will likely quit the race if they fail to win in their home states on Tuesday.