Amid tight security, hundreds of thousands of mourners gathered in Seoul to pay their last respects to former President Roh Moo-hyun. Thousands of troops were deployed to maintain order. The 62-year-old Roh, who was the president from 2003-2008 killed himself by jumping off a cliff near his home six days ago. His death comes amid a probe over allegations that he and his family took bribes during his term. 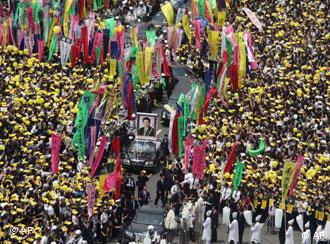 Ever since the news of Roh’s death, South Koreans have been in deep shock and grief. Emotions also ran high on Friday when the funeral procession from Roh’s village of Bongha near the south-eastern coast reached Seoul.

Tens of thousands of tearful supporters had queued up to bid farewell to their former president, waving banners with words of condolences.

Werner Kamppeter from the Friedrich Ebert foundation in Seoul described the scene: “It appears he is now more popular than he was during his government. Hundreds of thousands gathered in Seoul alone and many more saw it on large screens set up in the city centre.”

To the surprise of many, the self-taught lawyer had won the presidential elections in 2003.

“He himself admitted his election victory was unexpected, “explained Oh Young Jin, the editor of the Korea Times, “He was an underdog. Personally, I would remember him as the people’s president. He wanted to bring the presidency to the level of ordinary people. Some of his predecessors were high handed towards people’s issues during their terms. Roh Moo Hyun was different.”

Roh’s attempts to turn South Korea, which was under military-backed rule until 1987, into a more democratic country, earned him widespread respect among ordinary people, said Werner Kamppeter.

“He was truly a democrat. He even tried to weaken the power of the presidential office, because he said too much power at the centre of the country was not good. You need consensus for political decisions, so he left a lot of levy for debate and he was respected for that.”

An ardent supporter of the so-called "sunshine policy" of engaging North Korea in dialogue, Roh made international headlines in 2007 when he visited the neighbouring state for a historic summit with North Korean leader Kim Jong Il. It was the second meeting only between the two Korean leaders in nearly five decades.

Roh had also promised to clean up South Korea’s endemic corruption during his time in office. Never would anyone have imagined that he himself would become entangled in a corruption scandal.

But on April 30th of this year, the former president was questioned by state prosecutors over his alleged involvement in a bribery case. He and his family were accused of taking nearly six million dollars in bribes from a wealthy shoe manufacturer during his term in office. The inquiry led to a severe blow to his reputation. Roh denied any personal involvement in the matter but publicly apologised for his family's involvement in the scandal.

“I know it from people close to him, he did not know that his wife had received money in two occasions. When she told him, he actually collapsed, fell over out of anger. He couldn’t control his relatives. This tarnished his image,” says Werner Kamppeter from the Friedrich Ebert foundation.

In a brief suicide letter for his family, he apparently spoke of going through a tough time and said he felt under huge pressure because of the case.

It might take Roh’s supporters some time to come to terms with his death. They accuse the government of conducting a politically-motivated inquiry. There was visible anger when current President Lee Myung Bak bowed at Roh’s portrait on Friday and was booed and called a political murderer. Roh’s Democratic Party has called for an official government apology.

The government has insisted the investigation into Roh and his family was independent.