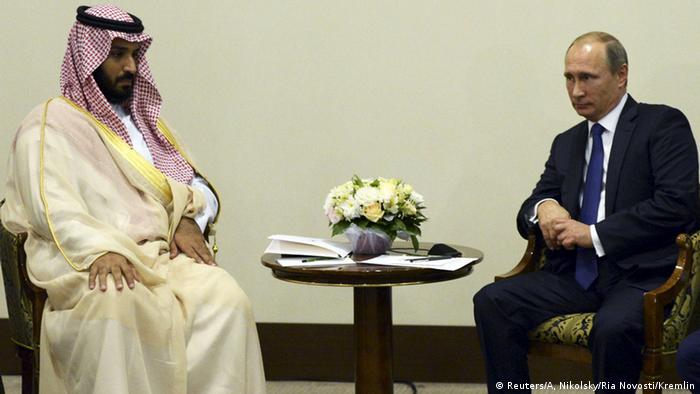 Putin and Salman met in the southern Russian city of Sochi on Sunday where they were also joined by Russian Foreign Minister Sergei Lavrov and Energy Minister Alexander Novak. The Russian Formula One Grand Prix was held in Sochi on Sunday.

Lavrov told journalists that following the talks, Russia and Saudi Arabia "better understand how to move toward a political solution."

"We have closely cooperated with Saudi Arabia for years on the crisis in Syria," Lavrov said.

"The two parties confirmed that Saudi Arabia and Russia have similar objectives when it comes to Syria. Above all, it is to not let a terrorist caliphate take over the country," Lavrov added.

The Russian foreign minister also said that Moscow was ready for closer cooperation with Riyadh to make clear that the country was in fact targeting the "Islamic State" (IS), al-Nusra and other terrorist strongholds in Syria.

Salman said that Russia's military intervention in Syria had raised concerns in Riyadh that Moscow could form an alliance with Iran.

He added that Saudi Arabia was only in favor of a political solution, which would see the departure of Syrian President Bashar al Assad, a loyal ally of Moscow.

Syrian government forces have been supported by the Russian air force since they began an aerial offensive on September 30.

The Russian Defense Ministry said on Sunday that Russian warplanes had destroyed 53 "IS" positions during a total of 63 air strikes in Hama, Latakia, Idlib and Raqqa provinces.

The Russian air campaign has complicated matters for the US-led coalition, however, which has already been launching attacks on "IS" in Syria.

Moscow has also come under criticism from several Western countries for allegedly directing its aerial campaign against all rebels opposed to Assad, and not just against "IS" as it said it intended to do.

Putin said on Sunday, however, that the objective of Russia's operation was to "stabilize the legitimate authorities and create conditions for finding a political compromise."

President Putin turned 63 this week, but, as he savored his birthday cake, did the thought occur to him that he might have bitten off more than he could chew with his Syria strategy? Fiona Clark in Moscow investigates. (11.10.2015)