Poor preparedness caused flood disaster in India | Asia | An in-depth look at news from across the continent | DW | 01.09.2017

Months of flooding in six Indian states have caused huge economic losses and heaped misery on the millions of people. Now, the country's preparedness for natural disasters is being questioned. Murali Krishnan reports. 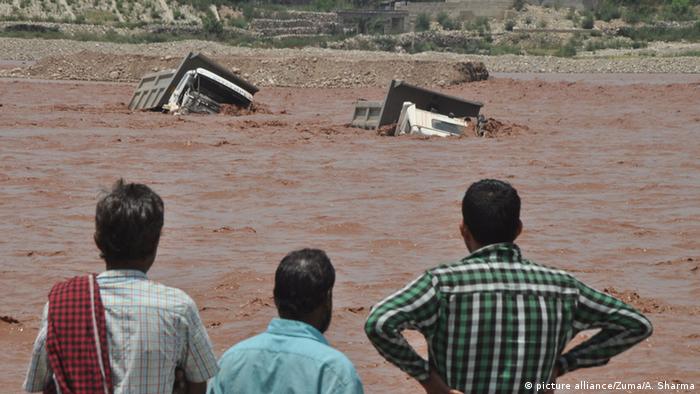 For three consecutive years, Manji Paswan, 52, a daily-wage laborer, has had to reconstruct his two-room mud dwelling in Taralahi village, located in India's northern state of Bihar, after flood waters recede. And every year when the swollen Bagmati River submerges entire villages causing massive destruction by way of human lives, livestock and crops, Paswan wonders when the despair will end.

"We move to a state highway for safety and have nothing to eat for days because the government is slow and grossly inadequate in its relief effort," Paswan told DW. "Something needs to be done to stop this havoc," he added.

With millions struggling to cope in the flood-hit states of Assam, Bihar, Uttar Pradesh, Manipur and Gujarat, the Indian government has warned of more floods to come in 12 other states over the next week.

India's disaster mitigation and response mechanisms have once again come into question as for weeks the floods have caused immense damages to barrages, crops and entire villages. The reality on the ground of these flood-hit regions is arguably a stark reminder of the government's failure to prepare.

"Flooding during the monsoon season normally happens from June to September, but this year's floods have been much worse," Hari Balaji, a consultant on disaster management, told DW. "It has wrecked the village economy and ravaged cities. We have failed to predict rainfall intensity and its impact."

Aid agencies and the Indian government's own estimates reckon that over 1,000 people have been killed and more than 32 million affected - displaced or stranded - in this round of flooding.

Humanitarian organizations have warned the floods also have knock-on effects on children by disrupting their education and severely impacting their well-being in the future.

"We haven't seen flooding on this scale in years and it's putting the long-term education of an enormous number of children at great risk," Rafay Hussain of Save the Children in Bihar told DW.

Hussain explained that keeping children in school was crucial in sheltering them from exploitation, adding, "We cannot go backwards."

Although national disaster relief teams are responding in their own limited way in the relief effort, the response system has been wanting.

"It is high time we transit quickly to preparedness-centric approach. But in reality this is not the case, and we continue to be in the relief-centric mode," environmentalist Nitya Jacob told DW.

One way environmentalists believe this could be improved is if evacuated people had safe structures on firm ground and not in flood plains; something authorities have not been able to ensure.

Officials believe flood-related destruction can only be minimized if flood forecasting and mapping is accurate. Climate change however complicates this, as places which did not previously suffer floods are now experiencing unprecedented levels of rainfall.

Duggal also maintained that a lack of coordination and inadequate training at the ground level remained the biggest challenges in mitigating losses.

- Climate change - 'Asia is paying for the West's emissions'

- Water scarcity in Pakistan – A bigger threat than terrorism

Before the onset of the ongoing monsoons, Indian authorities did release guidelines spelling out how public agencies at district and local levels should act. However, despite the elaborate set of details, cities like the country's commercial hub Mumbai have fallen victim to nature's fury.

Suburban train services were crippled, airports and roads flooded and people waded through knee-deep water bringing the city to a grinding halt.

In recent decades, there has been an increasing trend of urban flood disasters in India that have swamped cities such as Hyderabad, Ahmedabad, Srinagar, Chennai, Kolkata, Jamshedpur and Guwahati.

The common reasons cited are unabated construction and encroachments of sprawling slums alongside rivers and streams, and the shoddy management of storm water drains carried out by civic contractors.

According to IndiaSpend, a public interest journalism website, disaster management is yet to be seen as an essential part of good governance and integral to development planning in India.

"Cities grow without adequate infrastructure, and whatever exists is inadequate for extreme rainfall," it said in a statement.

Without a shift in India's approach to natural disasters, the monsoon floods will continue to plague India's communities, both urban and rural.