Donald Trump's decision to decertify the Iran nuclear deal is a slap in the face for America's allies. The president risks isolating the US for the sake of his own fans — and his own ego, writes DW's Carsten von Nahmen. 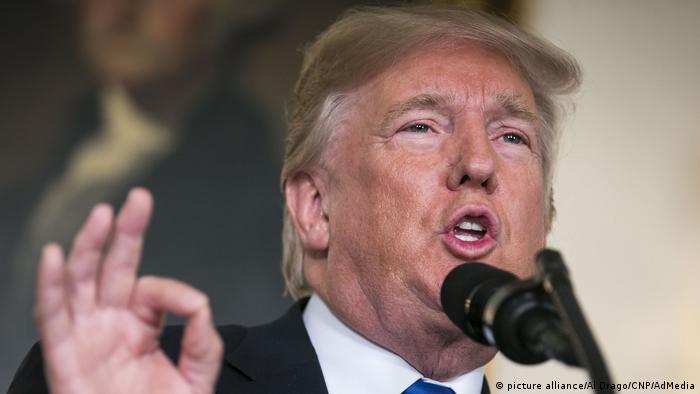 The protector of Americans against the big, bad world: that's how the president sees himself. And also how many of his supporters view him, and precisely why they voted for him. It was these supporters, more than anyone else, that Trump's speech was aimed at on Friday. It doesn't matter what the others think. America First. America Alone.

Throughout the 2016 election campaign, Trump described the 2015 nuclear deal that his predecessor Barack Obama had reached with Iran alongside European, Chinese and Russian partners as a mistake and the "worst deal ever." This campaign cry has followed him to this day, as has his promise to end the deal as president.

And still. Trump didn't go that far on Friday. Not yet. His most important foreign policy and security advisers, among them Defense Secretary Jim Mattis, Secretary of State Rex Tillerson and National Security Adviser H.R. McMaster, had strongly advised Trump against such a step, as Iran's nuclear armament ambitions could not be controlled at all without the deal.

Strictly speaking, there is no reason to terminate the deal. The Iranian government is meeting the obligations that the treaty imposed upon it. European allies, the International Atomic Energy Agency (IAEA) and even Trump's generals have confirmed this.

Changing the rules of the game

But always having to confirm to Congress and the American public every 90 days that Obama's central foreign policy legacy was actually working? That was just asking too much of Trump.

And so the president pulled an old trick out of the bag, one that he had so gladly used in his previous life as a businessman and reality TV star. He simply redefined the rules of the game, according to his own terms. The determining factor is not whether Iran is meeting the conditions of the nuclear deal, but whether Iran is living up to the "spirit" of the deal. And if it is, Trump said, it's also whether the Iranian government behaves itself otherwise.

Which, naturally, it not doing. The mullah regime in Tehran represses its own people, threatens Israel with total destruction and supports Syria's dictator Bashar Assad, the Lebanese Hezbollah and other militants and terror groups in the region. That is abhorrent and unacceptable. But it's not what the nuclear deal is about. It's about preventing an uncontrolled nuclear arms race in the Middle East, the world's perpetual crisis hot spot.

And the deal has worked. From the perspective of the West, it's not perfect. It could even be called a compromise. But it's better than no deal.

Some say the deal is not yet dead. Congress still can straighten out the situation.

But in truth, the damage has been done. The writing on the wall is that agreements made with the United States are not worth the paper on which they are written, because the current American president can — anytime, without due cause — call them into question without offering a realistic alternative.

On top of that, the fact that Trump shoves responsibility for the solution to the problem off onto Congress only shows how irresponsible this man is. Typical Trump, making a pompous pronouncement to feel good about himself and satisfy his supporters. Others can deal with the details, thank you very much.

All those who, perhaps, at the beginning of Trump's time in office had hoped that the populist would grow into his office and take his responsibility for his country and the world seriously are now disappointed.

'QAnon Shaman': US Capitol rioter sentenced to over 3 years in jail 2h ago

Opinion: Get vaccinated — and do it now 11h ago

Opinion: The climate-protection glass is half-full, not half-empty 14.11.2021