Malaysia Prime Minister Najib Razak has urged Myanmar to end its "genocide" against the Muslim Rohingya minority. Addressing foreign ministers at the OIC, Najib has warned the conflict could destabilize the region. 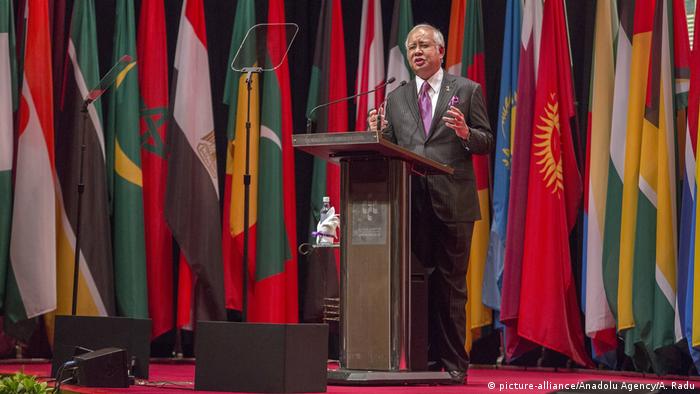 Malaysia's prime minister on Thursday warned that Myanmar's crackdown against the Muslim Rohingya minority has fueled an exodus of refugees and risks, creating a crisis Islamic extremists could exploit.

Prime Minister Najib Razak, addressing a special meeting of foreign ministers from the Organization of Islamic Cooperation (OIC) in Kuala Lumpur, described the crackdown in Myanmar as "genocide" and urged the world's Islamic nations to help end the unfolding "humanitarian tragedy." He also pledged to provide some 10 million ringgit ($2.25 million, 2.1 million euros) in humanitarian relief to assist the Rohingya people.

Malaysia has accused Myanmar of committing "genocide" against Rohingya Muslims. The bloody crackdown is quickly gaining a regional dimension. (04.12.2016)

Najib warned Southeast Asia's Muslim communities that the plight facing the Rohingya people was not just Myanmar's internal affair, but a "stain" that has fuelled an exodus of refugees that could destabilize the region.

The Malaysian premier also warned that the conflict could fan the flames of Islamic extremism. "OIC member states are well aware that terrorist organizations such as Daesh (the so-called "Islamic State" jihadist group) could seek to take advantage of this situation," Najib told foreign ministers. "This should concern the international community as a whole, as the threat of a new home for terrorist groups has the potential to cause death and destruction well beyond this region."

The OIC represents 57 Islamic nations and acts a collective voice for the Muslim world.

Security forces in the Buddhist-majority state are accused of carrying out widespread abuses against the minority Muslim group, including killing, rape and burning thousands of homes. The army's crackdown - or so-called "clearance operations" - began in October after nine Myanmar policeman were killed. Operations have concentrated namely in the Rakhine region on the border with Bangladesh.

Rohingya villagers and activists claim that hundreds of civilians have been killed since, although figures can not be verified as authorities have limited access for aid workers and journalists. Some 66,000 refugees are also estimated to have crossed the border into Bangladesh since the policemen were killed.

The plight facing the Rohingya people has put democracy champion and Nobel Peace Prize winner Aung San Suu Kyi under immense international pressure, having been accused of standing by amid the violence. She has since appointed a commission to investigate the allegations and urged the international community for more time in healing the country's complicated ethnic issue.

Najib pushes for action against Myanmar

Najib also sought to guarantee the well-being of the 56,000 Rohingya people in Malaysia, pledging additional funds and investment into infrastructure, education and medical institutions.

"Many have suffered appalling deaths, and those that have lived through the atrocities have witnessed or endured unspeakable cruelty," Najib told OIC delegates. "For a start, the killing must stop. The violation of women and girls must stop, the persecution of your fellow men and women, simply on the grounds that they are Muslim, must stop."

The Rohingya people have faced discrimination for generations and have been described by the UN as one of the world's most persecuted minority groups. Myanmar refuses to recognize them as an official ethnic group and describes them instead as illegal Bangladeshi immigrants, rendering them technically stateless with limited access to work and education.