The militant group "Islamic State" has said it carried out a twin suicide bombing in Beirut that killed more than 40 and injured 200. The target of the attack was Iran-backed Hezbollah's stronghold in Lebanon's capital. 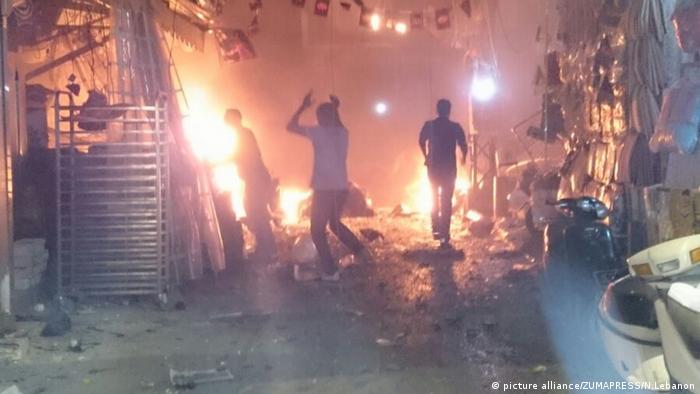 "The soldiers of the caliphate managed to place a booby-trapped motorbike near a mosque in a street called the Hussinyeh in Burj al-Barajned in Beirut's southern suburbs … targeting a gathering of Shiite heretics, where one of our heroic martyrs blew himself up," the Sunni terror group "Islamic State" (IS) said in a statement.

IS, which is active in Syria and Iraq and has captured vast swathes of territory in both countries, is known for its violent opposition to Shiite Islam and Iran-backed groups in the region.

The southern suburbs of Beirut are a bastion of Hezbollah, a Shiite armed group active in Syria and other conflict-ridden countries.

Hezbollah vowed to continue its fight against "terrorists" after the blasts.

"What happened here is a crime...this battle against terrorists will continue and it is a long war between us," Hussein Khalil, an assistant to the group's leader, said at the blast site on Friday.

One of the worst attacks

Residents of the area said they rushed to the scene after the first explosion on Thursday, and then the second one went off.

"We felt it was like an earthquake," Beirut resident Hussein Harakeh told the DPA news agency.

Lebanese troops and Hezbollah security personnel urged people to leave the area out of fear of more attacks.

"After the second explosion, I thought the world was ending," another witness told local media.

Sunni extremists have attacked the area several times in the past, citing retribution for Hezbollah militants fighting alongside government troops in Syria.

Thursday's bombing is the first such attack in Beirut's southern suburbs since mid-2014.

The United Nations condemned the attack as "despicable."

UN Secretary-General Ban Ki-moon urged Lebanese authorities "not to allow the despicable act to destroy the relative calm that has prevailed in the country over the past year."

The White House offered its condolences for the attacks, vowing that "such acts of terror only reinforce our commitment to support the institutions of the Lebanese state."

"The French share in the national mourning of the Lebanese," French President Francois Hollande said in a statement.