Is the Syria conflict an economic war? | Business | Economy and finance news from a German perspective | DW | 12.04.2018

Is the Syria conflict an economic war?

Every war has economic impacts. Escalating the conflict in Syria, a multi-sided proxy war involving multiple regional and global powers, will have broad consequences. Higher oil prices may be among the outcomes. 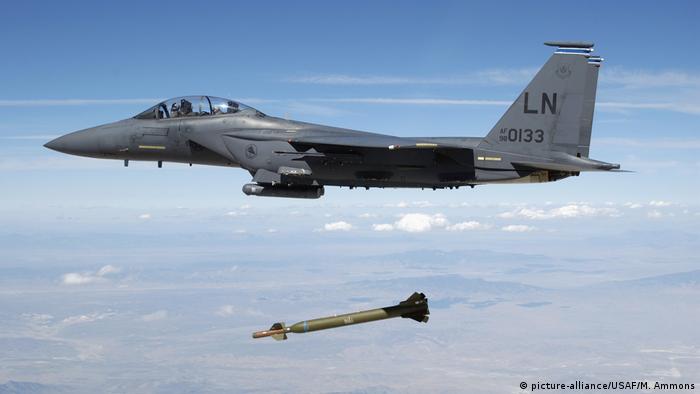 A remarkable series of events over the past few weeks have sent commodity markets analysts scrambling to assess how the prices of oil, gas, aluminum, and other commodities might be affected by rising geopolitical tensions between powers on opposing sides of the multi-party proxy war in Syria.

One stream of events centers on actions by the United States to isolate and weaken the economies of Russia and Iran, two countries seen by the US foreign and military policy establishment as enemies — the former a "revisionist power," the latter a "rogue regime," in the language of the official new 2018 National Defense Strategy of the United States.

In that context, a key instrument is a US law passed in 2017 by a Republican-dominated Congress, the "Countering America's Adversaries Through Sanctions Act" (CAASTA). In effect, CAASTA directs the US administration to wage economic warfare against Russia, Iran, and North Korea.

On April 6, the US used CAASTA to impose its toughest economic sanctions yet against Russian interests. The sanctions targeted seven high-profile Russian oligarchs and a dozen of their corporations, as well as 17 senior government officials. Among the companies sanctioned was Rusal, a metals company controlled by oligarch Oleg Deripaska, which analysts said would effectively be removed from world markets by the US's action. 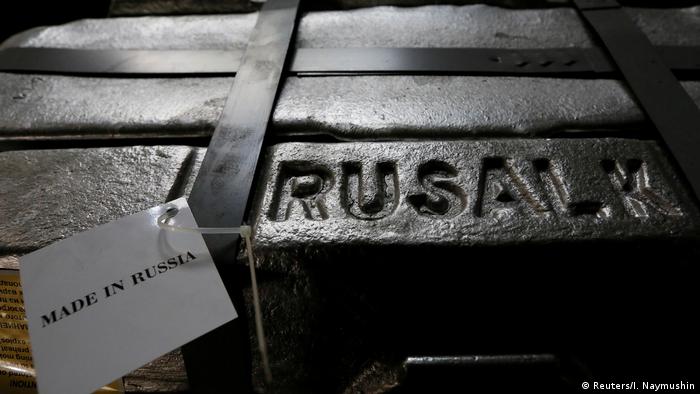 A Rusal aluminum ingot at the Krasnoyarsk smelter's shop. Rusal workers will be among those who pay the price for geopolitical games

Rusal is Russia's leading aluminum producer, with a global market share of 9 percent. The company's shares plunged on the Moscow stock market when the sanctions were announced, as did the value of the ruble. Reflecting an anticipated supply crunch, the world market price of aluminum rose by more than 10 percent over the past week.

The new sanctions imposed by Washington were not tied to any single specific action on Russia's part, but seemed rooted in a general condemnation of the country's leadership. The US Treasury Department, in its press release dated April 6, said: "The Russian government engages in a range of malign activity around the globe, including continuing to occupy Crimea and instigate violence in eastern Ukraine, supplying the Assad regime with material and weaponry as they bomb their own civilians, attempting to subvert Western democracies, and malicious cyberactivities."

It is not clear whether there is any strategic relationship between the sanctions on Rusal and the Trump administration's decision on March 8 to impose a new 10-percent import tariff on aluminum, as well as a 25 percent tariff on steel imports, in an effort to bolster the fortunes of US-based metals producers. 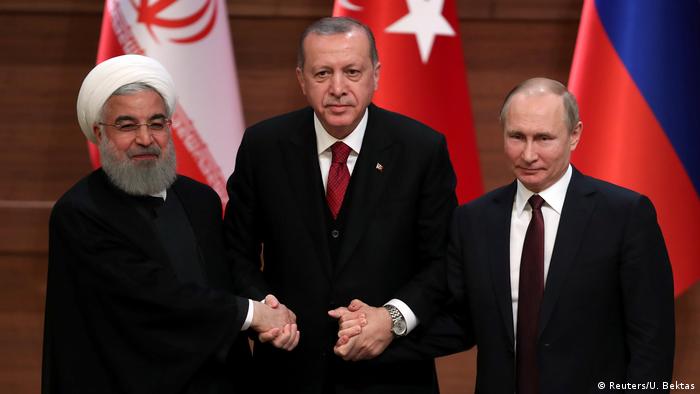 Two key Russian energy industry executives, Gazprom CEO Alexei Miller as well as Vladimir Bogdanov, head of Surgutneftegas, an oil company responsible for 11 percent of Russia's crude oil output, were also hit by sanctions, which will effectively bar them from travel or business in the West.

However, their companies, Gazprom and Surgutneftegas, were not put on the sanctions list. If the US were to impose sanctions against Gazprom, that would interfere with gas supplies to Europe. Such a move would likely be opposed by the US's European allies.

Sanctions on major Russian fossil fuels producers like Gazprom, Surgutneftegas or Rosneft would likely also push oil and gas prices higher. Oil prices have already been rising as a result of geopolitical tensions over the past year. From a low of about $43 per barrel in June 2017, crude is hovering around $67 this week. It has gone  up by $5 just since April 7. Prices are now at their highest level since 2014. 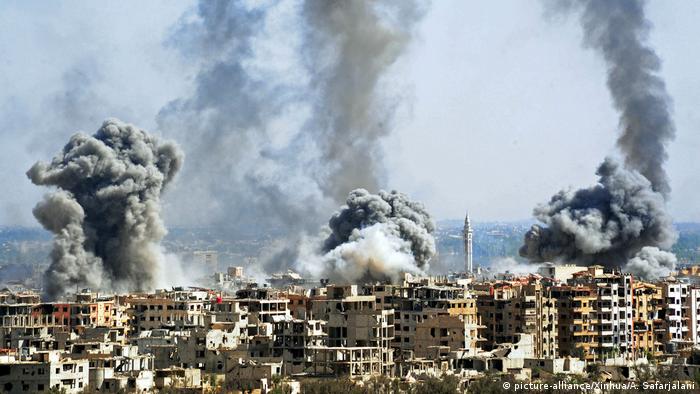 Smoke rises from buildings in Douma, Syria, on April 7, as a result of bombs and shells launched at the town during the final phase of fighting before the government's Syrian Arab Army retook the area from Jaysh al Islam

This week's oil price rise may be related to the heightened risk of a wider regional war centered on Syria. The Trump administration, echoed by the leaders of France and UK, has said that it is evaluating possible air strikes on Syrian government targets. Germany's leaders, by contrast, have already made it clear that Berlin will not participate in a military action.

The proposed attacks are being framed by Western governments as a response to the Assad regime's alleged lethal use of chemical weapons in Douma, a Damascus suburb, on Saturday, April 7, resulting in dozens of civilian deaths and hundreds of injuries. The alleged attack occurred just a few days before government troops recaptured Douma from Jaysh al Islam (Army of Islam), a Sunni armed group supported by Saudi Arabia.

The Syrian government has vehemently denied any such attack. The Russian Foreign Ministry, in a press release dated April 8, said: "False information is being planted about the alleged use of chlorine and other toxic agents by the Syrian government forces," and went on to call the reports of a chemical weapons attack in Douma "fake news" and "absolutely unsubstantiated lies."

Russian officials have also suggested that Russia would use its Syria-based air-defense assets to attempt to shoot down any missiles launched against Syria. Such an action would mean a direct clash between Russian and US, French or British weapons systems. 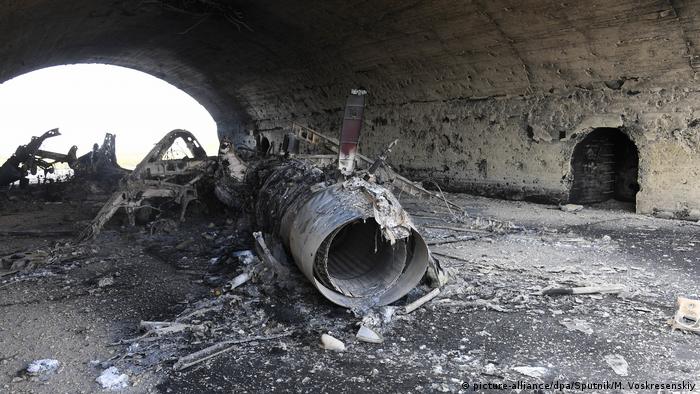 A year ago, after a lethal chemical gas attack on Khan Sheikhoun which the US blamed on the Syrian military, the US launched a barrage of cruise missiles against a Syrian air force base

Emmanuel Macron, the French president, said on Thursday, April 12, that France had proof that chemical weapons were used in Douma, and Paris would decide whether to launch strikes against the Syrian military "after it had received more information."

Goosing oil prices: not an easy task these days

Oil price forecasters say that over the next several years, oil is unlikely to rise much above $65 except for brief periods, since above that price, financial incentives are in place that lead to massive expansion of oil-shale drilling in the US, with consequent supply gluts several months later.

In effect, the financials of oil-shale drilling imply a cap on global prices in the $60 to $70 per barrel range. According to oil price forecaster Jim Williams of WTRG Economics, the only plausible excursions above that price range would be consequences of geopolitical events like wars or revolutions that interfere with oil production from major suppliers like Saudi Arabia, Iran, Russia, Venezuela, Iraq, or Kuwait.

The example of Libya, Williams told DW, shows that regime-change operations in oil-rich countries can have lasting impacts: Libya has still not recovered either stable governance or its pre-regime change oil output.

After Trump asked Saudi Arabia to list the oil giant Aramco in New York, Britain has raised the stakes for a London IPO. The UK government denies a $2 billion loan guarantee is an attempt to secure the listing. (10.11.2017)