India's top court has ruled that intercourse with a minor wife is illegal. There are an estimated 23 million child brides in India. 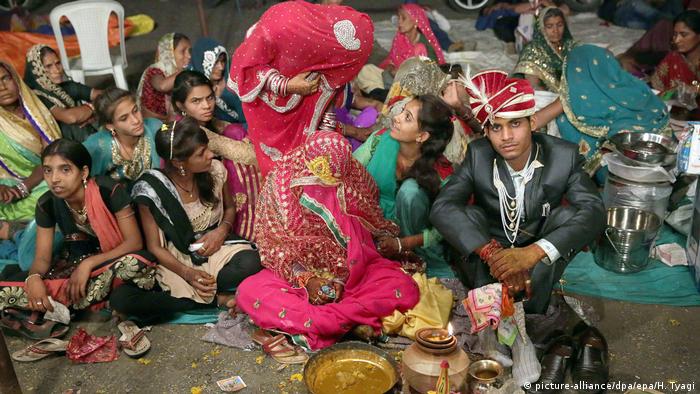 India's Supreme Court on Wednesday ruled that sex with any minor - including within a marriage -  is rape.

The landmark ruling closes a legal loophole that had protected men from legal punishment if their wife was under 18 years old.

"The minor wife can complain against the husband within one year," the Supreme Court said, according to NDTV.  "Exception in rape law is discriminatory, capricious and arbitrary...It violates bodily integrity of the girl child."

Sex with or without the consent of a girl under 18 years old is a crime. However, millions of young girls are married away, especially in poor rural areas.

The ruling overturns a provision in the penal code that allowed sex with a girl over 15 years-old if the couple was married. That penal code provision was in violation of laws establishing the legal age of marriage at 18 for women.

The court did not rule on a separate legal case on marital rape for adults.

Vikram Srivastava, a lawyer with the NGO Independent Thought that brought the case before the court, said the ruling would protect children.

The government has opposed criminalizing marital rape, arguing it would damage the institution of marriage.

It was also opposed to criminalizing sex with a minor wife, saying that child marriage was a reality in India given uneven economic and educational development.

Bride trafficking on the rise in India

The government estimates that there are currently 23 million child brides in India and that 46 percent of women aged 18 to 29 had been married before the age of 18.

"Hence, criminalizing the consummation of a marriage with such a serious offence such as rape would not be appropriate and practical," the government argued, according the Times of India.

An Indian man has allegedly been hacked to death by his wife's relatives because he was from a different caste. The UN says hundreds of so-called "honor killings" take place in India each year. (14.03.2016)

India's Supreme Court has banned a Muslim law that allows men to divorce their wives by saying the word "talaq" three times. In some cases, women were left destitute after receiving "triple talaq" WhatsApp messages. (22.08.2017)

Murder of schoolboy raises specter of child abuse in India

The killing of a boy allegedly by a school bus conductor who tried to sexually abuse him has put the spotlight on the safety of children. A study shows half of all children in India have been a victim of sexual abuse. (09.09.2017)