Three people have been arrested in northern Germany on suspicion of trafficking Moldovan nationals on fake Romanian passports. Evidence suggests the networks may have links to the far-right Reichsbürger scene. 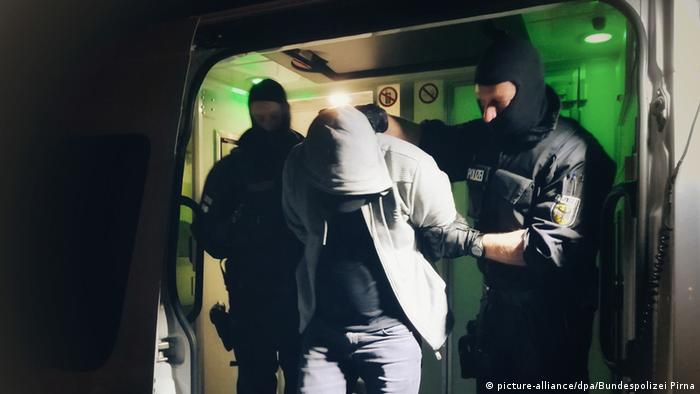 Some 800 German police officers in the German states Bremen, Hamburg and Lower Saxony raided several apartments and offices connected to a human trafficking ring late on Monday and in the early hours of Tuesday morning.

According to local media reports, three men were arrested — two Germans and a Russian national — on suspicion of smuggling Moldovan citizens into Germany on fake Romanian passports and employing them in security services.

Police said they had been investigating the smugglers since October last year. At least five other people are believed to be part of the trafficking network, including an Austrian family that reportedly owns the security firm that illegally employed the trafficked Moldovans.

The company had allegedly won contracts to supply security services to Hamburg's ports, a number of constructions sites and even homes for asylum seekers.

Connections to the Reichsbürger

Reports also suggested that police found evidence linking at least one of the traffickers, the accountant for the security firm, to the far-right Reichsbürger movement. The accountant's ex-husband and son reportedly run the security company. According to local media, the accountant — whose office was raided overnight on Monday — is currently living with a former officer from Germany's special SEK police unit.

The term Reichsbürger, which roughly translates as "Citizens of the Reich," is used as a label for a loosely connected group that rejects the legitimacy of Germany's federal government. Its followers believe that the 1937 borders of the German Empire still exist and that today's Germany is an administrative construct in a country still occupied by foreign powers. Many also subscribe to far-right or anti-Semitic ideologies.

German authorities estimate that some 18,000 people subscribe to the movement, around 1,000 of whom identify with extreme right-wing ideology.

The threat posed by the group has become increasingly prominent since late 2016, after one of its members in Bavaria opened fire on a group of police officers during a raid, killing one.

Probes into the far-right have since uncovered a handful of public servants who identify with the movement, including four civil servants in the state of Hesse, three police officers in Saxony and a policeman in Bavaria.