EU leaders stop short of sanctioning Russia over Aleppo | Europe | News and current affairs from around the continent | DW | 21.10.2016

Despite the daunting range of Russian threats, EU leaders in Brussels sent no return fire. They were unable to muster anything other a vague warning on holding Russia accountable for its behavior in Syria. 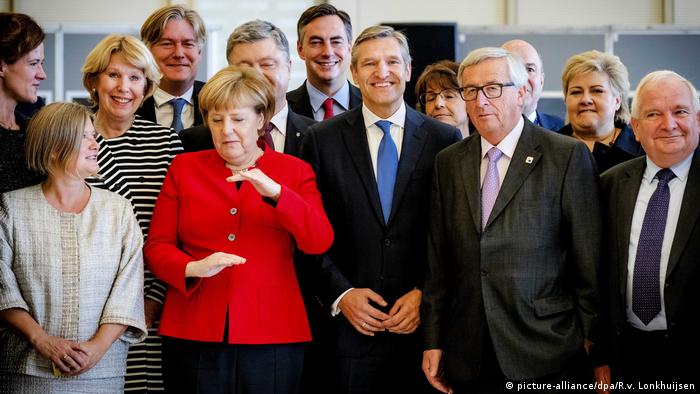 European Council President Donald Tusk summed up the evening's comprehensive debate over Russia policy with a stark declaration: "it is clear that Russia's strategy is to weaken the EU." Tusk said the dialogue among the 28 leaders had covered everything from "airspace violations, disinformation campaigns, cyber attacks, interference into the political processes in the EU and beyond, hybrid tools in the Balkans, to developments in the MH17 investigation."

Despite this daunting range of Russian threats, EU heads of state and government mustered no return fire. They were unable to go any further than their foreign ministers had earlier in the week on holding Russia accountable for its behavior in Syria. The evening debate did not result in a specific threat of sanctions for Moscow's bombing campaign in Syria, as some governments had wished, but a vague warning that the "EU is considering all available options, should the current atrocities continue." The statement calls for extension of the ceasefire the Kremlin has offered for a couple of days, for more access for humanitarian relief and for creating conditions to negotiate a political solution.

Tusk described these results as agreeing to "stay the course" and "keep the unity of the EU".

Speaking in the early morning hours, German Chancellor Angela Merkel acknowledged that despite a "very far-reaching and very good" discussion among the 28 leaders, "that doesn't automatically mean that in every particular individual case you can agree on the one answer to each and every issue." She added, however, that there was a common understanding that they must "get there", to deal with a Russia that is not acting "in a spirit of partnership". Merkel said "only if we do so will we be strong enough where we constitute a force or power that will be able to defend the interests of Europe."

Longtime EU watcher Ben Nimmo, a senior fellow with the Institute for Statecraft in London, says while summit statements like this one may not provide much deterrence against Moscow at the moment, it's important that the 28 governments are at least attempting to get on the same page. He says that's not easy but it is essential, especially with "more and more research done into the kind of covert intelligence operations that the Russian government is conducting in a whole range of Western countries, notably the US and in central Europe.

Nimmo researches Russian disinformation efforts and says this is a particular problem in particularly the Czech Republic, Slovakia and Hungary. "There are real concerns about the situation there," he said. "Plus on top of that you've got more and more obvious Russian interference in the US election and while that's not directly a European issue, I think for some member states there's this feeling 'God if they're even going to do it the US, this is a real thing. It's not just a fantasy of some small paranoid Baltic states'."

Aleppo is just an example

Former Estonian president Toomas Ilves, who just ended a decade in office, confirms that Estonian and other Baltic leaders were often accused of exaggerating the pervasiveness of Russian interference. That's changed now, he says. But nevertheless, Ilves doesn't believe the EU will be able to muster a stronger stance against the Kremlin in the near term, no matter how disturbing Aleppo is. He points to the example of Russia's annexation of Crimea and the ongoing war between the Ukrainian government and the separatists backed, funded, equipped and trained by Moscow that began over two years ago.

"We are we are dealing with is a fundamental breakdown of the treaty-based security architecture in Europe," Ilves notes, yet "it took a year for the European Union to actually go beyond 'grave concern' and admit that the issue was not 'Russian-backed separatists' in the Donbas…that there were large contingents of the Russian army in the Donbas."

His theory is that what finally pushed EU leaders to schedule a comprehensive dinner debate on Russia is not just Aleppo, certainly not Ukraine, but the overwhelming combination of hostile activities in which Moscow is accused of being involved. That includes cyber attacks on both the German parliament and US political entities and processes, the massive state-funded effort to spread disinformation particularly in Europe and the US, and the funding of extremist political parties in Europe ahead of critical elections next year. "We've seen this across the board," Ilves points out, "and I see that European leaders are beginning to be distressed."

Playing by the book: the Kremlin Playbook

Some experts say that reaction is far too late. Heather Conley is a former US State Department official who co-authored a 16-month study on Russia's attempts to influence five EU members: Bulgaria, Hungary, Latvia, Serbia, and Slovakia.

The "Kremlin Playbook" released earlier this month by the Center for Strategic and International Studies (CSIS) in Washington, DC and the Sofia, Bulgaria-based Center for the Study of Democracy details Russia's covert efforts to wield economic and political might in cental and east European countries and to undermine EU cohesion and transatlantic ties. Conley's research shows Moscow's been extremely effective in these aims, using a "strategy of influence, not of brute force."

Conley says the European Union really needs this wakeup call to unite and stop taking their relatively strong democratic systems for granted in the face of a multifaceted Russian effort to undermine them. She said European leaders must "not only reaffirm the values that the transatlantic community stands for, that Europe stands for, they're going to have to sacrifice for those," she says.

Moscow has said the ceasefire will enable civilians and rebels to leave the city's besieged eastern areas. The UN hopes to carry out a medical evacuation on Friday but admits "everything can go wrong." (20.10.2016)

At the EU summit in Brussels, Germany and France have called for Russia to be punished for its military actions in the Syrian city of Aleppo. Achieving unity, however, will be difficult. (20.10.2016)