Austria has said it will set a daily cap on the number of refugees allowed to enter the country. Ahead of an EU refugee summit on Thursday, the country's chancellor said Germany would eventually follow suit. 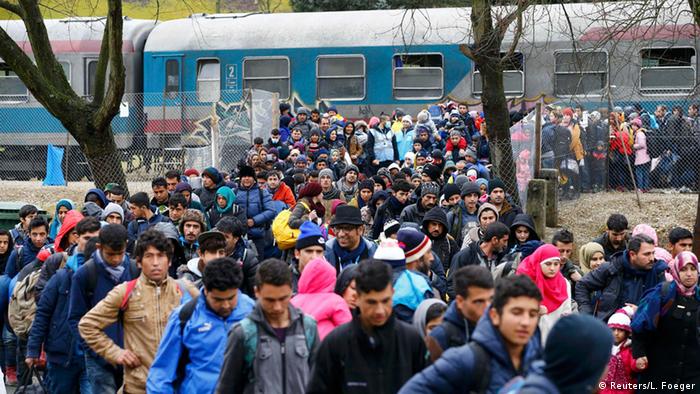 Austria will set a daily cap of 3,200 migrants allowed to enter the country and limit daily asylum claims at 80, Interior Minister Johanna Mikl-Leitner said on Wednesday.

The announcement comes a day after Austrian authorities said border checks would go up at 13 border points with Slovenia, Italy and Hungry to stem an influx of migrants coming through the Balkans.

The daily cap on migrants allowed in the country would apply to those "who want to seek asylum in a neighboring state," the interior minister told APA news agency.

"Austria is among the EU countries most under strain and is reaching breaking point. It stands to reason to want to secure your own borders when there is no European solution," she said.

After accepting 90,000 asylum seekers last year, Austria said last month it would accept only 37,500 asylum seekers this year. However, authorities have still not said what would happen when the cap was reached.

Many of the nearly 1.1 million migrants who reached Europe's shores last year - almost half of them from Syria - passed through Austria on their way to Germany and Sweden, the two countries to take in the most people.

The number of migrants arriving in Austria has fluctuated, with a notable slowdown to about 1,000 a day during the winter months.

The refugee crisis has put mounting pressure on German Chancellor Angela Merkel's open-door policy from a skeptical public and even some within her own party and coalition.

Merkel has defended an open-door policy and multipronged European approach to resolving the refugee crisis, pinning hopes on a deal struck between the EU and Turkey last year to stem the influx of migrants into the EU and protect the 28-member bloc's external borders.

However, the impact of that deal has been slow to develop as the EU's flagging collective response threatens the future of the bloc.

Ahead of a critical EU refugee summit on Thursday, Merkel on Wednesday told the German parliament the EU was faced with the choice of implementing the deal with Turkey or endangering the EU project with a barrier on the Greek border with Macedonia and Bulgaria.

Austria has aligned itself with the so-called "Visegrad Four" - Hungary, Poland, Slovakia and the Czech Republic - which are pushing to protect the EU's external borders and to tighten internal border controls. They also oppose an EU redistribution scheme for refugees.

Austrian Chancellor Werner Faymann said in an interview on Wednesday with the "Kurier" newspaper that he was willing to give the Turkey deal a chance but that the EU must be prepared with other options.

"I would like for Turkey to take stronger actions against migrant people smugglers... and for Turkey and Greece to strike a deal to return rejected migrants," Faymann told the "Kurier."

"We must also prepare tougher border measures" in case the EU efforts fail, he added.

Commenting on Austria's decision to set a cap and throw up border controls, he said, "We have done this and I believe we have set an example that Germany will also set shortly."