Syria's military has told Aleppo residents to use an 11-hour "pause," said to have come into effect, to leave Syria's rebel-held city. Civilians are not likely to emerge unless corridors are supervised by the UN. 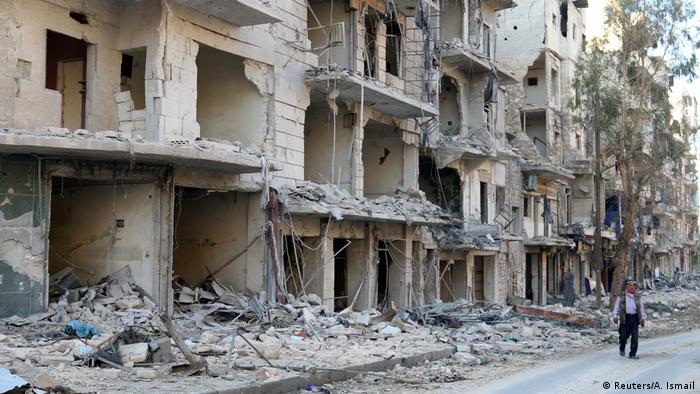 "We guarantee a safe exit, save your families," blared a Syrian army message near one of two exit corridors - near Aleppo's Castello road and its Bustan al Qasr quarter - designated by the regime of Syrian President Bashar al-Assad.

There had been no reports of people trying to leave, said Rami Abdel Rahman, who heads the Britain-based Syrian Observatory for Human Rights.

Two hours into the "pause" the French news agency AFP reported that shots had been fired amid "clashes."

"Without UN supervision no one will leave," Ibrahim al Hajj of Syria's civilian White Helmet rescue team told the German news agency DPA, referring to up to 300,000 people trapped for months in eastern Aleppo.

On Wednesday, Syria's foreign ministry had said troops would pull back to facilitate the exit of rebel fighters, who had also said they would not leave eastern Aleppo, the last major urban center controlled by opposition forces in Syria.

Putin, visiting Berlin on Wednesday evening, was told by French President Francois Hollande that joint Syrian and Russian bombing of Aleppo was a "war crime."

Host German Chancellor Angela Merkel described events in Aleppo as "inhumane and cruel" and said the three-way talks with Putin were "very tough." 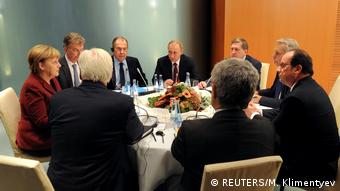 Ahead of the Berlin encounter, Moscow said the "pause" would be extended from eight to 11 hours.

United Nations envoy Staffan de Mistura said the short break would only enable the evacuation of 200 wounded persons from the devastated city.

The UN's Geneva-based humanitarian agency said "really meaningful" help would only be possible when all conflict parties gave assurances for a lasting ceasefire.

EU leaders due to meet at a summit in Brussels Thursday were expected to jointly condemn Moscow for past air raids on Aleppo, according to a draft statement obtained by AFP.

Five years of diplomatic effort have failed to put an end to Syria's conflagration.

Talks were also held Wednesday in Geneva between Russian, US, Saudi, Qatari and Turkish officials on how to distance Syrian opposition fighters from jihadists.

It claimed that as many as 200 militia personnel had been killed.

Anadolu had reporter earlier Wednesday that the Kurdish "People's Protection Units (YPG) militia had attacked Turkish-based rebels in the region.

The Britain-based Syrian Observatory for Human Rights said it had no information on such an incident.