Zuma returns to parliament a week after chaotic address

Just a week after fights broke out in parliament during South African President Jacob Zuma's national address, the leader returned to present his policies. 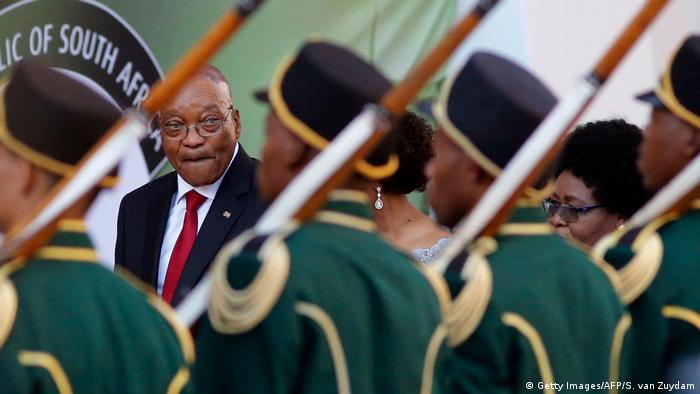 When President Jacob Zuma delivered his state of the nation address last week, he was not only interrupted, but also described as a "failed president" who should "step down immediately." Fights then broke out between security personnel and members of Julius Malema's Economic Freedom Fighters (EFF).

Over the past two days, the ruling ANC and opposition members were once again involved in name calling and crude insults. Thursday's address escaped being disrupted because of the absence of members of the EFF.

EFF leaders have been barred from parliament for ten days and Zuma made it clear that the type of un-parliamentary behavior seen last week would not be tolerated.

"We again appeal to those MPs and parties that have taken a decision to cause mayhem in the house to use available democratic mechanisms to express themselves within the bounds of decency and decorum," he said. "As adults we can disagree ideologically but we cannot lose the track of national interest."

A return to form

In his address Thursday, Zuma reiterated his party's policies of radical economic transformation and land redistribution and said that they would continue to help the black majority.

"Freedom gained in 1994 must be accompanied by economic freedom for the blacks in this country and Africans in particular. We are not going to be apologetic about that. It is part of the South African story," he said.

Zuma added that his government was shocked by some of the reactions of the opposition who said that radical economic transformation in South Africa would not succeed.

"That is a confirmation that some of our compatriots are determined to defend and protect the status quo and ensure that the ownership, control and management of the economy remains skewed in favor of a racial minority," said Zuma.

This prompted the leader of pro-Afrikaner party Freedom Front Plus, Pieter Groenewald, to accuse Zuma of hating whites, a charge which Zuma rejected.

"Affirmative action and black economic empowerment do not demonstrate hatred of white people." he said.

A brawl broke out in South Africa's parliament as President Jacob Zuma tried to give his annual state of the nation address. Members of the Economic Freedom Fighters were ejected after heckling the president. (09.02.2017)

South African president Jacob Zuma is set to deliver his annual state of the nation address on Thursday after deploying more than 440 soldiers to prevent a repeat of violent clashes outside parliament. (09.02.2017)

President Jacob Zuma has promised to address problems of corruption and infighting within the ruling ANC party. The ANC Women’s League said that they would back Nkosazana Dlamini-Zuma as a presidential candidate. (08.01.2017)