The Ukrainian president said Joe Biden should have met with him before meeting Vladimir Putin. The US and Russian leaders are set to meet in Geneva on Wednesday. 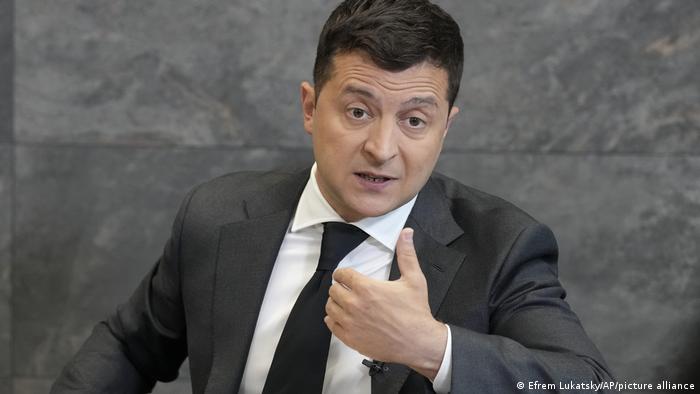 Volodymyr Zelenskyy has some concerns ahead of the Biden-Putin summit

Ukraine President Volodymyr Zelenskyy said on Monday that Joe Biden should have met him first, before the US president meets his Russian counterpart, Vladimir Putin, later this week.

"It would be better to have this meeting before the summit of the two presidents," Zelenskyy said, with the US and Russian presidents set to meet for the first time in Geneva on Wednesday.

His comments coincided with Monday's NATO summit in Brussels, attended by Biden.

Zelenskyy also expressed "skepticism" about whether the summit in Switzerland would prove positive for Ukraine.

The conflict in eastern Ukraine, including an escalation of tensions since the start of 2021, is expected to be high on the agenda in Geneva.

By April, Russia had amassed some 100,000 troops near the Ukrainian border and in Crimea.

After weeks of tension, the Kremlin then ordered its soldiers back from the border, a move welcomed at the time by Zelenskyy.

Earlier this month Biden reaffirmed support for Ukraine's territorial integrity and invited the 43-year-old Ukrainian leader to the White House for talks in July.

The Ukrainian leader said he wants a clear "yes" or "no" from Biden on giving Kyiv's plan to join the military alliance.

"We are proving every day that we are ready to be in the alliance more than most of the EU countries," Zelenskyy said.

Ukraine first applied to join the US-led alliance in 2008 but then shelved those plans in 2010 with the election of pro-Russia President Viktor Yanukovych. After Yanukovych was ousted and Russia annexed Crimea, Ukraine's new government made NATO membership a renewed priority.

But NATO members remain reluctant to embrace Ukraine as they want to avoid ratcheting up tensions with Moscow after years of eastward expansion by the alliance.

After NATO's communique was released later on Monday, Zelenskyy wrote on Twitter that "NATO leaders confirmed Ukraine will become a member of the Alliance."

That claim, however, arguably went somewhat further than item 69 of 79 in the NATO communique did. Although it did "reiterate the decision made at the 2008 Bucharest summit that Ukraine will become a member of the Alliance," it also listed an array of "wide-ranging, sustainable and irreversible reforms" which would be necessary "to reach its [Ukraine's] objective of implementing NATO principles and standards."

Chancellor candidate Armin Laschet has said Germany must seek areas as of cooperation with Russia, while also pushing back on critical issues. He said Berlin's strategy in dealing with Moscow also depended on its allies.

The well-known politician, who was arrested last week, said he had received warnings that criminal cases were being staged against him to prevent him from running for parliament.