Your stories: 'The first orphan I knew in this world was me'

After his mother and father died, Reuben from Ghana struggled with more than just the loss of his parents. Read his first-hand account of how a song and some unexpected support helped him cope with being an orphan. 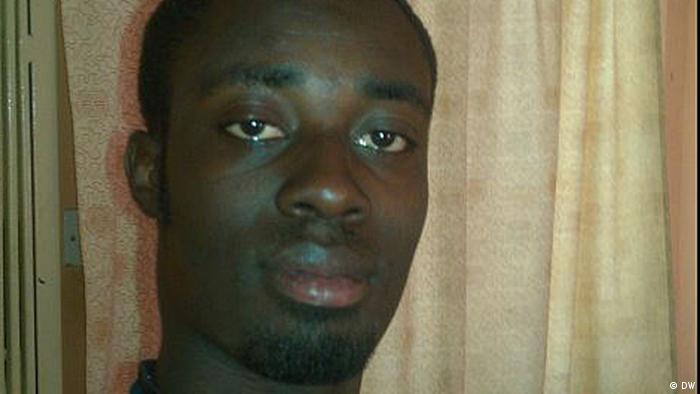 “The first orphan I knew in this world was me.”- #link:http://www.twitter.com/RGBekoe:Reuben Griffiths Bekoe#, Ghana

I loved the lyrics of the song "Agyanka Dabre" by the Ramblers Dance Band even before I became an orphan. But I couldn’t understand the true meaning of the song before I knew what it felt like myself. When I lost my parents I knew: this is not fiction, it’s reality.

I was only 11 years old, but still I remember the night of April 26, 2005 like it was yesterday. That Tuesday evening became one of the worst nights of my life. Who could have imagined that my strong dad would leave the house to go to the hospital and never return? To me it was very hard to understand and deal with.

And then the worst and least expected happened - my mother died on July 1, 2006 and I was left wondering: how on Earth can I lose my roots just within a little more than a year? If my life had been a movie I would’ve asked the director to change the script. 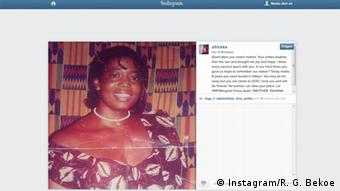 Reuben posted this picture of his mother on Instagram on the eight-year anniversary of her funeral, saying: "You may be far away but you are closer to GOD."

After the funeral of my parents my life completely changed. I began to feel the cold hands of life during the Harmattan season: the hot wind that blows sediment from the Saharan region out to the Atlantic Ocean during the dry period from December to March. Back then I used to wake up around 4 am to go to a farm to uproot cassava and then sell the cassava to the chop bars to save money for my further education.

At the beginning I didn’t like the work; I remembered the better life I had with my parents too well. But after a while I managed to see the positive even in a negative situation. There is always a silver lining - in this case it was that waking up at dawn to go to the farm later helped me to wake up at dawn during my days in secondary school.

It was during that time that the “Agyanka Dabre” song lyrics popped up in my head again. This time they were very loud and clear, I could hear the Ramblers telling me in Twi language:

"When a father dies, there’s a father alive, that's said to comfort the mourners…"

I agree with these lyrics very much even though I still haven’t found that second father yet. For some time I lived with the illusion that my uncle might be that person, until he told me the bitter truth when he said I shouldn’t address him as "dad." If you ever lose a parent and someone promises you to step in for that beloved person you lost - don’t believe it, that’s a complete lie.

Sure, my story is not exemplary for all orphans out there. But I think at least some of them have similar experiences or might even live a life that's worse than mine.

My parents lived a good life, which I benefitted from. I used my mother's benefits from the National Insurance Trust for my secondary education but unfortunately that wasn't enough. In the end, I had some support from a couple of family members and was able to complete my fourth year in high school, which is something most orphans in Ghana wouldn’t get the opportunity to be doing.

Despite the fact that I was lucky enough to be able to go to high school, I was always lacking security and love. The four years during secondary school were the worst part, as I had no family member visiting me or attending school meetings. It’s difficult to hear your classmates talk about their parents and you dread them asking you: "so where are your parents?" That question can make you feel down for the whole day. But I learned to live life for myself and to protect myself. Orphans often lack the self-confidence to do that.

My life as an orphan isn't only negative though. I’m 20 years old now and I love the life I have had and that I am living right now. I live in Accra, the capital of Ghana, with my sister and brother-in-law. I am a senior high school graduate. I want to be a broadcast journalist or a humanitarian aid worker for the United Nations. It would have been much easier with my parents around, because I would have had someone who listens to my problems, and I would already be enrolled in university after almost a year of having completed high school.

And even though some of my family members rejected and neglected me, not all of them did. Those I assumed would reject me did not. So I define family as those who value, love and accept you, those who want to be in your life and want you to be in theirs. They see the tears behind your weak smile.

I’ve learned that there are things in life which I can overcome and which I don’t allow to hold me back in life.

That’s the message I would like to give to everyone who has experienced what I have. To everyone else I’d like to say: have you ever wondered how many people are facing these kinds of problems and are not getting this platform to let it out? Who will speak out for these people?

WHO AM I?
Who am I?
I am the boy with a black skin which every negative is attributed to.
My contribution is always seen as dark and not welcomed
Who am I?
I am the girl who is seen around guys
Whom in their eyes I’m a slut and whore for turning them down
Who am i?
I am the boy in crutches
Who is fit but not fit in the society but fit for social media
Who am I?
I am the autistic man
Who everyone mistake’s for a moron
Association with me is curse
Who am I?
I am the guy who never smiles,
Not because I don’t want to but because I wear braces.
Who am I?
I am the silent student in the class,
I want to answer questions but I am shy to
Because you’ll laugh at me because I stammer.
Who am I?
I am the kid who doesn’t talk sense and seen as mad,
I do but you refuse to think outside the box
Who am I?
I am the one, who never loves,
I love than love but I don’t have a heart to love again
It was love which made me heartless not careless.
Who am I?
The unsociable dude in the community
I would love to hang around with you
But I’m seen as a problem since am an orphan.
Who am I?
I am the widow who’s afraid to wear new clothes
I’ll be seen as a witch for killing my husband.
Who am I?
The timid boy at the canteen,
I’m not but can’t deal with rejection.
I’m emotionally rejected at home.
Who am I?
The boy you always call a gay,
I am not gay but I am not circumcised.
I can’t stand the rejection of a woman.
Who am I?
The girl who turn guys away
Sorry, it’s no fault of mine
I don’t want to hurt anyone like myself
I got no feelings, for I am a FGM victim
Who am I?
I am a human with red blood
I breathe freely like any other person
Before my race, religion or education
I am a human!
See me as one before my sexuality, gender, height or occupation.
We may not reason together but respect my views.
Before you talk about me,
Please understand and love me.