Young activist fights to criminalize catcalling in Germany | News and current affairs from Germany and around the world | DW | 15.03.2021

The murder of Sarah Everard in London has sparked fresh debate about harassment and assaults against women. In Germany, one young woman is campaigning for the introduction of a "catcall law." 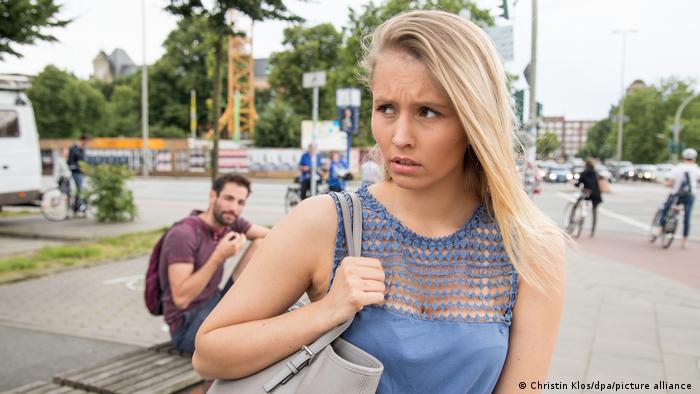 Public harassment is a fact of life for women everywhere

"Hey, blondie!" "Babe, come over here!" — many men still think this sort of lewd comment, along with wolfwhistles and obscene gestures, is a compliment. For women it's outright harassment.

Catcalling — sexually suggestive and inappropriate remarks directed at women by strangers — occurs both in public and on the Internet. All the time. 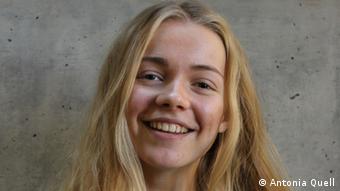 Antonia Quell wants Germany to introduce a law against catcalling

But in Germany, it goes unpunished. Antonia Quell, a 20-year-old student and activist from Fulda, in Hessen, is campaigning to get a law introduced that will help put a stop to it. In August, she launched an online petition addressed to the Justice Ministry and the federal government. Nearly 70,000 people have signed it.

Not a criminal offense in its own right

"Not every man does it, but every woman has experienced it. Catcalling, as verbal sexual harassment is called. Catcalls should not be confused with compliments. Catcalling is an abuse of dominance and power," the petition says.

In Germany, verbal sexual harassment is not categorized as a criminal offense in its own right, a point the petition seeks to address. According to the legal definition, physical contact is a prerequisite for sexual harassment.

The German Criminal Code specifies penalties for public insults in the form of a fine or, in special cases, imprisonment for up to two years. In some cases, this article of the law also applies to public verbal sexual harassment.

"That is the case when the language used is clearly degrading," says Anja Schmidt of the University of Halle-Wittenberg — for instance when sexually debasing remarks are directed at women or transgender persons.

Saying things like "nice figure" do not fall under this article. They are not classified as sexual harassment because, according to the current definition, only physical contact constitutes a criminal offense. The situation would be clearer if catcalling were considered a separate criminal offense, says Schmidt, whose field of research includes sex crimes legislation.

Quell proposes that Germany follow in the footsteps of France, where this type of verbal harassment was made a criminal offense in 2018 and is now punishable by up to €750 ($910). Catcalling is also outlawed in Portugal, Belgium and the Netherlands.

Harassment and flirting are not the same

According to a survey by the Foundation for European Progressive Studies (FEPS), two out of three women in Germany have been targeted by catcalls on the street at least once over the past two years. More than 40% have faced slurs, jokes, sexist insults or sexual gestures. One out of three are younger than 25.

Cases differ, of course, and some women don't always mind the attention, Quell said. "If a woman likes it, that's her right," she says, adding that one should still be heedful of those who are uncomfortable and distressed by catcalling.

"Over the years, the various incidents you and your friends experience add up," Quell says. "I believe most women who live in cities are well aware of the phenomenon."

Quell recalls riding her bike home one evening when two men in a car next to her handed her a bottle out of the window, offering her a drink. When she told them to get lost, they flung insults at her. Women know that this sort of harassment, she says, often goes hand in hand with aggression.

India: Speaking out against harassment of domestic workers

Antonia Quell is keen to see Germany reappraise its stance on catcalling. Above all, she wants to see this behavior redefined as unlawful.

But critics of the plan doubt that German society is ready for a catcall law, while others think the problem is too vague. They argue that what constitutes harassment is a subjective opinion and that it's impossible to define verbal sexual harassment. Others question whether it can be proven and perpetrators identified. Making it a criminal offense would create an atmosphere of mistrust, opening the door to threats and reprisals, they say, and men might end up falsely accused.

Documenting the evidence is an issue with almost every crime, Quell argues, and especially in cases of insults and sexual harassment. "But it's not my job to figure out how to prosecute it," she says. "That's up to the government and the legislators."

Schmidt said evidence must be evaluated on a case-by-case basis. In instances of verbal sexual harassment, witnesses or recordings can be helpful. In instances of online harassment, it's easier to amass evidence. But Schmidt stresses that first of all, attitudes need to change.

"The authorities and courts need to become more aware of these forms of gender-based nonphysical violence," she says.

Tragically, it took the recent murder in London of Sarah Everard to bring the issue center stage. 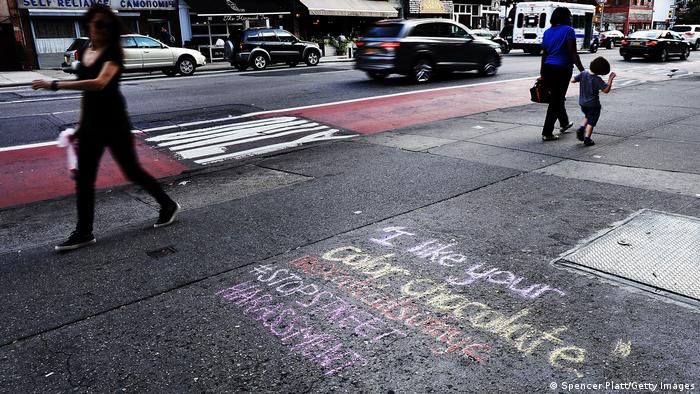 Schmidt strongly believes that society in general needs to play a part in raising awareness, and welcomes Quell's petition against catcalling.

Now that it's been signed by a sufficient number of people, it's set to be assessed by a petition committee in the German Bundestag. If it comes to the conclusion that the current laws regarding catcalling should be reappraised, it can initiate a debate in parliament. A similar campaign was successful in the case of upskirting, which the German parliament categorized as a criminal offense in July 2020, punishable by a fine or up to two years in prison. That, too, started with an online petition launched by two young women.