Massive protests continue in Yemen, despite the killing of more than 40 demonstrators and President Saleh's declaration of a state of emergency. Police later storm one of the protesters' camps. 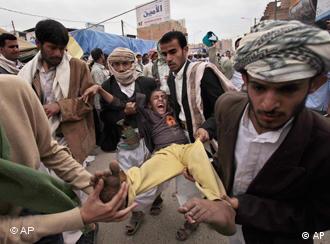 Dozens of anti-government protesters have been killed

Tens of thousands of anti-government demonstrators continued to gather in Taghyeer Square in Sana'a on Saturday, a day after President Ali Abdullah Saleh announced a nationwide state of emergency. This followed the bloodiest outbreak of violence since anti-government protests began.

Witnesses and a security official said police stormed a protest camp in southern Yemen on Saturday, where thousands are calling for the country's longtime president to be ousted. The raid was the latest attempt by security forces to put down growing unrest.

Violence continues to escalate in Yemen

On Friday, doctors in the capital Sana'a said regime loyalists opened fire on a group of protesters who had gathered near the city's university following Friday prayers.

More than 46 people were said to have been killed and more than 200 wounded, taking the death toll to over 60 since the protests against Saleh's autocratic rule began last month.

Saleh's weak central government is a US ally in the fight against al-Qaeda. He also faces two armed insurrections and an active al-Qaeda branch.

In a concession, Saleh had offered to hold a referendum on a new constitution that would devolve power to parliament and said he would not run again when his term expires in 2013. However, the opposition has said his proposal don't go far enough and called on him to resign immediately. Saleh has been in power for 32 years.

A spokesman for the opposition said Friday that a compromise was now out of the question following the latest violence. "There is no longer any possibility of mutual understanding with this regime and he has no choice but to surrender authority to the people," said Yassin Noman. 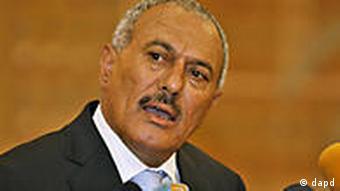 President Saleh's autocratic regime is an ally of the US

US President Barack Obama condemned the violence and urged the authorities in Yemen to protect peaceful protesters.

"It is more important than ever for all sides to participate in an open and transparent process that addresses the legitimate concerns of the Yemeni people and provides a peaceful, orderly and democratic path to a stronger and more prosperous nation," he said in a written statement.

The UN and the EU also urged an immediate end to the violence.

"Human rights and fundamental freedoms must be fully respected," said EU foreign policy chief Catherine Ashton. "President Saleh must stand by his commitments to uphold the right to peaceful protest."

Encouraged by events in Egypt, anti-government protesters in Yemen have taken to the streets demanding the president's ouster. Police and government-backed gangs have responded with force as tensions run high. (14.02.2011)