The Greek people are paying dearly for having been lulled into a false sense of security, writes former Finance Minister Yanis Varoufakis. Germans, he says, are laboring under the same illusion today. 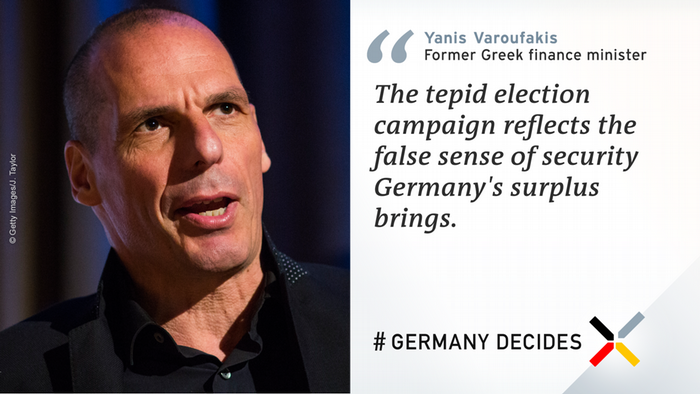 Complacency is a country's worst enemy. My compatriots were, once upon a time, lulled into a false sense of having "made it." I very much fear that a majority of Germans feel their land is "doing fine."

That the federal election campaign is proving such a tepid affair is a reflection of the false sense of security generated by Germany's three surpluses: Companies save, households save, the Frankfurt banks are awash with monies sent to them from other European countries, and even the federal government budget is in surplus. But these surpluses are the sign of weakness, not strength. They are the harbingers of significant current and future hardship for most Germans now and in the future.

Think about it for a minute: A current account surplus of almost 10 percent of national income means that the nation must take its savings and send it abroad to be invested in deficit countries. Is this a prudent thing to do, especially when German capital abroad is creating bubbles bound to burst (as they did in Greece and Spain)?

Also, how smart is it to rely on the money influx into the Frankfurt banks to cover up their insolvencies, especially when this tsunami of foreign monies is flooding Germany because their Italian or French owners are losing hope in their own countries' economy? Finally, how rational is it for the federal Finance Ministry to celebrate a budget surplus that is due to the negative interest rates which (a) are crushing German pension funds and (b) causing the famed Swabian housewife to lose faith in the German political establishment?

Germany needs a frank debate among its citizens on how to deal with the threat that its surpluses are posing to German society, just as much as Greece needed a similar debate, some time ago, on the threat posed by our deficits. After all, for every surplus there must a deficit somewhere else within a monetary union. To have the political establishment celebrate imbalances as signs of economic health, just because Germany is blessed with their surplus side, is to misrepresent to the German public a source of troubles as evidence of success.

Taking a look at history, Germany rose to envy-of-the-world status as a result of a social contract that offered its working class strong protection (and seats on the boards of directors of large companies) in exchange for a flexible, rule-bound, liberal environment in which business could get on with it. But this was only possible while the United States was managing the macroeconomic environment on behalf of Europe, and of course Germany. Alas, since the 2008 crisis, America can no longer perform this role and the German working class experiences, year by year, day by day, the fragmentation of this protective shield. It is now up to Germany and the rest of us Europeans to construct a rational mechanism for recycling within Europe our deficits and surpluses. If we fail, Europe will fail, Germany will fail and civilization will be imperiled.

Judging by the current pre-election debate, none of the parties of government are even interested in having this debate. Thankfully, there are many smart members of existing parties that recognize the importance of this reorientation of German politics. The German members of DiEM25, our Democracy in Europe Movement, are working feverishly to bring about a coalescence of these political actors into a new political movement that puts on the agenda this central issue. It is what Germany needs. It is what Europe needs.

Yanis Varoufakis is a professor of economics at the University of Athens and co-founder of the DiEM25 group. He served as Greek finance minister as a member of the Syriza party from January to July 2015, leading his country's negotiations with the EU over the Greek debt crisis.

Coronavirus: US reports first case of omicron variant 47m ago