Deeply divided when it comes to fans' favorite teams, Lebanon's football mania took a nasty turn when one fan was stabbed for criticizing Germany's losing performance in the World Cup. Anchal Vohra reports from Beirut. 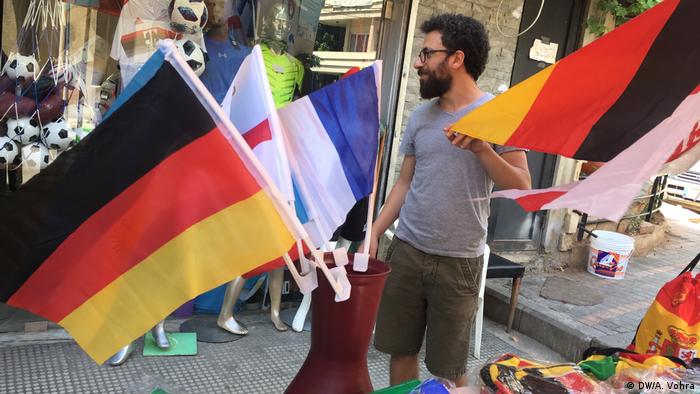 When Pele popularized football as "the beautiful game," neither he nor anyone else could have imagined how far fans' passion would take them.

On Wednesday, Mohamad Zaher was stabbed to death for merely celebrating the victory of his favorite team – Brazil – in a knock-out match.

The 25-year-old Lebanese man was at his brother's cafe, frequented by local youth who relish football games, while puffing on an "argeileh" or shisha, a flavored water pipe that is a popular social pastime in the region. He was crazy about football, like many Lebanese.

Brazil's victory left Zaher euphoric, especially because it came along with the elimination of defending champion Germany, who could have given the Brazilians tough competition at a later stage. Along with others at the screening, he cheered his team on and expressed his excitement by setting off firecrackers.

According to security officials who spoke to DW on the condition of anonymity, at some point Mohammad also vocally berated the German players for their unconvincing performance that evening against South Korea.

Police say his criticism of the German team provoked two Germany fans, Shafik Shams and Hussain Braytee, who were mourning the German team's exit from the tournament, barely a few meters away from the cafe. An argument ensued and before anyone could make sense of it, the altercation turned violent.

Mohammad's brother Abed, the cafe owner, was present on the scene. "The attacker chased us with a knife," he told DW. "My brother got concerned about our little nephews and shut the cafe's glass door to protect the children, but the attacker broke in and thrust his knife straight in my brother's heart," Abed said. He rushed his brother to the hospital but the gash was lethal. Within a few minutes, Mohammad passed away.

Mohammad Zaher is remembered as a fun-loving, polite and handsome man by his friends. His neighbor, Mr. Hussaini, says that "the boy was carefree like others his age. It's a really sad incident."

Mohammad, who was single, had been working abroad in Africa – in the transportation sector in the Congo – and had returned to Lebanon barely six months ago. He helped out at his brother's cafe for the time being.

The Zahers were ecstatic their boy was back. Now his untimely death, over a mere sporting disagreement, has left them inconsolable. "My mother has lost her mind," Abed says, as he struggles to hide his tears. But in a split second, Abed's grief seeks revenge. "Maximum punishment for the guilty. If not, for our life we will take theirs."

Mohammad and Abed live near Dahiye, a suburb in Southern Beirut infamous as the hub of Hizbollah. While the group has nothing to do with the incident, and it is an inexplicable crime, research on football hooliganism suggests socio-economic conditions play a role in football-linked crimes.

Professor John Williams of the University of Leicester has done extensive work on football and society. "Identification with a football club or nation can offer the chance of vicarious success. This can produce over-identification – seeing football teams as an extension of the self itself," he explains. 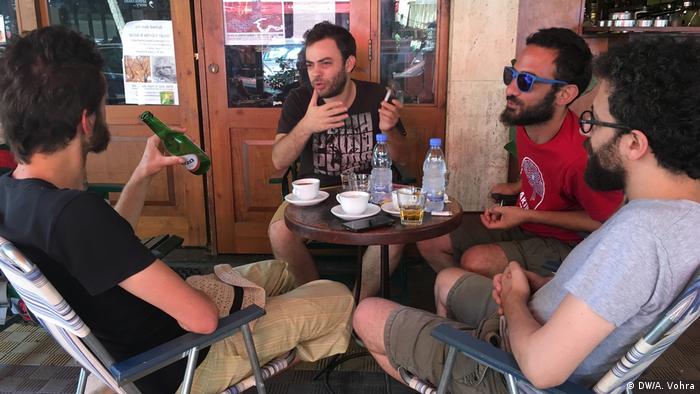 Nadim (second from left), a Lebanese football fan, and friends discussing the 2018 World Cup in a Beirut cafe

Nadim is a staunch fan of Germany who displays a picture of Berlin's iconic Brandenburg Gate on his WhatsApp profile in solidarity with his defeated team. While he splits Lebanon traditionally into Brazil or Germany fans, he says that Mohammad Zaher's murder has scarred this World Cup and made all fans like him, regardless of their affiliation, "very, very sad."

Nadim links the infatuation with the sport and the respective teams that Lebanese fans support to the country's active fault lines. He says football unites the Lebanese as much as it divides them. While the coming together of people from different sects, religions and political beliefs to support their team is a positive, it also inflames passions very easily.

He pins the blame on a culture of violence in Lebanon. "We have had so many wars, so much violence, that the Lebanese kill each other because of the anger they harbor–football is one provocation, but there can be others too."

Football rowdiness isn't limited to Lebanon. Already during this year's World Cup, at least two separate incidents have been reported from the United Kingdom. In one, a football fan was thrown off a car hood; in the other, British football fans smashed glasses and caused mayhem in a pub. The Russian press has also reported disruptive fans creating a nuisance in stadiums. In the past, worse has happened. A French policeman suffered brain damage after being severely beaten by German fans in 1998's France versus Germany match.

Over the years, scholars have done significant work aimed at how to control mobs that pour into the streets, pubs and stadiums at match time, but individual acts of football hooliganism remain difficult to contain. Professor Williams says while the fans of other sports see their sport as a distraction, and can shrug off the losses easily, football fans are inclined to obsess. "So when things go wrong," he says, "the self feels damaged and violent frustration can take over."

And just like that, Mohammad's life was cut short, leading his family to seek blood revenge. In a moment of madness, the beautiful game became quite ugly.