Germany downed Serbia in dominant fashion to maintain their unblemished record in 2023 World Cup qualifying. The 5-1 win only tells half the story of a side still struggling to play to their full potential. 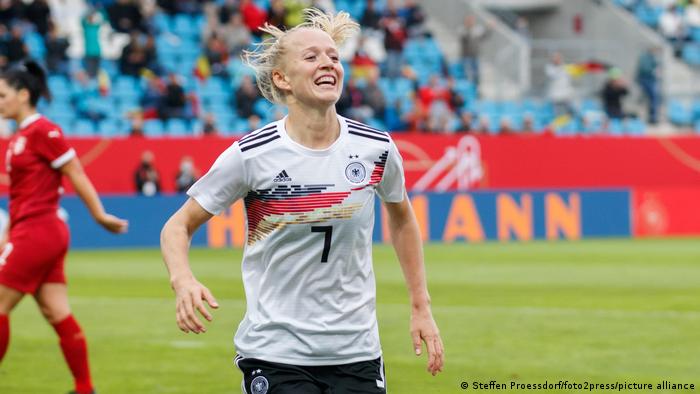 Despite a shaky start, Germany downed Serbia in dominant fashion to maintain their unblemished record in 2023 World Cup qualifying. Lea Schüller’s brilliant four-goal heroics in the second half played a major role in the DFB Frauen saving face.

"I don’t know what stopped us in the first half from doing the same things as we did in the second." Schüller said after the match. "We had more space in the second half. The crosses came. We were better positioned."

Germany were the undisputed favorites coming into this match, a win was seen as the bare minimum. But the first half again demonstrated that this was a team struggling to play to their full potential for a full 90 minutes.

Germany struggle to get in the groove

Germany's dominance, determination and dynamism are often overshadowed by how long it takes for them to get into a game. They still suffer from lapses in concentration, not to mention the slew of avoidable mistakes.

Despite convincing wins, that was the case against Bulgariaand Serbia on Tuesday when Nina Matejic capitalized on some haphazard defending to land an early sucker punch. The endeavor and ideas are there, but putting them into practice still a work in progress.

"They all want to give it their best, but fact is there are still lots of bad decisions that are made on the pitch," said coach Martina Voss-Tecklenburg. "We made too many individual mistakes."

In both games, it took Germany roughly 20 minutes to establish a flow or anything resembling a collective rhythm. Only this time against Serbia, it was worse as it took them until the second half to turn into a dangerous attacking force.

"Maybe because we are still getting to know each other," said defender Lena Oberdorf. "But it’s good to know that we can play like that. The second half, that is our standard and we have to start like that in the future." 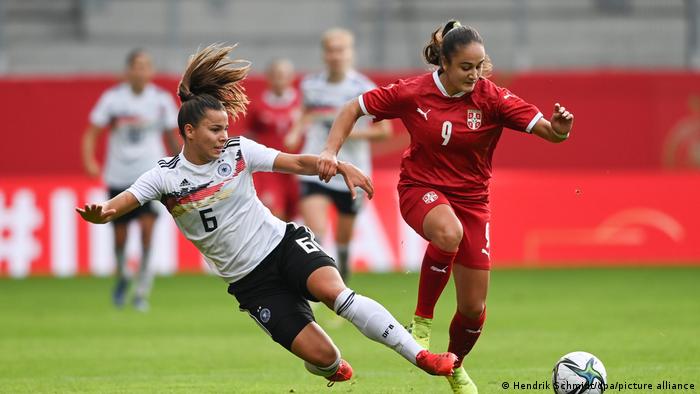 When they do channel their energy, Germany can be virtually unstoppable. Serbia couldn’t keep up as they kept finding the back of the net with Schüller the most prolific, scoring four of their five goals.

Woven into Germany's winning performances are the reoccurring mental lapses. A minor problem for now, but one which could prove costly against elite opposition.

The fact that Germany are often the makers of their own downfall can be easily overlooked due to the sometimes thumping scorelines. Aware of the nervousness on display, coach Tecklenburg has openly discussed her team’s need to learn to deal with pressure in a more positive manner.

Nevertheless, this team is still young. Tecklenburg said many still "have to gain experience" at the highest level even if that means "making mistakes." It's all part of a learning process and some are more advanced than others on account of playing in the Champions League. To that end, the team has already enlisted the help of legend Birgit Prinz, who is working as the team's psychologist. Defender Sophia Kleinherne told DW before the match that not only is Prinz a role model but "the players trust her with eyes closed...and that they can talk to her about anything."

She added that the benefit is two-fold as her advice not only applies to national team performances, but also those at club level.

It was recently announced that Warner Bros Entertainment will be producing a six-part series on the DFB Frauen, but the road towards greater visibility in women’s football is still a struggle on the ground.

1,600 tickets were sold on Tuesday, which was less than half the limited capacity of 5,000 that was allowed due to COVID-19. The 4pm start though, meant fewer fans could make it to the stadium and even fewer could watch on television.

Far from ideal circumstances when part of the goal is to drive the growth in popularity of the women's game. For now, that is the least of Germany’s worries. Their first priority is working on their mental game so that they can aspire to title-winning form next summer.