Hosts Russia thrashed Saudi Arabia in the opening match of World Cup 2018. Denis Cheryshev and Aleksandr Golovin both scored early contenders for goal of the tournament in an emphatic 5-0 win. 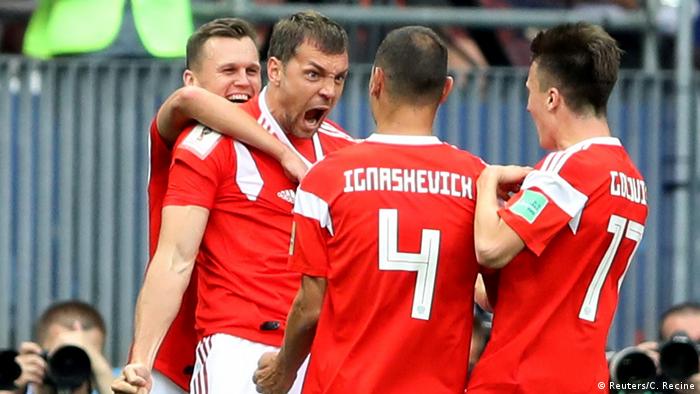 Russia got their World Cup campaign off to a stunning start with a 5-0 thrashing of Saudi Arabia in Moscow that was rounded off by a pair of sensational strikes.

Saudi Arabia had proven themselves to be full of running in their friendly defeat to Germany in Leverkusen last week, almost embarrassing the world champions with a late equalizer, but were severely lacking in quality in the Luhzniki Stadium – despite recording over 62 per cent possession, a record for the natioan at a World Cup.

Mohammad Al-Sahlaawi came closest to an equalizer with a diving header which Ilya Kupetov tipped onto the post, before Denis Cheryshev doubled Russia's lead just before halftime. Picking up a pass from Smolov inside the box, he wrong-footed two Saudi defenders when he cut inside and smashed past the goalkeeper.

With twenty minutes remaining, substitute Artem Dzyuba made it three with his first touch – taking advantage of more slack Saudi defending just one minute and 29 seconds after coming on.

But Russia saved the best till last, turning on the style in injury time. First, Cheryshev fired home his second of the game with a slick, lobbed finish with the outside of his foot from the edge of the box, before Aleksandr Golovin curled home an even later free-kick.

The only blemish in an otherwise strong start for Russia was an injury to Alan Dzagoev; the CSKA Moscow midfielder's World Cup looks to be over after he appeared to tear a hamstring.

Russia's next opponents are Egypt on Tuesday, while Saudi Arabia will face Uruguay on Wednesday. 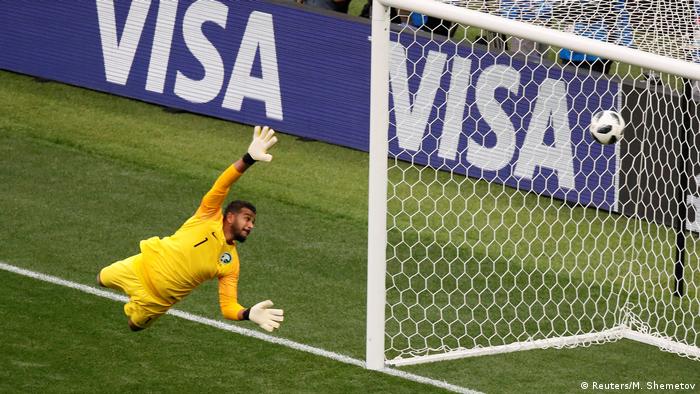 FULL TIME: That's it. A memorable, emphatic and entirely deserved win for the hosts lit up by two exceptional strikes from Cheryshev and Golovin in injury time. Saudi Arabia were woeful and Uruguay might fancy their chances of beating Germany's 8-0 scoreline against them from 2002 when those sides meet next Wednesday. Our full match report will be along here shortly.

90+5 - GOAL! Another one. This time a beautiful free kick curled round the wall from the edge of the box. This game suddenly looks a little more memorable than it did 10 minutes ago.

90+1 - GOAL! This is a beauty to wrap things up. Cheryshev takes in a knockdown from his fellow subsitute Dzyuba and curls one beautifully over the keeper with the outside of his left boot. What an impact Russia's subs have had!

88' - This is looking very much like the closing stages of an international friendly...

84 - Golovin tries to ice the cake with an ambitious effort from long range. It is not good. But Russia will not care. Muhammad Al-Sahlawi off, Muhammad Asiri on for Saudi Arabia.

79' - Cheryshev almost gets on the end of a cross but the defender just gets there.

76' - This has been as comfortable as Russia could possibly have hoped for. For anyone that isn't Russian, it has to be one of the more disappointing World Cup openers. Let's hope it gets better.

71' - GOAL! Game over, and it's another substitute that does the business. Less than a minute after coming on, Artem Dzyuba nails a back post header from Aleksander Golovin's cross to seal it for the hosts. The camera cuts to Gianni Infantino and Vladimir Putin looking various shades of pleased-with-themselves.

70' - A change for Russia as Smolov is replaced by Dzyuba. A straight striker swap that one.

68' - Almost a third for Russia. Zobnin drives in to the box and hits one low at Al-Mayoof. The Saudi keeper spills it but just about recovers before the rebound is tapped in.

64' - Saudi Arabia make their first substitution. Abdullah Otayf replaced by Fahad Al-Muwallad.  The new man scored the goal that secured the Saudis their spot in the World Cup. They need a something similar from him here.

61' - Back to the midfield battle but Saudi Arabia have at least stopped giving the ball away quite so often.

56' - That's Saudi Arabia's best chance. A lovely ball from the left finds the corridor between Russia's defenders and Akinfeev but neither Al -Sahlawi or Taiseer can get the touch. That was probably all it needed.

52' - Samedov finds a pocket on the edge of the box and lines one up. But it flies harmlessly over.

50' - Smolov is almost in. He times his run well to pick up a long ball from the left but his touch isn't quite good enough and its toed away for a corner which is easily dealt with.

48' - Little to report so far, the play working its way around without much purpose.

46' - We're back underway at the Luzhniki Stadium. Can Saudi Arabia find a way to trouble the hosts this half?

HALF TIME: A fairly convincing start from the hosts, who took advantage of a very poor Saudi side to take a two goal lead in to the break. The visitors have had a couple of half chances but really don't look capable of posing a genuine threat at this stage. It could be some party in Moscow tonight.

43' -. GOAL! Russia work the ball from front to back and then from right to left, thanks in part to some woeful Saudi defending. The final ball to Cheryshev looks to be short but the substitute shows brilliant feet to find half a yard and lash home.

41' - Cheryshev jinks his way in to the Sauid box but runs out of space.

35' - Russia deal with a Saudi attack and break rapdily through Zobnin. He's fouled but advantage is played and the ball runs to Smolov, who also goes down - this time in the box. But Osama Hawsawi timed his tackle well and got the ball.

31' - Zhirkov clips his opponent on the edge of the box but Salman's free kick doesn't beat the first man.

28' - The Saudis were shocked by Russia's excellent start but have started to get hold of the ball a little more in the last few minutes. Al-Dawsari's confidence is boosted enough by that to try a speculative long ranger but it's a long, long way over.

25' - A potentially major blow for Russia as Alan Dzagoev, one of their major creative forces, leaves the field. It looks a lot like a hamstring pull, which would probably end his tournament. Denis Cheryshev replaces him.

21' - The men in green have created their first chance. The ball is whipped in to the box and Alsahlawi is almost on the end of it. But it's at an awkward height and Russia scramble it away.

18' - The Saudis are rocking a bit here. They've been pinned back for large periods of the match already.

15' - So nearly two. Russia are absolutely dominant here. Smolov gets on the end of a cut back from the right but his effort deflects upwards, allowing the Saudi keeper to claw it away. But replays show it wouldn't have counted anyway, there was an offside in the build up.

12' - GOAL! It's been coming. After another couple of half chances, a Zhirkov corner is cleared, eventually landing at the feet of Golovin. He lifts a ball to the back post where Gazinsky is unmarked and powers a header home. Huge cheers from the Moscow crowd.

10' - Zhirkov wins himself another corner but balloons it far beyond the far post. Saudi Arabia break quickly but the crossfield ball is overhit. I think we can give Zhirkov the benefit of the doubt and say he was aiming for the man lurking at the back post, but it was a strange delivery.

8' - Saudi Arabia are grateful to their skipper Osama Hawsawi, who snuffs out a dangerous Russia attack.

6' - The Saudis get their first chance to attack through Yasser, who wriggles free down the left. His cross is blocked and a half-hearted claim of handball is waved away.

3' - The hosts start on the front foot and win an early corner, but Zhirkov's delivery is headed clear.

16:57 - After an entirely thrilling Gianni Infantino speech, both teams belt out their national anthems and we're ready to go.

16:54 - Putin is dragging this out somewhat, so let's finally get back to the football. It looks like both sides will line up in 4-5-1 formations but, with both significant underdogs in their other group games, the need for a win could make this more entertaining than many expect.

16: 50 - Both teams are out on the pitch and Vladimir Putin is in the spotlight and about to deliver a few pre-World Cup words. "We are sincerely happy to host the World Cup in our country.," he says. "Football is truly loved here. Russia is an open, hospitable and friendly country." Some may not entirely agree with the last sentence there.

16:44 - It's over, at a mercifully short 14 minutes. The stage has now been dismantled and some football should break out soon.

16:38 - The pair join forces to sing Angels as 32 individuals, one representing each nation, enter the field led by a German representative in an elaborate hat that I think is supposed to look like an eagle. Ronaldo has a kickabout with the wolf mascot.

16:35 - Robbie makes way for Russian soprano Aida Garifullina, who enters on some kind of litter decorated with, I think, butterflies.

16:32 - And the opening ceremony is underway. After some colorful performers emerge from the tunnel, we get a quick glimpse of Brazilian legend Ronaldo and then Robbie Williams starts shouting/singing depending on your perspective. Let Me Entertain You, naturally.

16:30 - The trophy - or should I say Germany's trophy? - is in the stadium. It's in an exceptionally fancy case and is hanging out with Spanish goalkeeping great Iker Casillas.

16:25 - A fair bit of experience in both tonight's sides. Russia go with Sergey Ignashevich, the 38-year-old CSKA Moscow man tempted out of retirement for the tournament at center back while Saudi pair Osama Hawsawi and Taiseer Al Jassam have 136 and 133 caps respectively.

16:20 - Now we have official confirmation of both teams from FIFA. These may be the two lowest ranked teams in the tournament but the eyes of the world will be on them in 40 minutes.

16:15 - The atmosphere in Moscow is, by all accounts, pumping. The hosts are out warming up on home turf and the anticipation has been cranked up a further notch. More than 80,000 expected tonight.

16:10 - The hosts are keen to get this party started and have announced their team long before their opponents. Fedor Smolov the man to watch for the Russians.

16:00 - Hello! It's finally here, the day we've all had circled in our mental diaires since Germany's win in Rio almost four years ago. The time for talking, transfer gossip and coach sackings is over and now we can sit back and savor 64 matches over the next month.

We start where we finish on July 15, in the Luzhniki Stadium in Moscow where the hosts surely need to start with a win if they're serious about escaping a group that also includes Uruguay and Egypt, who play tomorrow. The big news from that one is that Mo Salah looks set to win his fitness battle.

While much of the attention will be on the Russians tonight, both on and off the pitch, the Saudis put up a decent showing against Germany last Friday and look pretty up for this one, if the tweet below is anything to go by.

The opening ceremony should start around 16:30 and will apparently feature Robbie Williams and 500 "local performers" including trampolinists and dancers.

You can read more about Russia's chances here while we wait for things to get started and find out about how Germany are coping with external pressures here.