World champion Magnus Carlsen is without a win and struggling to find top gear at the World Chess Championship in London. DW chess expert Holger Hank offers five possible reasons why he can't get it going. 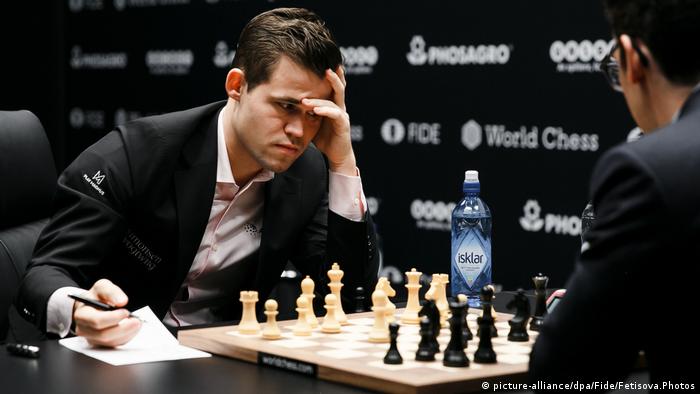 He's won every world title since 2013, is top of the world rankings and is widely considered to be the best chess player of all time. But even at just 27 years old, Magnus Carlsen's chess doesn't look quite as dazzlingly brilliant as it did a few years ago.

His latest title defense, in London, is proving to be quite a slog and the Norwegian has drawn each of the first eight games against American challenger Fabiano Caruana. In an interview with DW, German chess coach Dorian Rogozenco questioned the form of the man often dubbed the "Mozart of Chess."

"Magnus Carlsen has not quite managed to reach his best in the last few games, so I would even say Caruana is favorite," Rogozenco said. So what's up with Carlsen?

1. He's developed a fear of failure

Is Carlsen not ready to strike when the chance presents itself? That's a question that a champion in the midst of a title battle does not want to hear, but it's one Carlsen has been forced to confront.

"On another day, in another year, I might have found a way to exert more pressure," he admitted after the draw in Game 7.

While Carlsen still loses remarkably few games, victories are not flowing as freely as they once did and his aura of invincibility is fading. Perhaps aware of this, Carlsen has become more risk-averse, meaning he is harder to beat, but also finds it harder to get across the line. A vicious circle.

2. The 'Carlsen Method' no longer works

The Norwegian has long seemed to have a sixth sense for what will happen on the 64 black and white squares and that, combined with a fierce competitive edge, was the hallmark of his play. Carlsen doesn't rely on all-out attack but often finds a way to turn unorthodox positions to his advantage, gradually improving the state of play until he has the edge.

But he has a problem: His opponents have adapted to this style. Any player who faces Carlsen knows they'll be under pressure for a sustained period — slow draws are not the Norwegian player's game. So far, Caruana has stood up well to the examination.

The Queen's Gambit,  Rossolimo or the Petrov Defense  — Carlsen and his team don't put a huge amount of emphasis on their openers, preferring tried and trusted methods over developing new variations. Instead, Carlsen tries to maneuver himself in to a "Carlsen position" early on, particularly with the white pieces.

The problem is that Caruana has adapted well to this strategy so far. Many experts, such as former World Champion Gary Kasparov, believe Carlsen needs to improve in his opening gambits. Whether this is something that can be changed in the middle of a World Championship remains to be seen. 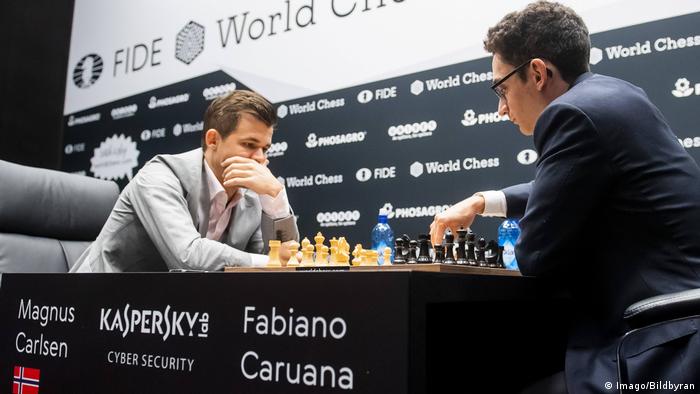 The saying "you're only as good as your opponent allows" is as true in chess as it is in many a sport. In recent years a number of players,players like Carlsen, who have spent their life training with the use of computers, have emerged. Caruana is the most complete of the challengers. However, Shakhriyar Mamedyarov from Azerbaijan, for example, has become one of the world's best in recent years and is a genuine pretender to Carlsen's throne.

The up-and-coming players all play active chess that spectators enjoy, and have closed in on Carlsen in terms of the world rankings. They also all have bigger bags of tricks when it come to their opening moves.

5. Carlsen still has everything under control

Despite Carlsen's travails, the contest is still delicately poised at 4-4 and, with the exception of games six and eight, he has often found himself under pressure.

While, to some, backs-to-the-wall performances may take their toll, Carlsen knows how to deal with the rising tension inherent in these occasions and if the string of draws continues until the 12th game, his experience could prove critical. When time is short, the Norwegian comes into his own whereas Caruana can struggle. The champion still has a few cards left to play.