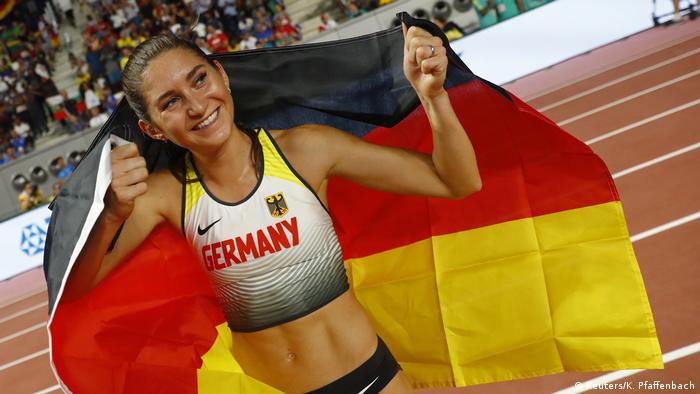 Germany are off the mark at the World Athletics Championships in Doha after Gesa Krause won bronze in the women's 3,000-meter steeplechase for the second time in a row.

The 27-year-old from the western city of Trier ran a German record time of 9 minutes, 3.3 seconds, to come in third, behind the new champion and world record holder, Beatrice Chepkoech, of Kenya,  with 8:57.84, and defending champion Emma Coburn, of the United States.

Krause came in a surprise third in the same event in Beijing four years ago, but this repeat achievement is less of a surprise after a period of intense preparation saw her break her own German record back in August.

"I've dreamed of this," Krause said. "I wanted it so much. It was a battling performance that makes me proud and happy."

"That wasn't just the result of her work over the past year, but over the past 10 years," her coach, Wolfgang Heinig, told the German broadcaster ZDF. 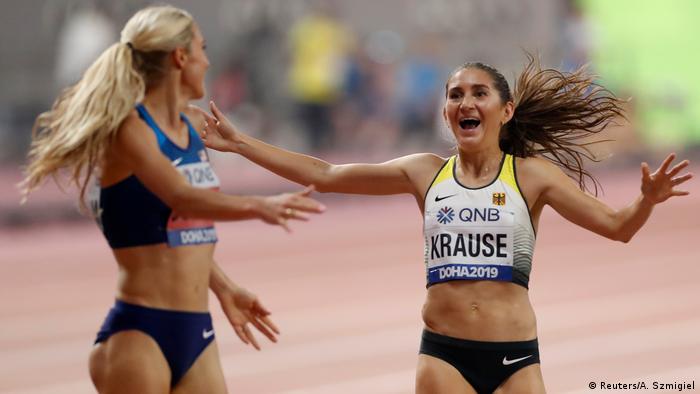 Krause celebrates her third-place finish in the women's steeplechase

"I was a bit unsure during the first kilometer because I didn't feel too well and I thought it wasn't going to be my day," Krause said. "Then I relaxed towards the end: Sometimes you just have to go up a gear."

Her time in Doha makes her the second-fastest female European steeplechaser in history, after Russia's Gulnara Galkina, who ran a then-record 8:58.81. Current Olympic champion Ruth Jebet, of Bahrain, did not take part in Doha after testing positive in a doping test.

There was less to celebrate for Krause's compatriot Imke Onnen, who could only manage ninth place in the women's high jump. Mariya Lasitskene, one of 29 Russian athletes competing under a neutral flag, won gold after clearing 2.04 meters with fewer failed attempts than Ukraine's Yaroslava Mahuchikh, who took silver.

Bronze went to Vashti Cunningham, of the United States.

Edris, who upset Mo Farah in the Briton's farewell to the event two years ago, used a late kick to beat countryman Barega to
the finish. An earlier attack from Jakob Ingebrigtsen with 350 meters remaining proved to be premature as the Ethiopians overtook him on the final bend. 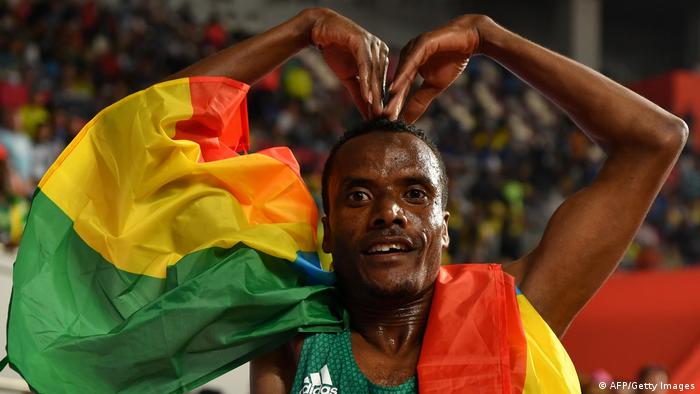 Ethiopia's Edris celebrates his 5,000-meter gold with an M-shaped gesture.

The race was considered more wide open than ever, with favorites Yomif Kejelcha and Joshua Cheptegei not in the field as they focus on the 10,000 meters.

And Edris took full advantage, completing the 12.5 laps in 12:58.05 and kicking off some of the biggest celebrations yet, with a flag-waving contingent from Ethiopia filling two full sections of the otherwise sparsely populated stadium to cheer on their compatriots.

The Ingebrigtsen brothers may have fallen short, but there was still cause for celebration in Norway, as Karsten Warholm held off his two biggest rivals to claim back-to-back world titles in the men's 400-meter hurdles,

A visibly pumped Warholm, who gave out a warlike scream during the dramatic light show ahead of the race, led the field into the home straight and held on to win in 47.42 seconds over the US's Rai Benjamin (47.66) and Abderrahman Samba (48.03), who got the first medal for home team Qatar at the championships.

Elsewhere, Germany's Martin Wierig finished eighth in the men's discus, as the medals went to Daniel Stahl, of Sweden; Fedrick Dacres, of Jamaica; and Lukas Weisshaidinger, of Austria.

China's Feng Bin won a surprise gold in the discus, beating American Olympic champion Valerie allman in her own backyard. There was also success for a runner who this year switched her allegiance from Kenya to Kazakhstan.

At the 2022 World Athletics Championships in Eugene, Oregon, the best athletes in the world are joined by the best sports photographers. Here are some of our favorite pictures.