Workshop: ″Behind closed doors? Risks and opportunities of communication in closed digital spaces″ | About us | DW | 19.12.2019

Workshop: "Behind closed doors? Risks and opportunities of communication in closed digital spaces"

On January 16, 2020 DW Akademie and the German Institute for Human Rights is holding a half-day workshop on communication in closed digital spaces. The event takes place in Berlin. 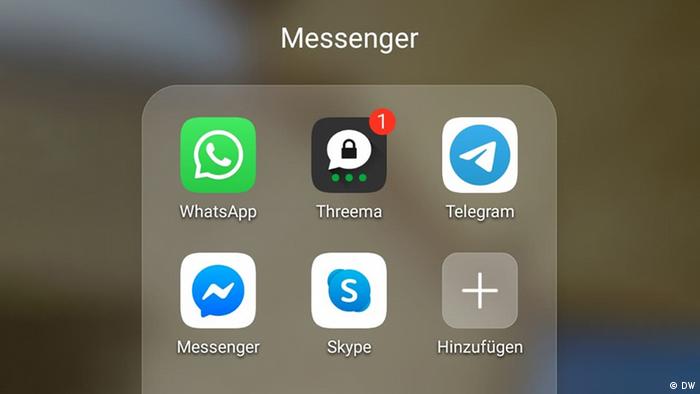 Social media services such as WhatsApp and Signal enable closed groups to communicate. This offers societies opportunities as well as challenges: closed communication rooms can be "safe spaces" for vulnerable groups but can also be misused for spreading hate, fake news and violence.

What effect does an increasing shift of communication to closed digital spaces have on social debates and democratic participation? How can the media take up issues discussed there? How can threatened groups in countries with intense state digital surveillance exchange information? And what possibilities do closed spaces open for radicalization and populist movements?

These are some of the questions DW Akademie and the German Institute for Human Rights would like to discuss with you, and invite you to take part in the workshop "Behind closed doors? Risks and opportunities of communication in closed digital spaces". The aim of the workshop is to bring together development cooperation actors and the media, and to learn from each other in an interactive, international forum.

Summary of the results of the day, moderated final round with representatives from the workshop sessions

You are invited to continue the conversation in an informal setting after the workshop.

Julius Endert works as a project manager and consultant for the department Policy and Concepts at the DW Akademie. His work focuses on digital innovation, knowledge management and consulting for the DW Akademie's media development work. He is also involved in research projects on digital topics. Before joining the DW Akademie, Julius worked as a freelance digital consultant, journalist and trainer. He was co-founder of the video production company "Blinkenlichten Produktionen" and head of the editorial department of Handelsblatt, Germany's largest financial daily newspaper.

Nina Eschke is Senior Researcher and Policy Adviser in the International Human Rights Policy Department at the German Institute for Human Rights. She is currently working in the area of development policy and human rights. Her focus includes issues such as political and civil rights, human rights defenders, shrinking space and digitization. Prior to joining the Institute, Eschke worked for the United Nations' Development Program in Indonesia, various civil society organizations and as a freelance journalist in the UK and Germany.

Jovana Gligorijevic is a journalist, feminist, social activist and deputy editor-in-chief of the weekly newspaper Vreme ("Time"). She has had personal experiences in the permeability of so-called closed social media groups and has been a victim of hate campaigns. In cooperation with the DW Academy, Jovana Gligorijevic has developed a youth portal to reach younger generations with media content.

Juliet Nanfuka is a journalist focusing on the interface between society, politics and technology. She works at CIPESA in Uganda, which is the partner organization of the DW Academy in the Woman@Web project. CIPESA focuses on the promotion of an integrative IT policy that facilitates the use of digital technologies and thus promotes socio-economic development in South and East Africa. For Women@Web, Juliet is responsible for research on cyber bullying and digital challenges for women online. Studies have been conducted in Uganda and Kenya.

Najwa Saqal is a social scientist and works in the International Human Rights Policy Department at the German Institute for Human Rights. She applies qualitative research methods to analyze and understand the attitudes and behavior of population groups on specific social issues. Her research focuses on the integration of refugees. She is currently working on issues regarding religious freedom and combating hate speech in social media. Saqal has also worked on project development for NGOs and political foundations in the MENA region.

Abeer Saady Soliman is war correspondent, researcher, media consultant and trainer with 28 years of professional experience covering events in conflict zones within the Middle East, Africa, and Asia. She works as a media consultant for development projects in conflict areas and focuses on the consulting and training in the areas of safety of journalists, understanding and dealing with radical groups (especially the Islamic State), covering and countering terrorism, self-regulation and establishing codes of ethics, diversity and media, establishing media unions and capacity building trainings.

Sayed Yousif Al-Muhafdah is the vice president of Salam for Democracy and Human Rights and a board member at the Bahrain Center for Human Rights. Having worked as the head of documentation in Bahrain from 2007 to 2013, he has been arrested on many occasions and spent several months in prison on political charges. In the Spring of 2014, Al-Muhafdah fled into exile in Germany, following continuous judicial harassment and threats to his life. Currently living in Berlin with his family, he continues to work as a human rights defender, promoting awareness throughout Europe about issues affecting Bahrain.

Language:
The workshop will be held in English.

Registration:
The event is aimed at experts from the fields of media development, development cooperation, journalists and human rights activists.